[ The Korea Herald – Send E-mail ]
Illegal dog slaughter to be banned in Moran Market
By Kim Da-sol
Published : Dec 13, 2016 - 16:59
Updated : Dec 13, 2016 - 18:37
The slaughter of dogs will be abolished and butchery facilities removed from South Korea’s largest dog meat market, in a move which officials described as a step toward ending the animal welfare controversy over the industry.

The decision was announced Tuesday by Seongnam City Government and the vendors’ association of Moran Market, which, among others, represents its 22 dog meat dealers.

According to their agreement, the dog meat vendors will start removing slaughter facilities and dog cages from next week and will completely move them out by early May.

The city will provide financial support for them to refurbish their shops for new businesses. The agreement came as part of the city’s project to remodel the traditional, open-air market. 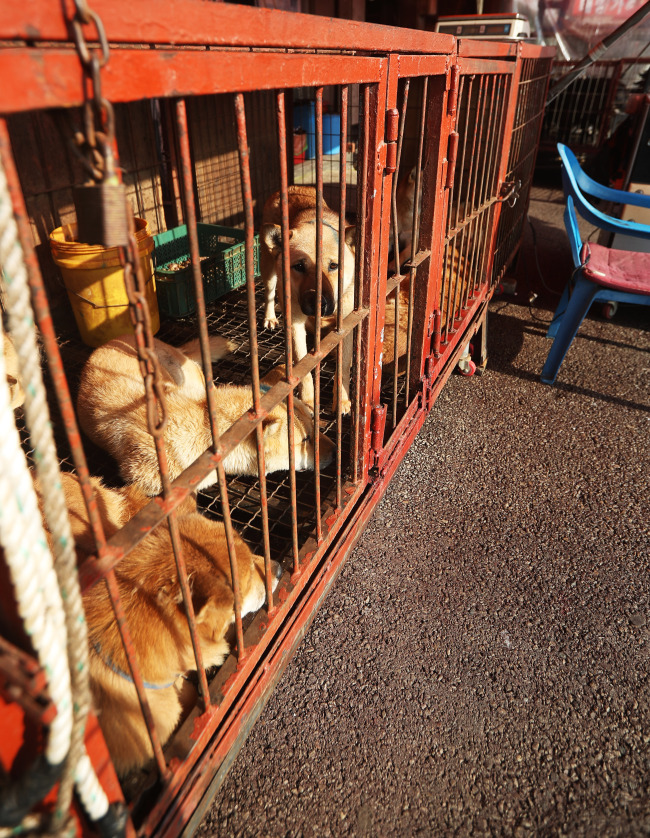 Dogs on sale to be slaughtered and consumed as food are seen inside a cage at Moran Market in Seongnam, Gyeonggi Province, Tuesday. (Yonhap)
“Starting off with the removal of slaughtering facilities and cages in the market, we will ultimately stop the dog meat trade in Moran Market,” Seongnam city official Kang Won-gu told The Korea Herald.

Moran Market, which opened in the 1960s and sells almost everything from live animals to antiques, has seen at least 80,000 dogs sold either dead or alive each year. It supplies one third of all dog meat consumed in the country. Live dogs are kept in cages for customers to choose. They are then slaughtered at the market in plain sight.

“This may be the beginning of (a long path toward) solving issues surrounding dog meat consumption. (The agreement) will hopefully eradicate the negative image of Moran Market,” Seongnam Mayor Lee Jae-myung told a press conference, announcing the deal with vendors.

Quoting Mahatma Gandhi, Lee also said, “Seongnam City will take the initiative to transform South Korea’s image since ‘the greatness of a nation can be judged by the way its animals are treated.’”

“Seongnam city took a big step toward changing the dog meat industry here,” Jang In-young, an official at the association said over the phone.

“But we will have to constantly monitor dog meat shops in the market (to see) if they really stop slaughtering dogs and change their business (after the agreement). The city government will also need to keep pushing the idea to ultimately ban the sales of dog meat here.”

With no laws having been passed to completely illegalize the sales of dog meat so far, butchery, farming and the consumption of dog meat have continued to thrive in a legal gray area.

The Livestock Product Sanitary Control Act, which governs the slaughter and disposal of livestock and the processing, distribution and inspection of livestock products, does not categorize dogs as livestock that can be processed as food.

Moran Market’s dog meat vendors have been under attack from animal rights groups around the world for their use of brutal methods to slaughter dogs such as through electrocution, hanging, or beating.

Noise and the odor caused by the slaughtering as well as animal carcasses have been a main source of complaints in adjacent residential areas. Residents often complained that the dog meat market tainted the town’s image.

It also plans to solicit opinions from residents, animal right groups, dog meat vendors and others through debate sessions.