Isenberg was speaking during a session at the Global Entrepreneurship Week Korea 2016 earlier this week to share his expertise with future business leaders and related officials.

During Monday’s talk held under the title “Entrepreneurship is the Future”, Isenberg spoke about Korea’s current business environment, and suggested what it should pursue. 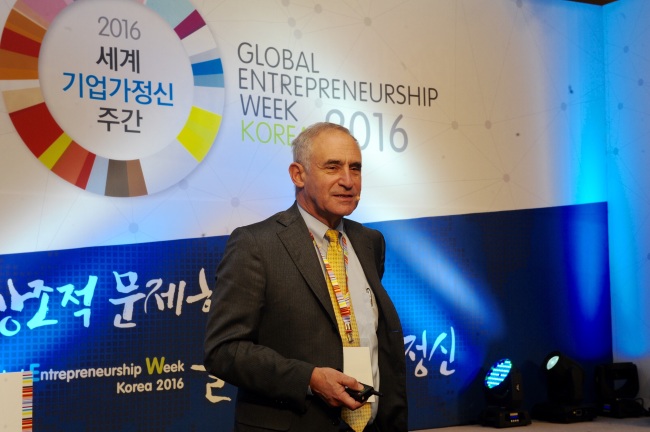 Daniel Isenberg, a professor of entrepreneurship practice, at Babson College speaks at Global Entrepreneurship Week Korea 2016. Korea Entrepreneurship Foundation
“It is time for Korea to move from startup to ‘scaling-up’ centered. Effective policies are ones that create an environment where businesses can enter and exist the market more easily. The government should play a minimal role.” Isenberg said during the session at the Sheraton Seoul Palace Gangnam Hotel.

Isenberg also highlightened on the need for a social atmosphere where it is OK for startups to fail.

Before taking his post, he also taught the Master of Business Administration program at Harvard University for 11 years.

Pointing to how the world has entered an era of the new normal of low growth and high unemployment, participants underlined startups as the new growth locomotive.

In order for Korean startups to lead future economic growth, Isenberg and participating officials, agreed with one voice that there has be a change in social atmosphere, which labels a failed attempt as an absolute failure.

According to Isenberg, the total number of startups does not represent the competitiveness of a country’s business environment, as seen in the case of Denmark and Israel where a few bright entrepreneurs spotted and developed good business opportunities.

Echoing Isenberg‘s point, Jochem Cuppen, global director of the Get in the Ring Foundation, which connects startups globally, also said society should acknowledge downfalls as part of entrepreneurship.

Cuppen added, it is OK for entrepreneurs to fail as long as they learn from their mistakes.

Participants attend a discussion during the Global Entrepreneurship Week Korea 2016 on Monday. Yonhap

In terms of the government's role, Isenberg said the government must play a minimal role, and focus on scaling-up existing entrepreneurs.

Isenberg pointed out, Korea needs to implement flexible and realistic policies on bankcruptcy of entrepreneurs.

Following Isenberg's statement, Takagi Shinjiro, adviser of the US-based global law firm Morgan, Lewis &Bockius, said that entry-level entrepreneurs are at a high risk of failing at one point, so a protection system is essential.

He added, Japan has recently implemented guidelines that prevent entrepreneurs from losing all their asset.

Meanwhile, as part of Korea’s scaling-up process, Isenberg said a greater emphasis should be put on sales than innovation, given that 80 percent of a firm’s growth comes on good sales.

The GEW Korea 2016 was hosted by the Small and Medium Business Administration for two days under the slogan that entrepreneurship will play a key role in creatively solving social problems.

The worldwide event takes place during the third week of November every year for entry-level and future entrepreneurs to realize their full potential through workshops, lectures and contests, organizers said.

This year, 162 nations are taking part with 9 million people participating across 30,000 sessions and venues.

The GEW began in 2007, led by GEW president Jonathan Ortmans, former prime minister of the United Kingdom Gordon Brown, and former president and CEO of the Kauffman Foundation Carl Schramm with 37 participating countries, including the US and China. South Korea joined the movement in 2014.