[ The Korea Herald – Send E-mail ]
Taekwondo medalist grateful for bronze at final Olympics
By KH디지털2
Publiished : Aug 21, 2016 - 10:29
Updated : Aug 22, 2016 - 09:47
Many athletes before him have accepted bronze medals begrudgingly, clearly not content to finish third when what they wanted was gold, but South Korean taekwondo fighter Cha Dong-min said Saturday he was grateful for his bronze.

Having already won an Olympic gold eight years ago perhaps makes it easier for Cha to live with bronze. However, it's actually not the success from the past, but a failure that makes him enjoy his prize more, regardless of its color. 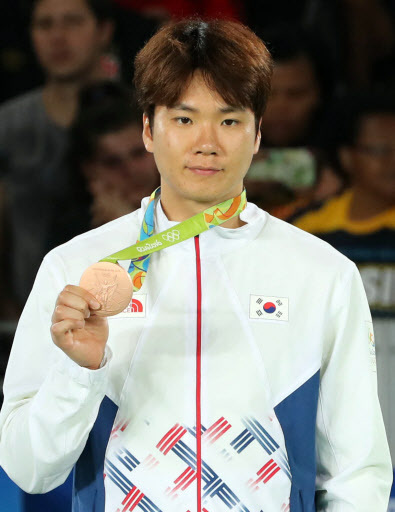 (Park Hae-mook/The Korea Herald)
By beating Dmitriy Shokin of Uzbekistan for bronze in the men's 80kg, Cha joined four of his teammates that earlier won a medal in Rio. Kim So-hui in the women's 49kg and Oh Hye-ri in the women's 67kg won gold medals. Kim Tae-hun in the men's 58kg and Lee Dae-hoon in the men's 68kg each won a bronze medal.

The productive Olympics follows a disappointing campaign four years ago in London, where South Korea picked up just one gold and one silver. Cha lost in the quarterfinals there and didn't get a reprieve in the repechage.

"Knowing what we suffered through in London, I am just thankful that I won a medal here," Cha said. "We've come a long way to Rio, and this has been an especially difficult competition because of the traveling. We've been working together very hard and I am glad we all have a medal around our neck."

Cha was the 80kg champion at the 2008 Beijing Olympics, but didn't even come close to retaining it four years later. Cha said the missed opportunity compelled him to endure four more years of rigorous training so that he could redeem himself.

South Korea had set out to win at least 10 gold medals here. Hours after Park In-bee won the women's golf tournament for South Korea's ninth gold, Cha set out on a quest to make it an even 10.

It was derailed with his loss in the quarterfinals. Still, Cha chose to look on the brighter side.

"I couldn't get our gold medal tally to 10," Cha said. "But I am grateful that I was able to add a bronze medal to Team Korea."

At 29 with three Olympics under his belt, Cha said he just might have fought his last match.

"I wanted to go out and give my coach (Park Jong-man) some gift," Cha said. "The best I could do was to win a medal. I couldn't win one in London but now I get to bring him bronze."