The half-page ad, which, according to the newspaper, was paid for by We The People Foundation, pretends to sell “magnificent, beautiful and spectacular” nuclear bombs, asking those with inquiries to contact Trump. 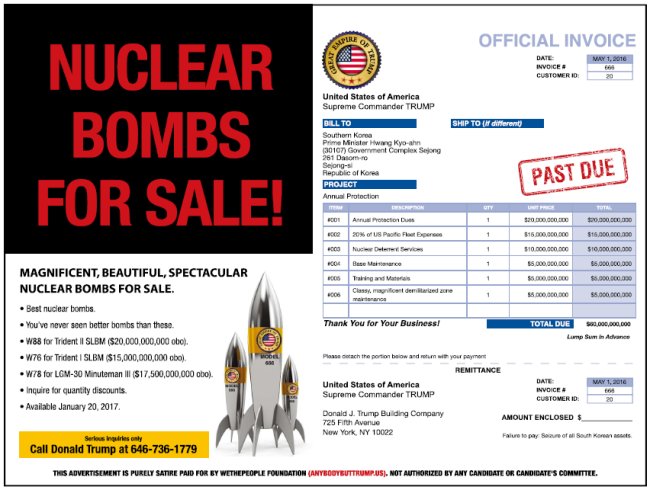 (The Korea Herald)
The advertisement also carries a mock invoice sent by U.S. “Supreme Commander” Trump to Korea’s Prime Minister Hwang Kyo-ahn, charging Korea for “annual protection dues” and more that adds up to a staggering $60 billion, payable in an advance lump sum.

In an interview with CNN in May, the U.S. candidate said South Korea should pay for all costs related to the U.S. troop presence in the country.

About 28,500 American soldiers are stationed in South Korea to deter North Korean aggression, a legacy of the 1950-53 Korean War that ended in a truce, not a peace treaty.

Failure to pay, the ad warns, will result in seizure of all South Korean assets.

“This advertisement is purely satire paid by We The People Foundation (ANYBODYBUTTRUMP.US),” it says.

The hard copy of the advertisement can be found in The Korea Herald newspaper this weekend at roadside paper kiosks and convenience stores.

This week’s The Korea Herald Weekender discusses fine dust problems in Korea and Korean reactions to Britain’s decision to leave the European Union.