More working men than those who are in school also said they felt pressured in gender roles, the study by the Korean Women’s Development Institute showed.

The institute surveyed 1,200 men and 300 women aged 15-34 in October last year to look into gender equality and conflicts that arise from gender-specific perceptions and roles. 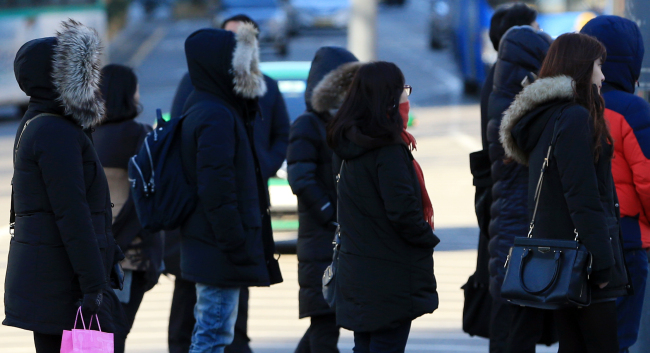 To questions about how they felt toward terms such as “Kimchinyeo,” “Doenjangnyeo” or “Seonggue,” 54.2 percent of men said they identified with them.

The terms are wordplays that have been used widely since 2000s to describe some women or South Korean women as a whole. They respectively refer to women taking advantage of men; those with vain preference for extravagance; and those who have undergone massive plastic surgery.

Debate has persisted over the reasons behind the phenomenon, including social discontent among the young, sense of crisis in hegemonic masculinity, and stronger emphasis on women’s rights and reverse discrimination.

The ratio of women agreeing to the use of the terms was lower at 24.1 percent.

The research showed that more men in the younger age group tended to agree with using such terms.

Those with “hostile” sexism or those who suffer from conflicts arising from gender roles tended to be fine with using the deprecating terms, the report said.

Out of all the respondents, 8.6 percent said they have actually posted writings online or on social media expressing hatred toward women.

On a scale of one to five -- with five being the most stressed – measuring the level of pressure they felt from gender roles, the average among male respondents was 2.45.

Some of the sources of conflict included: needs for success, power and competition, compatibility between work and home, difficulty in showing emotion, fulfilling family responsibility and restraint in showing affection toward same gender.

By demographic group, working men showed the highest at 2.50, while teenagers scored 2.39 and college students 2.42.

The paper said the results show that working men tend to feel more pressured to support the family, succeed socially and compete, while being equally burdened with maintaining the “superiority of men.”

Majority of the male respondents said they thought women in their 20s and 30s were in the most advantageous social position to live well in South Korea.

“This research shows that social criticism toward women among men tend to start from their teenage years, and they go on to believe that young women get more social advantages,” the research said. (khnews@heraldcorp.com)