[ The Korea Herald – Send E-mail ]
[Herald Review] ‘Songgot-Piercer’ breaks drama mold
JTBC series takes on Korea’s sensitive labor issue with realistic approach
By 원호정
Published : Nov 12, 2015 - 17:38
Updated : Nov 12, 2015 - 17:38
Webtoon-turned-drama “Songgot-Piercer” from JTBC is unusual in two ways. The first is its subject matter: labor rights. The second is the way in which it brushes off expectations of fantasy.

Although the series only has viewership ratings of about 1.7 percent according to Nielsen Korea, “Songgot-Piercer” has garnered interest and online buzz, constantly ranking highly on monitoring metrics from Daumsoft that tally mentions on Twitter.

Labor rights has never been the direct subject of a TV drama in Korea before, despite common knowledge that Koreans, on average, work under much more rigorous conditions than many other countries.

According to the Organization for Economic Cooperation and Development, Koreans work an average of 2,124 hours a year, the second-longest hours among OECD nations.

Tough military-style hierarchies in recruiting and everyday work environments have been well documented and adapted for popular culture in TV dramas like tvN’s 2014 hit “Misaeng.” Yet the illegality of these practices, often taken for granted in the Korean workplace, has always been glossed over as irrelevant to the way things actually work.

It is this sensitive subject of legal integrity in the workplace that stands at the center of “Songgot-Piercer,” directed by Kim Seok-yoon, which premiered on JTBC on Oct. 24. 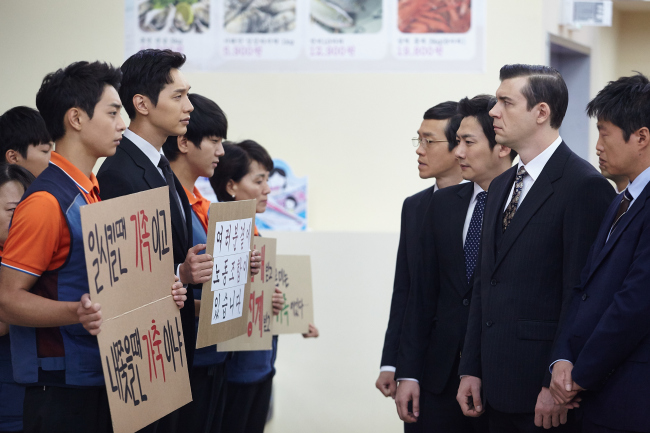 Still from "Songgot-Piercer" (JTBC)
Adapted from the eponymous webtoon by Choi Gyu-seok that first ran in 2013, the TV drama features a man named Lee Su-in (Ji Hyun-woo) who finds himself continuously beaten down in work, school and the military because of his determination to do things by the book.

Thinking that Korean organizational philosophy was the problem, he finds a job and rises to become a mid-level manager at a French-owned supermarket chain called Fourmis. All is well until he is ordered one day by a French superior to get rid of the store’s frontline employees using “any means necessary” -- meaning that he was expected to bully his team until they left on their own, reducing the company’s potential severance costs.

Trying to find a way to save his team’s jobs, Su-in teams up with a labor attorney named Koo Go-sin (Ahn Nae-sang), who offers counseling for people who have been illegally fired or treated unfairly in the workplace. Although Su-in is technically the protagonist of the drama, Go-sin has become an icon to the show’s fans thanks to his no-nonsense attitude and his unidealistic approach to the injustices in Korean workplaces today.

The characters Su-in and Go-sin, which have been praised by fans for their faithfulness to the webtoon’s original characters, set “Songgot-Piercer” apart from other dramas by creating a believable story untainted by didactic ideology.

By choosing mediating characters in typical labor fights as the central figures rather than focusing on frontline workers or high-level corporate power players, the drama is able to take a step back from emotional and extreme portrayals of “good” and “evil” sides.

“The landscape is different from the other side,” says Go-sin, making the point that corporations ignore labor laws out of self-interest rather than inherent evil. But, he also says, “you never know where the limit is if you don‘t fight.”

Coupled with intermittent informational scenes in which Go-sin gives open lectures or consultations about labor law, the drama’s dialogue make it clear that it will not feed into the politically charged victim complex that usually frames labor conflicts in mass media.

“Respect for people begins with fear. A living person gets angry when something is taken away, and fights back when they’ve been hit,” Go-sin says to laborers who are hesitant to join unions or take legal action for fear of retribution.

The title of the series is a metaphor for people who take action. If you shake hard enough, there’s always “one person, like an awl, who pierces through,” the drama says.

The 12-episode series “Songgot-Piercer” airs every Saturday and Sunday at 9:40 p.m. on JTBC.