“The foreign ministry appears to be tired of the strained relations,” New Politics Alliance for Democracy Rep. Shim Jae-kwon told The Korea Herald in a recent interview. “They think that putting up something that will gain public attention, like a remembrance day, will continue that kind of strained relationship.”

The Foreign Ministry, however, expressed its concern over the bill, saying that the international body had too many memorial days and countries with victims have different positions over Japan’s sexual enslavement. 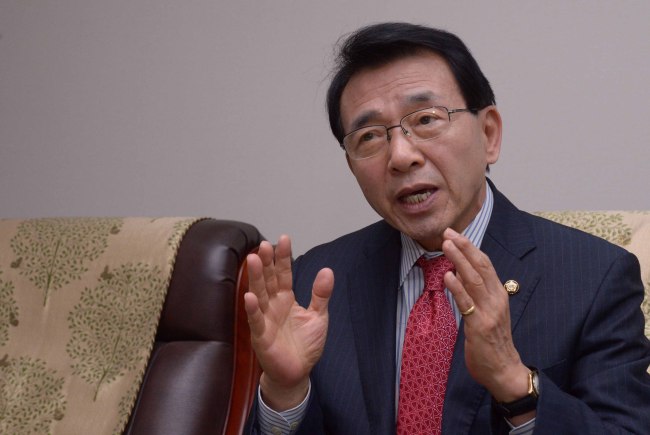 New Politics Alliance for Democracy Rep. Shim Jae-kwon. (Chung Hee-cho/The Korea Herald)
The term “comfort women” refers to the thousands of Asian, and some Dutch, females forced into sexual slavery by Imperial Japan in the 1930s and ‘40s. Most came from Korea and China, but there were others from the Philippines, Vietnam and elsewhere in Asia, historians have said.

The issue has gained increasing attention in Korea due to Japanese Prime Minister Shinzo Abe’s comments hinting that senior Tokyo officials still deny that women were forced into sexual slavery.

Abe’s failure to issue an explicit apology for the issue on his trip to Washington in April also reinforced such beliefs here.

The foreign ministry objects to the move as calls to set up a comfort women’s remembrance day could risk alienating key U.N. members already fatigued by the issue, according to Shim.

“The foreign ministry said there are already some 120 U.N.-designated anniversaries. And it said it was already difficult to organize cooperation among other comfort women victims’ countries.”

Those are ridiculous reasons not to pursue a comfort women remembrance day, Shim said.

“(A U.N.-backed comfort women remembrance day) is something that has a high possibility of being established, and something that could clearly express our government’s stance on the issue,” he added.

The second-term lawmaker added that key disagreements between his liberal party and the conservative Saenuri Party over a North Korea human rights bill persisted. Close to 20 versions of the bill have stalled in Seoul’s unicameral parliament since 2005 due to partisan disagreements.

“Let me make this clear: Our party does not oppose a North Korea human rights bill. Nor are we hesitant about writing one,” he said.

“But it is our stance that the human rights bill must be a practical one ― something that genuinely enhances rights in the North, not something that worsens tensions.”

The Saenuri Party and Shim’s NPAD are at loggerheads over three points, Shim said.

The NPAD says the human rights bill must not be misused as a source of funds for potentially provocative activities such as the sending of anti-Kim Jong-un leaflets by activists from the South to the North.

The Saenuri Party says the leaflets should be protected under the freedom of expression clause in the Constitution.

The two parties are also at odds over which government bureau should be in charge of the human rights bill.

The NPAD supports putting the Unification Ministry, Seoul’s main North Korea policy bureau, in charge. The Saenuri Party backs a plan dividing the many functions of the bill among multiple government organizations.

The NPAD and the Saenuri Party also disagree over the use of a human rights records office to be established by the North Korea human rights bill, Shim said.

The main opposition says that the records office must be put under the Unification Ministry and primarily used as an information source for policymakers.

The Saenuri Party says it should be put under the Justice Ministry, and used to prosecute North Korean violators of human rights after unification. The office could also deter North Korea officials from committing more crimes, Saenuri officials have said.

“I am not against penalizing North Korean officials who have violated human rights,” Shim said. “But I believe that such a role must come second to information gathering for policymaking.”

“And you must remember that North Korea’s human rights issue cannot be approached purely from a humanitarian, or a philosophical point of view,” Shim said.

The human rights predicament there has political ramifications in inter-Korean relations, Shim said. That makes it different from the civil rights issue in the U.S. or the aborigines’ plight in Australia, the lawmaker added.

The main opposition lawmaker also expressed his opposition to possible U.S. plans to deploy a Terminal High Altitude Area Defense battery in Korea, even if Washington decides to fund the deployment on its own.

“I am not opposed to placing (THAAD) in Korea if it can block North Korean missiles. But I think THAAD is the wrong answer to intercepting North Korea weapons.

“And the diplomatic cost of bringing the system here outweighs the system’s defense capabilities,” the lawmaker added, noting China and Russia’s opposition to the deployment of THAAD here.

THAAD is a missile system designed to intercept incoming missiles at altitudes between 40 and 150 kilometers. U.S. officials have raised the possibility of placing the system here, although South Korean officials assert there has been no request to do so from Washington.

Shim, 68, is a second-term lawmaker representing the Gangdong-gu district in eastern Seoul. The lawmaker is a former aide to the late President Kim Dae-jung. He holds a doctorate in international politics from Australia’s Monash University.