“‘Cavalia’ is not a circus. It’s not a horse show. It is a show about horses and the bond between horses and human,” he said in an interview with The Korea Herald inside one of the tents that make up the White Big Top, a makeshift structure specially designed for the Canadian touring production.

“The horses are not forced to do this. There is a genuine bond between horses and riders (in my show),” he added. 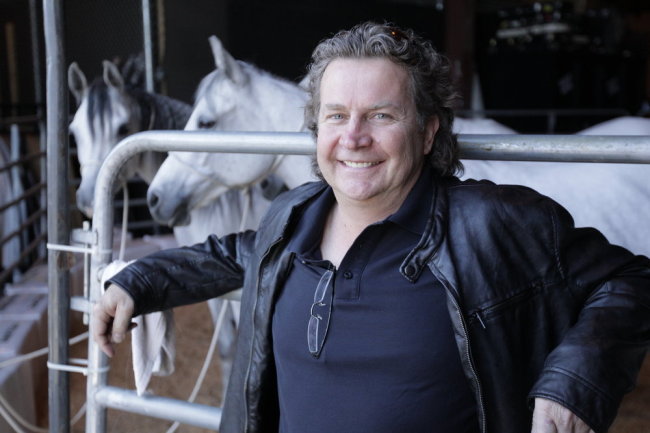 Normand Latourelle, producer and creator of “Cavalia” (Cavalia)
The Canadian was one of the creative brains behind the famed Cirque du Soleil in the late 1980s, so staging big, bold theatrical spectacles was his specialty. But horses were not.

The idea of making a show with horses started from a small moment nearly two decades ago.

He saw a performance in which there was an extra horse on stage and was intrigued by how the horse stole the show by just standing in one corner.

“The audience was looking at the horse, not the performance,” he recalled. “That’s when I started to think about creating a show with horses.”

After nearly a decade of preparation, “Cavalia” premiered in 2003 and has since enthralled over 4 million spectators around the world.

Often described as a “show unlike any other,” it mixes horse riding, acrobatics, multimedia and special effects to deliver a magical experience to the audience.

“I want (my show) to offer the audience a real entry into a dream,” he said.

Asked about the most difficult part of putting together Cavalia, Latourelle answered: “Time. The amount of time that is required to build a show with horses.

“We don’t push them. We have to go at their speed,” he added. “Now, we’ve adapted ourselves to them and we try to make them feel happy when they come on the stage.”

Every rider in the show spends a lot of time with her horse, he explained. This is not just for training, but to build a bond.

Preparing for this Asian tour, the producer was curious about how people from distinctively different cultural backgrounds and with different personal attitudes toward horses would respond to his show.

Now he feels confident that “Cavalia” has a universal appeal.

“I understand that the audience here may have no idea what to expect. But once they come to see it, they will enjoy it, because it’s just so beautiful and fun to watch,” he said.

Before Seoul, “Cavalia” stopped at Singapore and had great success there. “After Seoul, we will be moving to Taipei and then Hong Kong. We wish to stay in Asia for a while,” he said.