This is why Lee Kwang-hyung, head of KAIST’s Graduate School of Future Strategy, called for the development of new scientific and technological skills to enable the next generation to think creatively by converging their knowledge in various fields.

Through such “convergent thinking,” people and businesses can better picture the future as it becomes more complex and sophisticated, he said.

“The future is created through various factors that have interacted in sequence. We need to use and analyze data to research and make predictions about the future, which has yet to occur,” Lee told The Korea Herald.

Technologies, ranging from cloud computing to bioengineering, converged with arts and socioeconomics will boost humans’ capacity to manage the future, and embrace a new era in which every object will be connected to the Internet.

These technologies with human resources capable of applying their knowledge in science and the arts are more than necessary in South Korea amid economic constraints due to the low birthrate, growing inequality and geopolitical risks in Northeast Asia.

“Science and technology have become a more important (discipline) in helping to predict and change the future than other fields such as politics, economics and the environment.” 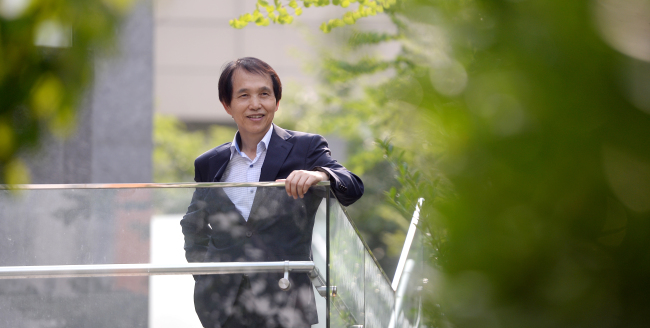 Lee Kwang-hyung (Ahn Hoon/The Korea Herald)
“For instance, technologies such as the Internet and mobile phones have rapidly changed the way we live and how we do business over the last 20 years, whereas (Korea’s) politics, economy and environment have basically remained the same.”

A country’s economic growth is a direct result of its development and application of science and technology, Lee noted in the book “Thinking of the Future: 2013 Plus 5,” which he cowrote with other KAIST professors.

Lee, also the chair professor of KAIST’s Department of Bio and Brain Engineering, said that Koreans must practice thinking outside the box in order to develop new technologies and boost productivity for growth.

Lee’s “3-D” creative thinking methods allow people and businesses to plan and forecast in terms of time, space and field by using and converging information and analyzing data to search for patterns.

For instance, they should identify specific business or technology fields of interest such as shale gas or mobile phones, and ask what will happen in 10, 20 or 30 years not only in Korea but also elsewhere such as the U.S., China and Europe by addressing a variety of socioeconomic problems and issues.

“The three axes (of time, space and field) can help us to see objects or matters beyond the present, and visualize the future,” Lee said.

Those who resist change and forward thinking will be left behind in the competition, unable to explore or venture into new possibilities.

Fujifilm, for example, succeeded as it effectively looked ahead amid the emergence of digital cameras. The Japanese company adopted its technology into other areas such as medical imaging solutions and display film materials for LCD TVs.

However, Fujifilm’s competitor Kodak, which once dominated the film market, failed to recognize the importance of digital, and stuck to its analog imaging business, Lee noted.

Lee wrote in his book “Three Dimensional Creativity” that businesses that ranked at the top but failed to prepare for the future and instead remained in their comfort zones, known as the No. 1 syndrome, faced grave consequences. Like Kodak, Sony, the champion of analog consumer products, fell behind as it failed to see the potential of digital electronics.

The professor of futures studies said that one does not have to be gifted to think creatively. However, it takes a lot of practice and effort to develop one’s creative ability.

“We can increase our creativity through education by asking a lot of questions and having a lot of discussions,” Lee said.

“For instance, the Jewish, who account for more than 20 percent of all Nobel Prize Award recipients, encourage (their children) to ask and discuss a lot both at homes and schools.”

Korea, which faces growing uncertainty, needs to develop such an environment at homes and schools to boost creative or 3-D thinking, which is necessary for planning for the future, he said.

“In order to become a creative economy, Korea must first develop an education environment that encourages kids to ask questions,” Lee said.

“And we must praise them whenever they ask, so that they can keep asking questions, which will help build their creativity.”

This would help Korea implement long-term growth strategies different from other countries.

Lee said that Korea already has a market that is open to other cultures, languages, technologies and laws, and the key to staying “different” is being able to implement policies that have been devised from converging knowledge in a variety of fields.

“Korea can further gain an advantage through ‘convergent policies’ as the country adopts global standards in various fields (such as patent systems and technologies),” Lee said.

“(We must prepare) as we will soon experience another Internet revolution with the Internet of Things.”

Lee Kwang-hyung graduated from Seoul National University with a degree in industrial engineering in 1978, and got his master’s at KAIST in 1980. He then acquired a Ph.D. in computer science at INSA de Lyon in France in 1985.

He currently serves as a professor at KAIST’s Department of Bio and Brain Engineering and heads its Graduate School of Future Strategy. His research areas include bioinformatics and artificial intelligence, and he has written some 120 academic papers for international journals. He also led a number of his students to start businesses, including Nexon, Korea’s online game developer, and Idis, a network security camera maker.