“Why is it that (there have been) three meetings and no casting?” Chinese actress Lin Xi Ya posted on Weibo, the Chinese version of Twitter, together with a photo of Kris.

According to the news report, a source who came forward with Lin’s currently deleted SNS post claimed that “Lin Xi Ya is a person who has dated Kris and is still a close friend of his.” 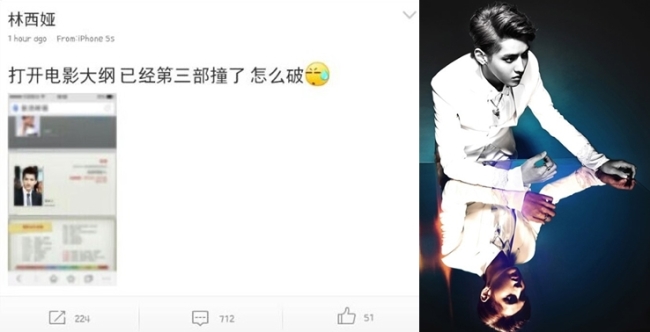 (Weibo / SM Entertainment)
It is unclear whether the castings that Lin mentioned took place while Kris was under contract with SM Entertainment, EXO’s management company, or after he filed a lawsuit against it. But the news agency surmised, based on Lin’s claims about Kris’ failed attempts to find a breakthrough in China, that he is having a trouble debuting as a solo artist.

Kris filed a lawsuit on May 15 against his management agency to nullify his contract and returned to China. Since his suit, Kris has been rumored to have been contacted by several management companies and film industry players but his next step remains uncertain.