[ The Korea Herald – Send E-mail ]
By-elections to sway Sewol probe
Parties set for fierce battles for at least 12 vacant Assembly seats
By Korea Herald
Published : Jun 8, 2014 - 21:22
Updated : Jun 8, 2014 - 21:22
With at least 12 parliamentary seats on the line, the July by-elections are expected to influence parliament’s Sewol investigation committee, despite promises by ruling and opposition lawmakers to avoid party politics during the panel’s probe into the maritime disaster.

“Both the ruling and opposition parties have agreed to avoid political bickering with regards to parliament’s Sewol investigations,” Rep. Cho Won-jin of the ruling Saenuri Party said at a press briefing on Sunday, as opposition lawmaker Rep. Kim Hyun-mee nodded at Cho’s side to show her agreement.

But the panel’s two senior lawmakers were still divided over whom to select as key witnesses and whether to hold the witness hearings before the July by-elections.

The Saenuri Party has been reluctant to hold witness hearings near or around the elections on July 30 and to make them public as the opposition could snatch a majority in parliament by winning in the polls. There are fears the government’s bungled rescue efforts last month could adversely affect the by-elections for the ruling party.

Endorsement ratings for the Saenuri Party has been above 40 percent nevertheless, according to a Gallup Korea report from late May. The NPAD’s stood at 28 in the same Gallup survey.

The main opposition New Politics Alliance for Democracy on the other hand has been relatively eager to hold current and former Cabinet members as committee witnesses and to proceed with parliamentary hearings on dates near the elections.

The NPAD says key witnesses such as Kim Ki-choon, President Park Geun-hye’s chief of staff, should be called in as witnesses right away. Ruling party lawmakers say specific witnesses should be selected after hearing reports about the Sewol accident from related government agencies. 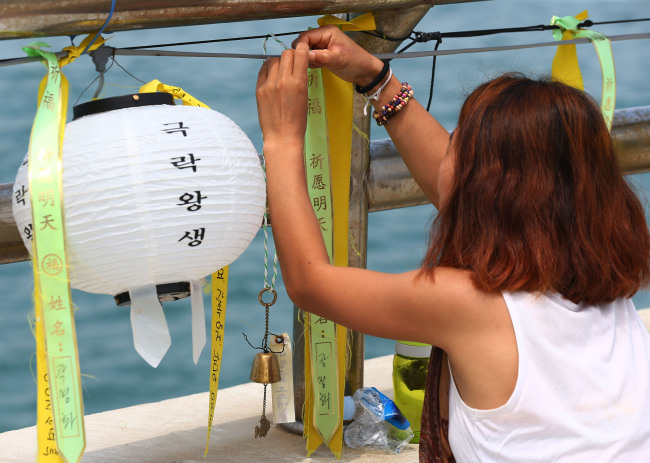 A woman hangs a wind chime Sunday at Paengmok port on Jindo Island to commemorate victims of the Sewol sinking which included teachs and students from a high school in Ansan. The tragic accident on April 16 left 304 of its 476 passengers dead or missing. (Yonhap)
The Sewol committee agreed on smaller details.

The panel will send Reps. Kim Myung-yeon of the Saenuri Party and Boo Jwa-hyun of the NPAD to Jindo Island as parliament’s liaisons for the families of those still missing. Legislators will also set up plans to provide financial and general support to the victims’ families and merchants in Jindo Island and Ansan, Gyeonggi Province.

If the NPAD wins key districts at the polls next month in Seoul, Busan, and in Suwon, Gyeonggi Province, the opposition could outnumber their rivals in parliament, strengthening political opposition against President Park. She has already suffered a drop in approval ratings since the Sewol disaster, from 61 percent to 47, according to Gallup Korea.

Speculation that the rival parties could nominate political heavyweights such as the NPAD’s Sohn Hak-kyu, a former presidential candidate and Gyeonggi Province governor, and the Saenuri Party’s Kim Moon-soo, the current Gyeonggi governor and another former presidential hopeful, adds weight to the elections, according to experts.

“(The lawmakers) are going to take time,” sighed one family member, while Yoo Gyoung-geun, who lost a daughter in the Sewol sinking said, “We will keep our eyes open.”