The June 4 local elections were seen as a referendum on her government, which has been sharply criticized for its poor handling of the Sewol ferry disaster on April 16 that left more than 300 dead or missing.

With deepening voter apathy in the wake of the ferry debacle, the elections were expected to deal a serious blow to the president and weaken her leadership in leading reform policies.

The issue of public safety dominated campaigns, while pledges on education, jobs and the economy were put on the back burner. The main opposition party called for judgment on the Park administration while the ruling Saenuri Party begged voters to give the president a second chance.

The ruling party prevailed in mayoral races in Daegu and Ulsan, and gubernatorial races in Jeju Island and its strongholds in South Gyeongsang and North Gyeongsang provinces, according to early results released as of 11:30 p.m. The main opposition New Politics Alliance for Democracy was widely expected to achieve victories in mayoral races in Seoul, Sejong and Gwangju, as well as gubernatorial races in its traditional power bases ― the South and North Jeolla provinces.

The rival parties locked in too-close-to-call races in Busan, Incheon and Gyeonggi Province, key battlegrounds that were expected to determine victory in the elections. Park Won-soon of the NPAD was expected to be re-elected as mayor of Seoul by defeating Chung Mong-joon, a seven-term lawmaker of the ruling party. 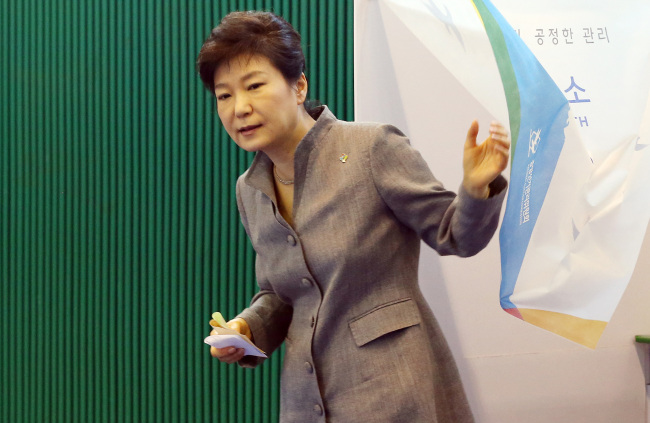 President Park Geun-hye leaves a polling booth after casting ballots for local elections at a school near Cheong Wa Dae on Wednesday morning. (Park Hyun-koo/The Korea Herald)
The elections were the first nationwide polls since Park took office in 2013.

They are forecast to serve as a turning point for the Park administration, as she plans to carry out a major Cabinet reshuffle soon, starting with the nomination of a new prime minister and other key posts.

The president vowed to bring drastic changes to her administration by launching new ministries to improve the country’s safety standards and work efficiency. The president said she would crack down on suspicious business ties between government officials and businesses, seen as a major cause of the Sewol disaster.

Despite the reform measures and repeated apologies, Park has been struggling to bolster her position in the aftermath of the disaster. Park has found herself at the center of criticism since the disaster as she has been viewed as insensitive to the grieving victims’ families.

Her official apology came more than a month after the tragic accident, while a series of reform measures were announced weeks before her tearful address. The president’s failure to embrace the grieving nation became the catalyst for the rapid loss of public confidence in her and her party, observers said.

Earlier, both Cheong Wa Dae and the ruling Saenuri Party had been confident about the local elections as Park had enjoyed a high approval rating. Her approval rating surpassed 60 percent in early April. But the rating declined rapidly to just below 50 percent after the accident ― and there were no signs of it improving.

Some observers had raised concerns that if the Saenuri was defeated, the election results could possibly put Park into early lame-duck status and trigger a power shift in the ruling party. Park’s term ends in early 2018.

The embattled president has been facing another tricky challenge of finding a suitable candidate for prime minister, raising worries over a further delay in her state reform drive.

Park nominated Ahn Dae-hee, a former star prosecutor, as new prime minister last month. But he withdrew himself from nomination last week amid spiraling controversy over his high income and accusations that he received special favors. The nomination of Ahn, who led investigations into high-profile graft cases signified Park’s determination to fight corruption and regain public trust in her government.

But with Ahn stepping down from the nomination, Park is back at square one in her effort to find a figure to represent her drive to root out corruption in public offices.

“Park failed to resolve the Sewol crisis. Her communication was lacking and her improper nomination of a prime minister has also jeopardized her reform efforts,” said Yang Seung-ham, a political science professor at Yonsei University.

Park is expected to pick one of her aides in her party or a well-reputed person who has no ties to power, politics and government to assure the public that the nominee has no ethical lapses.

The president is widely expected not only to replace the new prime minister but her aides in Cheong Wa Dae as well, including chief of staff Kim Ki-choon. Kim, a long-time aide of Park, has been criticized for exercising too much power behind the scenes and making a series of unsuccessful and unbalanced nominations, relying heavily on his networks of prosecutors and judges. Kim, former justice minister, is the head of the presidential committee for personnel affairs.

Political commentators say the election results will force her to change her management style as well. The president has been under pressure to give greater authority to the prime minister and other ministers to increase efficiency and transparency in state affairs.