Starting with “Le Roi Soleil” next month, popular musicals such as “Marie Antoinette” and film-turned-musicals “Priscilla” and “Once” are lined up for Korean fans. 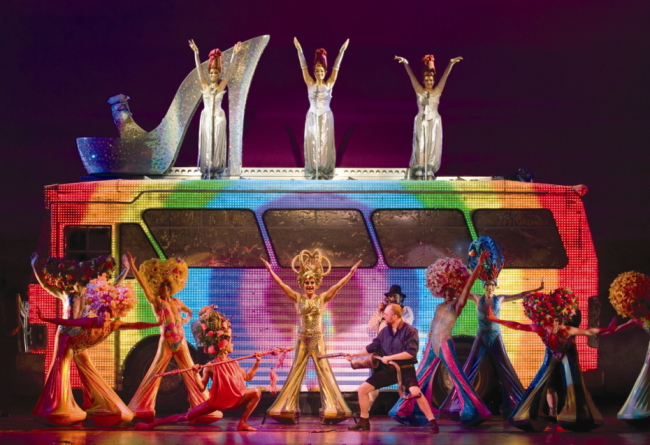 A scene from “Priscilla” (Seol and Company)
“Le Roi Soleil,” scheduled for Blue Square in April and May, will feature Shin Sung-rok, from the recently ended smash hit TV drama “My Love from the Star” as Louis XIV. The audience will not only be amused by the story of the king’s life but also by the gorgeous costumes of 17th century France, a grandiose orchestra and florid acrobatics. Since it premiered in France in 2006, more than 170,000 have viewed it in more than 400 runs across Europe, including Belgium and Switzerland.

Another European musical to note is “Marie Antoinette,” to be performed from October to February 2015 at Charlotte Theater. Its score was composed by Sylvester Levay with lyrics written by Michael Kunze, who also authored “Elisabeth,” “Mozart!” and “Rebecca.” “Marie Antoinette” is based on the tale of the queen’s fate during the French Revolution. The story unfolds with an encounter between the French queen and a poor girl named Margrid Arnaud ― two characters who have many things in common, including their age.

From left: Posters for “Le Roi Soleil”, “Marie Antoinette”, “Cats” (EMK Musical Company)
The musical had a sensational debut in Tokyo in 2006, attracting 250,000 viewers. After the tremendous success, it was staged in two German cities ― Bremen in 2009 and Tecklenburg in 2012.

The musical version of the movie “Priscilla: Queen of the Desert” will be staged with a Korean cast from mid-July at LG Arts Center. The award-winning musical, on its first run in Korea, is expected to please the eyes of spectators with flamboyant costumes and the ears with familiar pop songs including “It’s Raining Men” and “I Will Survive.” The story is about two drag queens and a transsexual who perform in a drag show at a resort.

The musical adaptation of the 2006 hit film “Once” will take to the stage from December to March 2015 at Seoul Arts Center. The musical won eight Tony Awards in 2012, including Best Musical and Best Actor.

“Ghost,” which has been running since November 2013, will continue until June this year at D Cube Art Center. It has grabbed attention with its star-studded cast, which includes, TV actor Joo Won and pop-singer Ivy. The musical has attracted attention with a high-tech stage set using multimedia and LED lighting.

The hottest musical since last year, “Wicked,” is going on an open-ended run this year. Starting last year with the first Korean-language version, it has drawn more than 100,000 spectators. It stars musical actress Oak Ju-hyun as the green-skinned witch Elphaba.

The original cast of the musical “Cats” will arrive in Seoul in June. The original-cast musical will be revived in Korea six years after it was first shown here.

Popular local musicals will be running again as well.

The musical adaptation of the best-selling “Please Look After Mom” will start another run June at Seoul Arts Center. Another Korean musical on the 1980 democratic uprising in Gwangju, “On a Fine Day,” will have another run from April 26 to June 8 at Namsan Arts Center.