BMW, Kia, as well as yet-to-be-introduced French brand Mia have all set their eyes on the “global test bed.”

The biggest attraction of Jejudo Island among electric vehicle companies is the state support.

The Jeju Special Self-Governing Province is giving 8 million won in local support for an electric vehicle purchase. The central government ― through the Ministry of Environment ― is granting a further 15 million won.

The reason for the generous grant is the administration’s zeal to become a carbon-free island by 2030. It hopes to gain World Environment Hub accreditation from the International Union for Conservation of Nature.

As part of the ambitious plan, the government is planning to have all vehicles on the island switched to electric vehicles. Currently, there are only 360 with 1,870 in the whole country, mostly used in the public sector.

Such efforts and plans have been well received by residents. Last year, when Jejudo provided subsidies for a total of 160 cars, there were three applicants for every subsidy allocation. With the first International Electric Vehicle Expo held this month on the island, competition may become even hotter for this year’s quota of 500, insiders say. 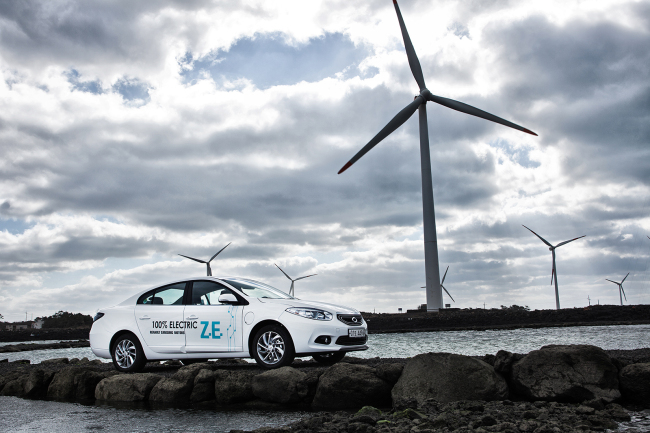 Jejudo is small, but has everything.

There are many oreum ― or small, volcanic hills ― which provide the best environment for testing atmospheric pressure. The weather is volatile; the island is famous for having sunny, windy, rainy, snowy and foggy weather all in the same day. This makes climate tests easier, Jeju officials say.

The local government is pushing the smart grid as a landmark business. A smart grid is a progressive grid system that manages electricity demand in a sustainable and economic manner with advanced infrastructure.

Pilot programs are running that establish smart grids at home, where solar power or various renewable energy sources are used within the house and can charge EVs. The program is scheduled to be adapted for commercial services by 2016.

With such facilities at home, recharging EV batteries is much easier in Jejudo than other parts of the country. Moreover, there are already 449 slow-charging kiosks as well as 48 fast-charging stations on the island. More so, major tourist attractions, public organizations, shopping centers and other locations are equipped with charging facilities. The faster charger takes about 30 minutes, which means a car could fully charge while a person is shopping, eating or getting their hair cut.

The local government is pushing several driving rallies for EVs. Drivers can travel across the island and enjoy the ocean view in less than 200 kilometers. Taking into account that electric vehicles can run an average of 100 kilometers per battery charge, the island is just the right size for EVs, observers say.

SK Speedmate, a rental car provider, has started leasing EVs to mainly tourists at a bargain of 17,500 won a day since early this year. Though the business is still in a budding stage, attracting about 10 users a week, SK said the customer satisfaction was high, with 8 out of 10 expressing a willingness to rent EVs in the future.

The French carmaker Mia Electric has recently set up its Korean unit with the aim of starting car sales from as early as next year and its test bed is reportedly Jejudo. The affordable vehicle manufacturer is expected to enjoy the government subsidies and full support infrastructure.

Much rumored EV maker Tesla is likely to embark into the Korean market starting in Jejudo, making its way up to Seoul, industry watchers say.

“We get information requests from all around the world. It seems like carmakers are certain that success in Jejudo will open the door for success in Korea,” said Kim Young-a, a Jejudo official.