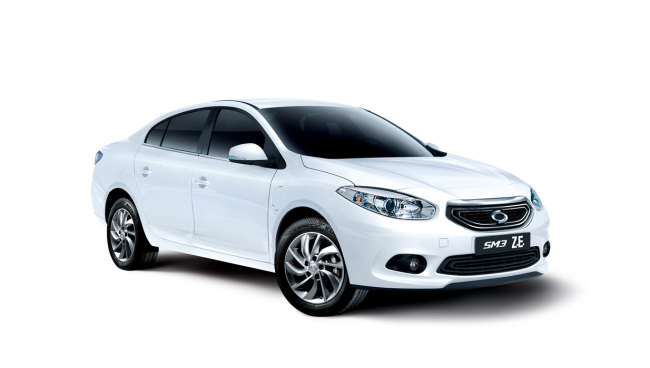 SM3 Z.E.
Renault Samsung Motors’ endeavors to go electric appear to be paying off. The company now expects to sell more than 4,000 units of its representative electric car, the SM3 Z.E., this year.

“Electric cars will be the engines of growth leading the green growth of Korea,” said Francois Provost, chief executive of the company at the announcement of its EV production in October 2013.

According to the carmaker, a total of 453 units of the nation’s first full-electric subcompact car left showrooms in 2013, after its launch in November. The figure accounts for some 58 percent of the total 780 electric vehicles sold last year and the SM3 Z.E. became the most sold EV of the year.

“With the government encouraging electronic vehicles in every way possible, the SM3 Z.E. is expected to draw more attention from auto fans and environmentally conscious people,” an auto industry insider said.

The Ministry of Environment provides 15 million won to EV buyers and local administrations are also chipping in to encourage EV purchases.

And because the SM3 Z.E. is a subcompact that is affordable, comfortable and high-performing, it is widely expected to lead the market and mold a new driving trend, according to industry watchers.

The growing public awareness of energy-efficient transportation ― the fuel efficiency of SM3 Z.E. is six times higher than gasoline engines of the same specifications ― is another factor contributing to Renault’s sales here.

The car’s 22-kWh lithium-ion battery is guaranteed to retain 75 percent of its capacity, which allows the firm to offer a warranty lasting five years or 100,000 kilometers. Renault Samsung is the first company to provide such a strong warranty program for an EV.

Its regenerative braking system collects and converts kinetic energy to electrical energy when the vehicle slows down to either use immediately or store until needed.

The patented Chameleon charging system allows users to take advantage of both fast and slow chargers with a single charging inlet. Slow chargers take up to 3-4 hours, but fast chargers can recharge up to 80 percent of the car’s full capacity in half an hour.

For taxi drivers who can’t afford to wait too long, an immediate battery exchange system has been put in place.

Further, as a safety precaution, the SM3 Z.E. features a Z.E. Voice program, which creates a virtual engine sound so that pedestrians on the street can notice a car approaching.

Even before the release, the carmaker received more than 500 preorders. LG Chem became the first corporate customer and received the car in November 2013.

Electric taxis are scheduled to be adopted on Jejudo Island and in Daejeon, while EV-sharing programs are in the last stages before hitting the streets of Seoul.