“Lately, I’ve been spending the majority of my weekends watching movies and dramas that are set in the 1990s,” said Rho. “Although I can relate to some things from when I was growing up, there are a lot more things that I can’t recall, probably because I was too young.”

Rho is one of many people in Korea who are currently immersed in “retro fever.”

The craze over retro products and culture that has been spreading throughout the country shows no signs of slowing down in 2014.

One sector that has seen a great impact from this developing trend is the food business.

There is a visible increase in the number of restaurants, cafes and bars that have adopted retro-style interiors and play retro music for their customers. 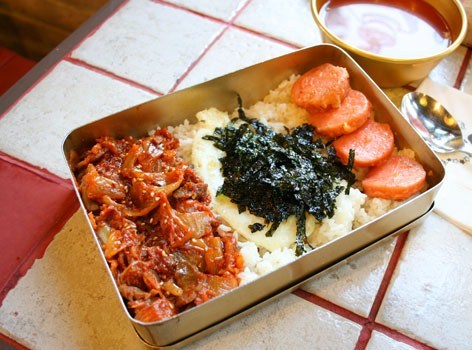 Miss Lee Cafe is one establishment that has flourished thanks to the retro craze. 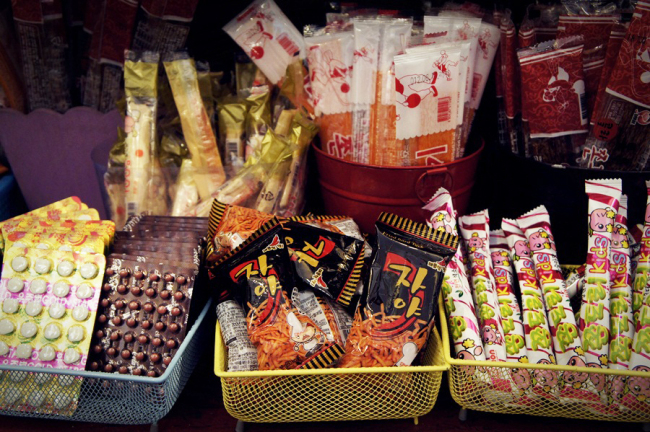 A collection of junk foods that were popular in Korea during the 1980s and 1990s (Miss Lee Cafe)
“As a special event, we also offer bbopkki (a traditional Korean candy made of caramelized sugar and baking soda) and provide a selection of classic junk foods that customers may purchase,” said Rhim Tae-joon of Miss Lee Cafe’s marketing team.

Items and accessories that are hard to find today decorate the shop to complete the retro mood.

The cafe mainly attributes its success to having found a good balance between retro and modern qualities.

“We’re not just about old ideas but about reinterpreting something that is retro to satisfy the newer generation,” said Rhim.

“I think our customers appreciate that our cafe is amusing and entertaining,” he added.

The retro fever has also reached the fashion industry.

The consumer demand for retro fashion items has risen sharply in the past few years, according to industry sources.

The old-fashioned duffle coat, also known as the “tteokbokki” coat in Korea, jean jackets and canvas shoes have all reentered the scene amid growing demand.

“Following the recent cable television drama ‘Answer Me 1997’ and ‘Answer Me 1994,’ ’90s fashion has been gaining momentum since 2013,” said Yang Im, chief of youth fashion for Lotte Department Store.

Not only are fashion brands beginning to supply more retro-style clothes, but older clothing companies are being revived as well, Yang explained.

According to Yang, casual street wear such as punk and hip-hop as well as snapback hats and baseball jumpers have all seen an increase in sales volume.

“Production of retro apparel has doubled for many companies and the department store has seen an average increase in sales of roughly 20 percent (for retro clothing) from last year,” said Yang.

Several online shopping sites have also enjoyed double-digit growth in sales as they can easily group their retro items and utilize their platforms to make shopping more convenient for the customers.

Meanwhile, the music industry is no exception to the retro boom with more people seeking out albums of older musicians such as the late Kim Kwang-seok or the late Yoo Jae-ha.

Both artists were smash hit singer-songwriters in the ’80s and ’90s.

Some record producers are even introducing remake albums due to their wide popularity.

“Because more customers, especially middle-aged men and women, come into the store looking to purchase the albums of older-generation artists, some of these old albums have even made the bestseller and steady-seller shelves,” said Kim Tae-young, head of the music section at the Yeongdeungpo branch of Kyobo Hottracks, the largest record store chain in Seoul.

“At one point during the retro boom, we saw up to a 50 percent increase in sales,” she said.