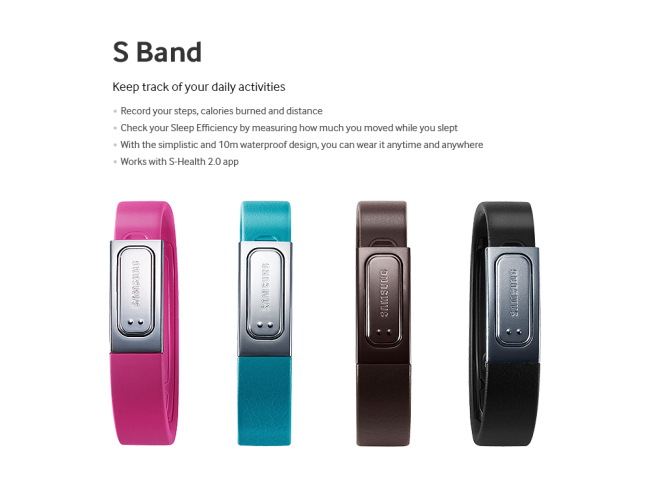 Images of Samsung’s Galaxy S Band, a health-related accessory for the Galaxy S4 smartphone
Samsung Electronics and LG Electronics, two of the world’s largest smartphone makers, are bracing for the era of wearable devices next year, with plans to unveil upgraded smartwatches and wristband-type gadgets.

Following news that the long-awaited Tizen smartphone will roll out at the Mobile World Congress in February next year, industry watchers now say the Galaxy Gear 2 and Galaxy Band also are likely to be released.

“Samsung is currently working on the Galaxy Gear 2, and the product will be surely released early next year,” said Lee Seung-woo, an analyst at IBK Securities.

Another source close to Samsung, speaking anonymously, noted that Samsung was working to bring the Galaxy Gear 2 into the spotlight at the MWC.

“It’s a high possibility,” he said.

This next generation of the Galaxy Gear is expected to sport a flexible organic light-emitting diode display.

Another device expected from Samsung for the MWC is the Galaxy Band, which is reportedly a health and fitness wristband with which can monitor physical conditions such as pulse and blood pressure.

Anxious not to be outdone, LG Electronics, Samsung’s local competitor, is also poised to roll out products at the MWC, namely the “G Arch” and “G Health.”

The G Arch is suspected to be a flexible screen smartwatch and the G Health will likely be a fitness bracelet, both of which can sync with LG smartphones, according to market sources.

“There is a high chance that LG Electronics will unveil the smartwatch at the MWC,” said IBK Securities analyst Lee.

LG has applied for patents for both smart gadgets at the Korean patent office.
LG has long been working on developing its own wearable devices including a watch phone that first appeared in 2009.

Meanwhile, the unveiling of the long-awaited Tizen OS smartphone from Samsung is set to take place a day before the opening of the mobile conference in Spain, according to the Tizen alliance, which sent out invitations Thursday.

Samsung Electronics, together with Intel, leads the alliance to develop the open source operating system.

A Samsung official declined to comment on the smartphone running on the Tizen operating system.

The MWC is an annual mobile event that will take place from Feb. 24-27 in Barcelona, Spain.