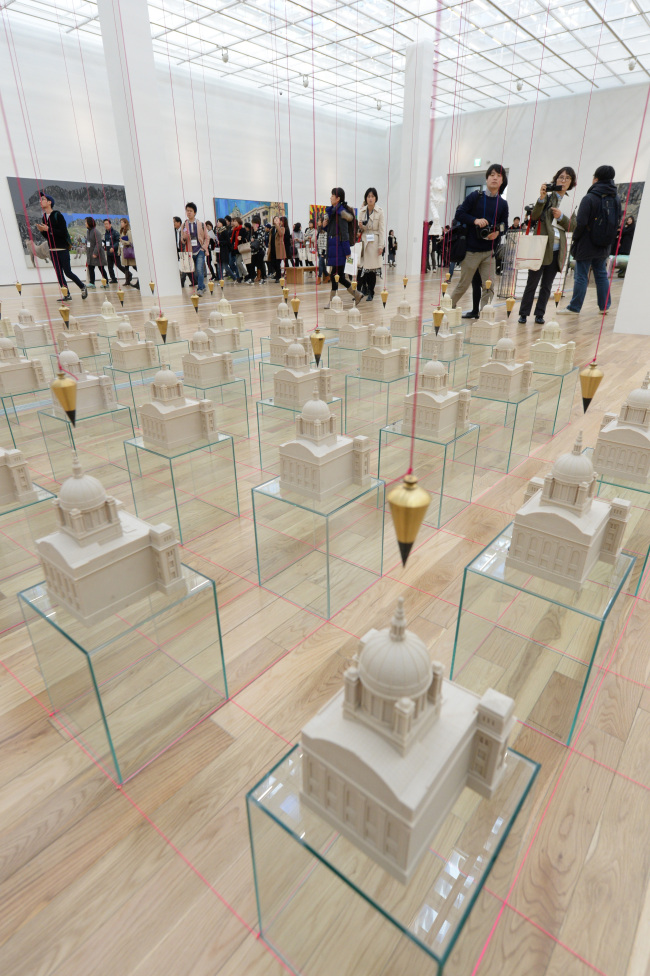 The museum, located in the heart of Seoul next to Gyeongbokgung Palace, is marking its opening in a big way, presenting five exhibitions that encompass diverse forms of contemporary art in exhibition spaces that measure a total of 10,450 square meters.

“The new museum has set its role as a comprehensive museum integrating the past, the present and the future; a central museum for Korean art that stimulates exchanges with the international art scene,” said Chung Hyung-min, director of the MMCA, at a press conference Monday.

The museum invited some of the most popular and emerging artists in the international art scene ― among them, Korean installation artist Suh Do Ho, Japanese artist Kishio Suga, who is behind the Japanese art movement Mono-ha, British media artist Tacita Dean, American artist Kim Jones known for antiwar artworks and shocking street performances, and emerging young artists such as Korean media artist Yang Min-ha.

Suh presents his new work from his “Home within Home” series in a vast space between exhibition halls called Seoul Plaza. The “Hanjin Shipping The Box Project” explores multiple layers of spaces in the museum that range from traditional to modern and contemporary buildings that used to be or are present in the museum space. 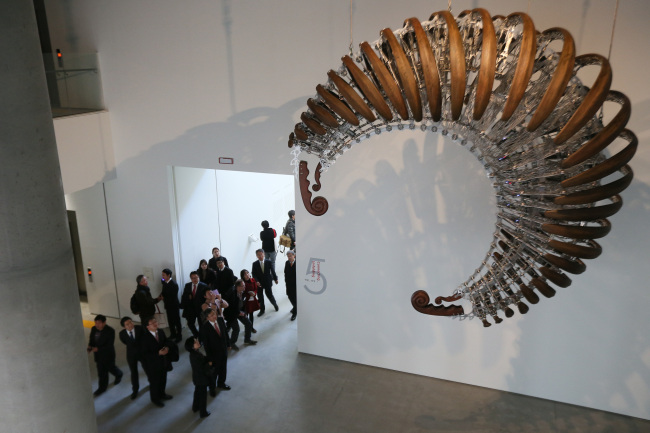 Visitors view “Opertus Lunula Umbra (Hidden Shadow of the Moon)” by installation artist Choe U-ram, part of the inaugural exhibitions at the Seoul branch of the National Museum of Modern and Contemporary Art, Korea, during a press preview Monday, ahead of the museum’s official opening Wednesday. (Yonhap News)
Another site-specific work by artist Choe U-ram offers an overwhelming sensation with a slow-moving animatronic structure called “Opertus Lunula Umbra” which hangs from the ceiling. The kinetic artwork is the latest version by Choe whose previous works have received acclaim at Liverpool Biennale in 2008 and other international exhibitions.

A group exhibition of seven international artists, “Connecting_Unfolding,” presents an overarching vision for the new museum that seeks to forge connections and cooperate with the international art world.

Interactive works of art invite viewers to deeply engage with some of the most experimental forms of contemporary art today. Taiwanese artist Lee Mingwei offers an emotional experience through a spontaneous performance “Sonic Blossom” in which an opera singer sings to a viewer upon request, and through a flower giving to a stranger in “The Moving Garden.”

Swiss artist Marc Lee presents real-time pictures of cities around the world in his “10,000 Moving Cities ― Same but Different.” As a viewer selects a region on a map, multiple cubic structures start to play real-time images and sound of the selected region.

The “Aleph Project” visualizes complex theories that represent complicated realities in some of the most innovative forms of art. Philip Beesley’s “Epiphyte Chamber,” creates a moving artificial botanical garden that reacts to touch on proximity censors, suggesting an extraterrestrial presence.

Some of the museum’s permanent collections will also be on view at an exhibition titled “Zeitgeist Korea,” which showcases paintings, installations and sculptures depicting Korean history.

A special section is allocated for photos that document the process of the museums construction that began in December 2011 and was completed in June this year.

Viewers are required to preregister online to view the inaugural exhibitions, which open on Wednesday. The museum will receive online registrations until the end of November to avoid a large influx of visitors.

In the month of November, the museum has extended hours on Wednesdays and Saturdays. Admission from 6 p.m. to 9 p.m. on those days is free. Regular admission costs 7,000 won. The museum also runs free shuttle buses between Gwacheon museum, Deoksugung Palace museum and the Seoul museum four times a day.