The remains of Goro Matsumoto, in his mid-20s at the time of his death, have never been recovered. Nor have those of 18,000 other Japanese soldiers who died on the island, now a tropical vacation spot for Japanese tourists.

“People sacrificed their lives to fight for the country. And their remains are left abandoned,” said Matsumoto, who is part of a voluntary program to repatriate fallen Japanese soldiers.

“Unless we return their bodies, we cannot bring closure to the war.”

Nearly seven decades after hostilities ended in 1945, Japan is still trying, with limited success, to collect remains in an effort seen as a symbolic gesture honoring those who paid the ultimate sacrifice.

Some 2.4 million Japanese soldiers died overseas during the war. Nearly half ― 1.13 million ― of them still lie in a vast area somewhere between Russia and remote southern Pacific islands. 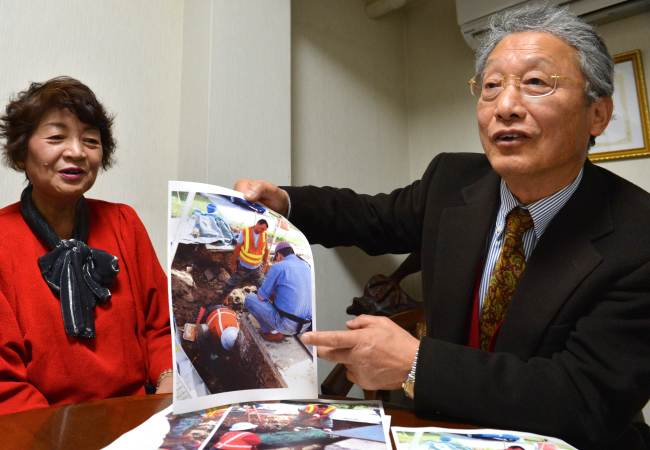 Japanese businessman Heitaro Matsumoto (right) and his colleague Sumiko Naito (left), volunteer to repatriate the remains of fallen Japanese soldiers, and showed images of their work during an interview in Tokyo on Feb. 5. (AFP-Yonhap News)
Japan’s efforts have required sensitivity. Memories of the bloody war remain vivid in East Asia, where the legacies of brutal colonialization and nationalistic tension continue to affect Tokyo’s ties with Beijing and Seoul.

It is also logistically difficult. For the first seven years after the war, Tokyo could not dispatch overseas missions because of the U.S.-led occupation.

The lack of diplomatic relations with Beijing until 1972 meant no one could go looking for the tens of thousands believed to have perished in what is now China.

Roughly 300,000 soldiers are estimated to have died on the oceans while being transported by ship and the jungles of Southeast Asia present their own challenges when it comes to locating the dead.

Politicians across party lines have passionately supported a program that collects several hundred to a few thousand remains every year, aided in part by sentimental movies depicting the pain of those left behind, unable to hold a proper funeral.

“The program is open-ended at this point,” said a welfare ministry official in charge of repatriation issues. “We are conducting the program as a national policy.”

In 2010 left-leaning then-Prime Minister Naoto Kan launched a three-year project to find remains on Iwoto island, better known as Iwojima, the site of one of bloodiest battles at the end of the war.

Kan boosted the annual budget to more than one billion yen a year for three years, a sharp increase from the normal budget of 200 to 300 million yen ($2.1 to $3.1 million).

“It is a national duty to collect remains of those who died for Japan,” Kan said at the time.

Skeptics say Japan should stop the costly program and give up on an almost impossible task.

But others say the country’s complicated relationship to its wartime history mean it is an important way to come to terms with the past.

Some of the men who governed Japan during its acquisitive march through Asia were convicted as war criminals in trials held by the U.S.-led occupying forces in the years following surrender.

As a defeated aggressor there is no nationally accepted version of events, or agreement on who was a hero in the years up to 1945, said Haruo Tohmatsu, professor at the National Defense Academy.

Tokyo, instead, focused its narrative on the building of a modern democracy and a U.S. ally in a new global order.

“You might say Japan was characterized as a sort of a criminal state that disturbed the world,” he said. “It has been difficult for Japan to openly honor people who fought in the war and died.

“Recovery of remains can be interpreted as a form of recognition” of the fallen soldiers without any judgement on the nation’s uncomfortable past, he said.

However, nearly 70 years on, the task risks becoming a practical impossibility.

“The places of their deaths should be regarded as their graves,’’ said Tohmatsu.

But for aging relatives in a culture that places great emphasis on family graves providing a home for departed souls, it is difficult to give up hope that some day the remains of their loved ones will return to the homeland.

Heitaro Matsumoto recalls how he watched the skeleton of one soldier ― still wearing boots and clutching a grenade ― unearthed at a site in Guam.

“We know the remains are there,’’ Matsumoto said. “We must do this so the memory of the horrific war will never fade.’’