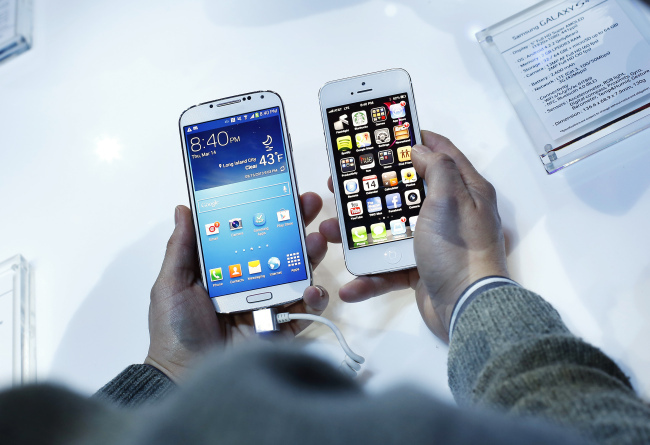 An attendee holds a Samsung Electronics Co. Galaxy S4 smartphone (left), next to Apple’s iPhone 5 during an event at Radio City Music Hall in New York in March. Samsung unveiled the Galaxy S4 with a bigger screen and software that tracks eye movements. (Bloomberg)
Koreans were found to be the most eager in the world to replace their mobile phones, according to data on Sunday.

Chile came second with 55.5 percent, followed by the United States with 55.2 percent and Uruguay with 53.6 percent, while Bangladesh ranked at the bottom with 8.4 percent.

Strategy Analytics forecast that the replacement figures complied for Korea will rise to 70 percent this year, although the number will gradually decline to 62.9 percent in 2017 due to market saturation.

A phone replacement rate of more than 50 percent means that many users change their products well before their contracts expire. Most Koreans go by a two-year contract with mobile carriers to subsidize their smartphones.

Koreans, cited to be among the most tech-savvy people worldwide, are keen users of different types of high-tech gadgets, including smartphones to which they were quick to adapt to following their introduction a few years earlier.

Last year, Koreans ranked seventh place in terms of smartphone users who totaled over 30 million, according to local and global data. Korea’s population is around 50 million.

Korea also was second in the world in terms of smartphone supply rates, with up to 60 percent of the mobile phone-using population equipped with a smartphone.