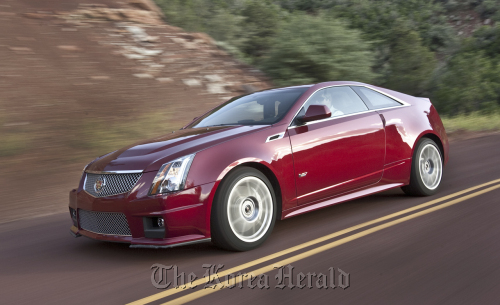 Cadillac CTS V coupe
General Motors Co., with renewed verve as the world’s biggest automaker, will be in the spotlight at the Detroit auto show next week taking on BMW and its popular 3-Series line with a new compact Cadillac.

The new model represents Chief Executive Officer Dan Akerson’s strategy for gaining ground in the compact-luxury segment. GM is trying to barge into the market for small, upscale cars, an important entryway for new customers that is dominated by German vehicles such as the 3-Series and the Mercedes-Benz C-Class.

“The gorilla in the room is the 3-Series,” Kurt McNeil, Cadillac’s vice president of sales, said this week in a telephone interview. The new car, planned for a Jan. 8 unveiling, will be called the ATS and go on sale in the third quarter. “It will be a key battle ground for us,” he added.

The introduction occurs on the eve of the media days at the North American International Auto Show. Organizers expect more than 5,000 journalists from more than 50 countries to attend two days of press conferences and almost 40 worldwide product unveilings, including the Mercedes SL roadster and Ford Fusion. Show organizers announced yesterday that they had signed a five-year contract to keep the show at Cobo Center in Detroit with an estimated economic impact to southern Michigan of $1.75 billion.

The auto show will take place against the backdrop of the improving U.S. auto industry. Sales rose by more than 10 percent for two years in a row, the first time since 1983 and 1984, and analysts estimate they will grow this year to the highest level since 2007. Domestic automakers GM, Ford Motor Co. and Chrysler Group LLC all gained market share last year and all project a full-year profit.

Cadillac’s aging lineup ranked No. 4 in U.S. luxury vehicle sales. The brand rose 3.7 percent last year to 152,389 led by deliveries of the CTS and SRX sport-utility vehicle, according to researcher Autodata Corp.

GM, based in Detroit, added some spice to the CTS nameplate in August 2010 by introducing a two-door version, which improved sales. The success of the coupe may foreshadow similar plans for the smaller Cadillac, McNeil said.

“It re-energized CTS and Cadillac but it wasn’t at the expense of our sedan business,” he said. “It does give us a little peek at what we’re going to deal with with ATS.” (Bloomberg)