South Korea, meanwhile, put its military on high alert, while people in the streets of Pyongyang broke into tears as they learned the news that Kim had died at the age 69 of heart failure. The United States said it was in close contact with allies South Korea and Japan. 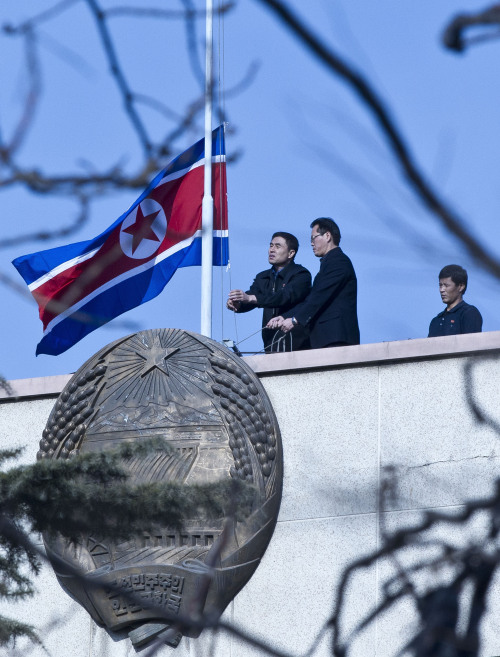 ``At the leadership of comrade Kim Jong Un, we have to change sadness to strength and courage and overcome today's difficulties,'' it said.

Kim Jong Il unveiled his third son Kim Jong Un as his successor a year ago, putting him in high-ranking posts. Little is known about the younger Kim, who is believed to be in his 20s.

Kim Jong Un regularly accompanied his father on trips around the country over the past year. Kim Jong Il inherited power after his father, revered North Korean founder Kim Il Sung, died in 1994.

The South Korean and U.S. militaries have bolstered reconnaissance and are sharing intelligence assets on North Korea, according to Seoul's Defense Ministry. About 28,500 U.S. troops are stationed in South Korea.

The White House said in a statement that it is closely monitoring reports of Kim's death.

``The president has been notified, and we are in close touch with our allies in South Korea and Japan. We remain committed to stability on the Korean peninsula, and to the freedom and security of our allies,'' the statement said.

The North said it would place Kim's body in the Kumsusan memorial palace in Pyongyang and would hold a national mourning period until Dec. 29. Kim's funeral will be held on Dec. 28, it said.

In a ``special broadcast'' Monday from the North Korean capital, state media said Kim died on a train due to a ``great mental and physical strain'' on Dec. 17 during a ``high intensity field inspection.'' It said an autopsy was done on Dec. 18 and ``fully confirmed'' the diagnosis.

Kim is believed to have suffered a stroke in 2008, but he had appeared relatively vigorous in photos and video from recent trips to China and Russia and in numerous trips around the country carefully documented by state media.

``It is the biggest loss for the party ... and it is our people and nation's biggest sadness,'' an anchorwoman clad in black Korean traditional dress said in a voice choked with tears.

Asian stock markets moved lower amid the news, which raises the possibility of increased instability on the divided Korean peninsula.

A South Korean Foreign Ministry official, speaking on the condition of anonymity because the ministry was debating ways to respond to Kim's death, said diplomats are shocked but are trying to assess the situation as best as they can.

Chae Jae-eun, a South Korean company worker, said from Seoul that she worried mostly about the economic implications Kim Jong Il's death would cause. She also said North Korea now stands at a crossroads as the country may isolate itself further or open up.

Lee Kyu-yun, a parliamentary official, said he is personally scared but refrained from speculating on future developments. He said he was considering stocking up on food in case military tension soars.

Traffic in the North Korean capital was moving as usual Monday. A foreigner contacted at Pyongyang's Koryo Hotel said hotel staff were in tears.