Officials including chief executive Kwon Oh-gap and union leaders signed an agreement at its Seoul headquarters for the initiative, the country’s smallest refiner said.

The payroll giving is widely used in advanced countries such as the U.K., Canada and New Zealand, which provide tax incentives to encourage more participants, but rare in Korea especially among large corporations. 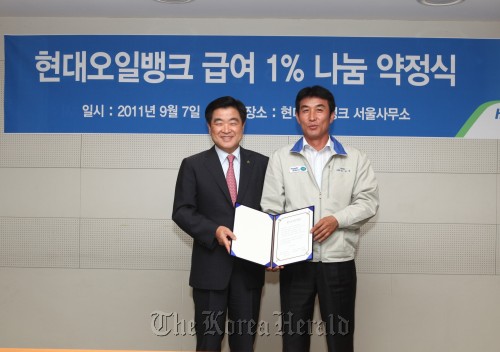 Hyundai Oilbank Co. chief executive Kwon Oh-gap (left) and the company’s labor union head Kim Tae-kyeong pose after agreeing Wednesday in Seoul to donate 1 percent of their pay to charity. (Hyundai Oilbank Co.)
“I am proud of and feel great admiration for the employees,” Kwon said at a ceremony. “I hope there will be other companies to follow this initiative.”

Under the plan, participants will be able to make regular donations until their retirement, unless they withdraw from the list, Oilbank said.

The Hyundai Heavy Industries affiliate plans to launch a charitable foundation in the coming months to distribute collected funds, and to form a board of directors with union members and outside experts to operate it within a transparent and fair system.

“Employees have been making donations on their own so far but this project will make their activities regular,” an Oilbank official said.

“It has significance in that all employees will transfer 1 percent of their pay no matter how much it is and regardless of their positions at the company.”

The payroll donation is the latest in a string of the refiner’s social responsibility activities.

Among them is a campaign named Coins Snowball, in which they donate a fraction of their salaries ― below 1,000 won (93 cents) or 10,000 won to social service groups. About 60 percent of employees are engaged in the program, Oilbank said.

To drum up staff participation and volunteering, Oilbank also offers donations that match those of the staff.

If an employee has donated money to a charity or completed social activities for 16 hours, the company donates the same amount to the organization.