Relatives of the diseased and doctors at Hanil General Hospital said Lee ― the mother of Jeon Tae-il, who killed himself in 1970 to protest brutal working conditions ― had been hospitalized since mid-July due to heart problems and was taken off artificial respirators at 11:45 a.m. 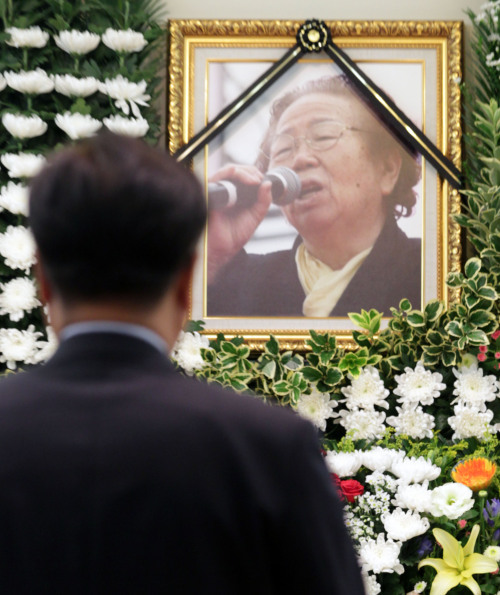 A citizen pays tribute to Lee So-sun, the mother of labor activist Jeon Tae-il, who passed away Saturday, at an altar in Seoul National University Hospital. (Yonhap News)
Doctors said Lee’s condition became serious suddenly earlier in the day, causing her organs to stop functioning. She also had no blood pressure.

The self-immolation of Jeon, who was a 22-year-old garment worker at the time, sparked nationwide protests by labor activists, which played a part in changing the way companies treated employees.

Representatives of the Jeon Tae-il Foundation said that funeral arrangements are being made although no decision has been reached yet if it will be a public or private ceremony.

After the death of her son, Lee became a labor activist in her own right and was arrested on several occasions. She received numerous awards for her activities and published a memoir in 1990.

Lee is survived by a son and two daughters. The funeral will be held at Seoul National University Hospital.