Although the markets for wine and whisky have been booming in recent years here, heavy duties on imported bottles have limited choices of local drinkers.

Under the deal, 15 percent tariffs on wine were removed on July 1, the first day of its implementation. Twenty-percent duties on whisky will be abolished over three years, and other spirits such as vodka, brandy and tequila will take seven years to become tariff-free.

Wineries in the EU are among the most ambitious contestants as the pact would result in cutting prices of their products about 13 percent on average, according to industry officials.

France, in particular, seeks to recuperate its title as Korea’s number one vineyard, which is now taken over by Chile since 2008. Though France defends the top earner spot given its generally high price tags, Chile outstrips France in terms of shipment volume, the Korea Customs Service noted.

The Latin American country’s share in the wine market here more than tripled to 23 percent in seven years, following a Korea-Chile free trade agreement in 2004.

“The FTA gives a strong sign that Korea wants to open its market to the rest of the world,” said Franck Lapeyre, chief executive of Pernod Ricard Korea, the Korean unit of the France-based drinks group.

“It will have very far-reaching consequences in the wine and spirits industry and an extremely positive impact on our business, as it eliminates import duties on French wines on the day of the implementation.”

Wine importers such as Keumyang International, Lotte Liquor BG and LG International’s Twin Wine are looking to uplift revenue from a larger pool of wine aficionados.

On July 1, Keumyang, the country’s top wine importer, dropped prices of its products by 5 to 15 percent.

Retailers also relayed events to enable customers to buy European wines for up to 80 percent cheaper prices. At E-Mart, a bottle of France’s popular Mouton Cadet red is sold for around 32,400 won, down from the previous 36,000 won.

“It’s a bit too early to measure the impact of the FTA because it’s been only a few weeks, but retailers’ promotions are clearly helping boost sales,” a Keumyang spokesperson said. “It would start coming to light in the next quarter.” 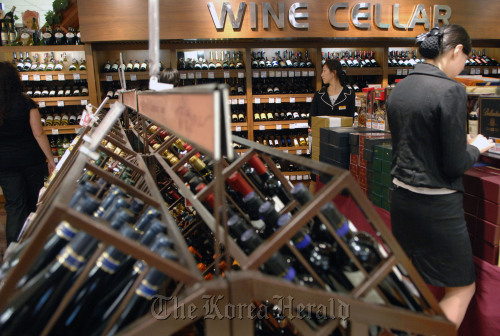 Bottles of wine are arranged at a wine shop in Seoul. (Bloomberg)
During the first weekend ― July 1-3 ― wine sales at E-Mart soared 47 percent compared with the same period a year earlier and 26.8 percent from the previous week, the company said.

Other discount store chains such as Lotte Mart and Homeplus also saw their wine sales up about 36 percent and 43 percent respectively for the same period. Department stores led by Lotte and Hyundai reported similar trends as well.

“We’ve held discount events once in a while, but from now on we can provide our customers with good wines for more affordable prices at all times,” an E-Mart official said. “Many customers have visited or called to ask price differences since the FTA took effect.”

Whisky producers are also gearing up for the long-waited deal as the 20-percent duties on Korean favorites such as Ballantine’s, Imperial, Windsor, Scotch Blue and Johnnie Walker would be dropped by 5 to 7 percent each year.

Korea is the seventh-largest Scotch whisky consumer worldwide in terms of value. It brought in 153 million pounds ($243.6 million) worth of shipments last year solely from the U.K., according to the Scotch Whisky Association.

“Despite Korea already being a key market for Scotch, its performance over the past years has been impeded by the high tariff and other trade barriers in the market,” said Martin Bell, the Edinburgh-based organization’s deputy director.

“The FTA gives distillers a significant boost as they seek to market their products to Korean consumers, who already have a taste for Scotch whisky, notably premium blends.”

While customers are longing to toast lower price tags, critics say the FTA’s impact would be minimal, provided extra surtaxes such as liquor tax and education tax on alcoholic beverages, all before importers and retailers add on their margins.

Some point out that customers would not directly benefit from lower prices as bars and drinking houses account for the biggest slice of whisky consumption.

Diageo officials said, “Whiskies are unlikely to become cheaper significantly considering that tariffs are imposed on import costs, not on retail prices. But we plan to reflect reduction factors brought by the FTA in prices of our products.”