[ The Korea Herald – Send E-mail ]
The solution to working for ‘Horrible Bosses’
By 이다영
Published : Jul 8, 2011 - 19:15
Updated : Jul 8, 2011 - 21:14
Seth Gordon knows from bad bosses. He once worked as a dishwasher in an old folks home, where his micromanaging supervisor told him everything he did was wrong ― whether it was stacking the plates, cleaning things in the right order or moving fast enough. “It was really about her need to be in charge,” Gordon says, “and I’ve seen versions of that ever since in different forms.”

“I have had some terrible bosses in my time, and I find that premise really relatable,” Gordon says. “And when I found out how tough it is out there, a story about frustration in the workplace was good timing. A lot of people can relate to that frustration; a job they don’t want to be in, but have no choice.”

“We’ve all had the boss who makes you drive home saying in your head the things you think you should have said,” adds Michael Markowitz, who conceived the story and is one of three writers on the film. “And I started thinking about the economy, and suddenly it wasn’t a choice to be in your job, and I thought about being trapped in your job.” 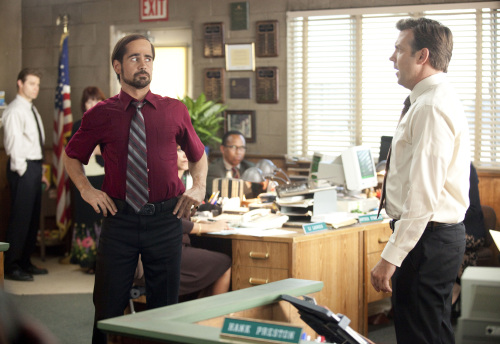 Colin Farrell, left, as Pellit Jr. and Jason Sudeikis as Kurt star in New Line Cinema’s comedy, “Horrible Bosses,” a Warner Bros. Pictures release. (MCT)
There’s little doubt that “Horrible Bosses” plugs into a universal set of emotions ― frustration with insensitive bosses and feelings of impotence regarding what to do about the work situation. And whether the boss is a micromanager, a bully or engages in sexual harassment, the feelings tend to be the same.

“These might be good at their job, but nothing else,” says Lisa Orndorff of the Society for Human Resource Management. “They don’t have the people skills, and when trying to connect the dots between the people and their work, there’s a disconnect there. They’re missing the bigger picture of what will make their department successful.”

That’s certainly the case with “Horrible Bosses,” which features three common bad-boss types. Spacey is “a sadistic micromanager who enjoys being in power and being in charge for its own sake,” says Gordon, who adds that one of the reasons he cast the Oscar-winning actor was because of his unforgettable performance as an abusive movie mogul in the film “Swimming With Sharks.”

Farrell, on the other hand, who plays against type and wears a cosmically bad hairpiece, “comes into the business with sheer nepotism,” Markowitz says. “He has no skills. He’s in over his head and doesn’t know it.” And even though the sexually harassing Jennifer Aniston character was written for someone “nowhere near her level of attractiveness,” according to Markowitz, “it doesn’t matter how attractive the person is. It’s demeaning. It’s not about sex; it’s about power.”

So what’s a put-upon worker to do? In a plot that riffs on the classic Alfred Hitchcock movie “Strangers on a Train” ― which is actually mentioned in “Horrible Bosses” ― the boys decide to murder each other’s oppressor. This being a comedy, it’s no surprise that they don’t exactly succeed. And in the real world, of course, homicide isn’t a real option ― unless you want to spend the rest of your life making license plates in prison.

“The main reason people leave their jobs is their boss,” Orndorff says. “The one thing I tell people” with employment issues “is keep breathing, get through today. If there’s an issue, talk to your boss. If you want the work relationship to succeed, there has to be give-and-take on both sides. There’s always two sides of the story, and you need to find a way to work together.”

“The key is to compartmentalize,” Markowitz adds. “It’s so easy to grumble all through dinner, thinking about how much that man or woman is making you miserable. You have to shut it off; you can’t give the boss that power. Get a hobby. Focus more on your relationships. Make that the focus of your life.”

And, he adds, “My point in the movie is that you don’t have to kill your boss. Just the thought you could, empowers you.”

Yet, according to Gordon, there is another solution, one that might not deal directly with the issue but provides plenty of personal satisfaction.

“I think a well-crafted prank can solve almost any issue in the workplace,” he says. “There are forms of Ex-Lax that taste like chocolate, and can also be mixed well in certain coffees, particularly if it’s covered up with creamer. It’s all about the workers banding together to complete the prank, and that can make the workplace a fun place to be.”