It was difficult to recall charismatic conductor Kolleen Park seeing her on a musical stage ― looking somewhat frail and vulnerable, her voice even trembled slightly as she led the song “You don’t know” in front of the press on Monday at Doosan Art Center in Yeonji-dong, central Seoul.

Park, a popular music director in South Korea, is getting ready to make a comeback as an actress after about 20 years in November with the musical “Next to Normal.” She will play the lead character Diana, a suburban mother who struggles with bipolar disorder.

The half-Korean, half-Lithuanian U.S. showbiz figure shot to fame here after immaculately conducting an amateur choir on the KBS 2TV entertainment show “Qualifications of a Man” last year. She has become quite a celebrity since then, appearing in numerous TV shows and commercials, publishing an autobiography and releasing an album, “Kolleen Selects,” which sold 40,000 copies within two months of its release. Her looking tense on stage was an unfamiliar sight.

“I get nervous easily. I wasn’t this nervous when I held my solo show in May but for this, I feel more responsible and anxious because I am doing it with everyone else. My history as an actress is forgotten in Korea, so I do feel burdened. But I am so happy to have such a chance again,” Park told the press in Korean. 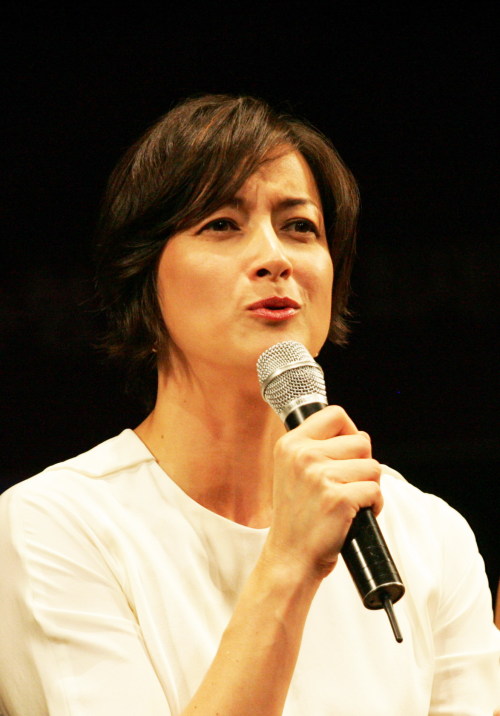 Kolleen Park speaks at a press conference on Monday at Doosan Art Center in Yeonji-dong, central Seoul. (Yonhap News)
She said that she came across this musical two years ago in New York and completely fell in love with it.

“After seeing the first act, I immediately sent texts to my acquaintances in Korea that the show is amazing and someone must take it to Korea. I thought to myself that for a musical like that, I would like to return to the stage. People only know me as a music director in Korea, but I actually started out as an actress,” said Park.

She auditioned for the role and met her lady luck. Veteran actors and actresses teamed up for the Pulitzer award-wining musical about a normal-looking household which is actually falling apart.

It premiered off-Broadway in 2008 and advanced into Broadway in 2009. Park will partner with top actor Nam Kyung-joo, who will play Dan, Diana’s patient and responsible husband.

The two had worked together many times before as music director and actor.

“I was worried because she is very tall, but was relieved to see that I am a bit taller even though she is wearing heels,” said Nam, jokingly.

“I have seen her many times as a music director, and if the passion of hers radiates in the form of acting, she will have a great result. In the role of Dan, I will always be listening to her, watching over her and waiting for her,” he said.

Park chipped in saying that she has always loved his simple and non-superfluous acting.

“I am going to take in everything he teaches me. We look quite good together, don’t we?” she asked.

Would it not be weird for Park to listen to others when she has been, for the last two decades, the one holding the baton? She said that she in fact loves being told what to do.

“When I have to be on stage or in front of a camera, I close the door to my music director-self and do exactly as told. I am actually very good at that. Music director Lee Na-young is very delicate. I never show my music director side when I am acting, and I shouldn’t. It is like I cannot play the role of a daughter when I am playing her mother. I want to learn new things,” said Park.

The musical will run from Nov. 18 to Feb. 12, 2012 at Doosan Art Center’s Yonkang Hall in Yeonji-dong, central Seoul. For more information, visit www.musicalheaven.co.kr.