These 12 stories are hard to believe, heartbreaking and horrifying. American director N.C. Heikin’s documentary, “Kimjongilia” is a piece of cinematic work devoted to telling the stories of survivors of North Korea and its regime.

The movie’s title, “Kimjongilia,” refers to a hybrid red begonia that was named after North Korean leader Kim Jong-il in celebration of his 46th birthday. The flower apparently symbolizes love, wisdom, justice and peace; the movie says Kimjongilia and the qualities it supposedly represents are nothing but illusions in the world’s most isolated country.

The movie features 12 North Korean defectors and their stories, combined with archival footage of North Korean propaganda films. The characters are the survivors of North Korea’s concentration camps, severe food shortage and other forms of repression and violations of human rights. 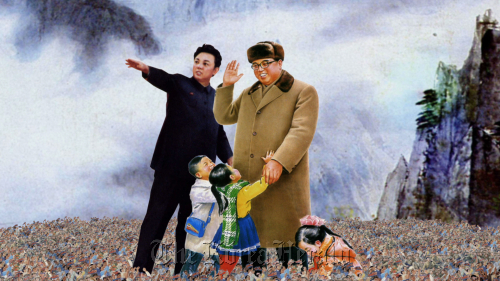 A North Korean propaganda painting of late leader Kim Il-sung (right) and his son Kim Jong-il as seen in “Kimjongilia,” an American documentary on 12 North Korean defectors and their stories. (Cracker Pictures)
Shin Dong-hyuk, one of the featured characters, was born and raised in a prison where he suffered from chronic malnutrition. He was never told why his parents were sent to live there, and knew nothing of the outside world until he met a new prisoner from Pyongyang.

As the new prisoner kept telling him about the food he used to eat in the city, Shin began to think of escaping. He finally made his run, surviving the electrified fence while his fellow escapee was electrocuted.

Throughout the interview, Shin remains calm, without showing much emotion. “I could not help thinking about the food,” he says in the film in his rather monotonous voice. “The thought of food would just keep popping up in my head.”

“Having to think of what to eat when there is practically no food is probably the greatest human sadness,” says Kang Chol-hwan, another featured character who spent nine years at Yodok prison camp in South Hamgyong Province in North Korea. Kang, who made it to South Korea in 1992, is the first North Korean defector to reveal the existence of the concentration camps in North Korea and later became a reporter for the Chosun Ilbo in Seoul.

Another featured character Kim Young-soon, who now serves as the vice president of Committee for the Democratization of North Korea, a North Korean defector group in Seoul. Kim cannot help but express her anger towards Kim Jong-il and his regime in the movie. The former dancer in North Korea and her family members were sent to Yodok concentration camp after her close friend, Seong Hye-rim, became Kim Jong-il’s mistress. Kim’s family was sent to the camp only because Kim was presumed to be aware of Seong’s affair with the dictator.

Other characters include Kim Cheol-woong, an elite pianist who now performs in South Korea; Lee Shin, a former singer who was sold as a sex slave in China while trying to defect to Seoul; and Byeon Ok-soon, whose brother was publicly executed for crossing the China-North Korea border to bring food to his family.

“On my way to work, I had to grab my stomach hard because it would make me less hungry,” Lee, the former singer, says in the film. “It’s still a mystery how I was able to act as if I were happy while performing. I still wonder how I could have sung a song with lyrics such as ‘How are we ever going to finish so much rice?’ while I was in fact starving.”

The film has been officially selected by the 2009 Sundance Film Festival and has won best film in 2010 at the World Festival Brussels & Human Rights and Democracy Network.

“Kimjongilia” opens in theaters in Korea on June 23. Director N.C. Heikin will arrive in Seoul on June 21 to promote the film and meet the viewers in South Korea.