Published by the Institute for Economics and Peace, the GPI showed that both countries’ ratings had plummeted since last year, especially for the North.

“Pyongyang’s relations with neighboring countries became even more strained in 2010 following the administration’s decision in March 2010 to sink a South Korean navel vessel, the Cheonan, and to fire missiles at Yeonpyeong in November,” said the report. 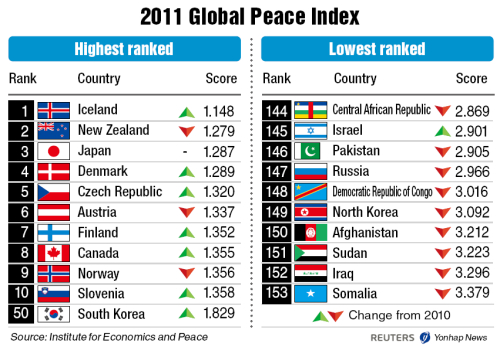 The North was also listed in the report as both one of the “top five fallers in the 2011 GPI” and one of the “10 countries least at peace.”

Pyongyang’s score was influenced by both its military expenditures and high crime rate.

“North Korea’s annual military expenditure was estimated in 2002 to amount to around $5 billion and it is thought to have increased to around 20 percent of GDP in 2009, by far the largest proportion of the 153 countries surveyed and more than twice the level of Saudi Arabia, the next largest at 9.4 percent,” it said.

“Sharp increases in the number of homicides and rises in violent crime and the likelihood of violent demonstrations from relatively low levels reflect unconfirmed reports of a dramatic escalation in violence and brutality at the hands of the regime, with public executions tripling last year, to at least 60.”

The report mentioned other offenses by the North, including the illicit use of Chinese cellphones and counterfeiting of U.S. dollars.

Also taken into consideration were defector accounts, describing a “new shoot-to-kill policy” for those illegally crossing into China.

The countries found to be the most at peace were Iceland, New Zealand and Denmark at first, second and third, respectively, with Japan right behind.

North Korea stood alongside Afghanistan, Sudan, Iraq and Somalia at the bottom of the barrel.

The index considers conflicts, safety and security in society, militarization and also considers indicators like the potential for terrorist acts, the likelihood of violent demonstrations and crime.