May might be a morbid month for Camarata Music Company.

For the second year in a row Camarata is putting on a requiem. This year, an orchestra will accompany the 55-voice CMC Chorale for Mozart’s Requiem on May 7.

There will also be a performance by the CMC Chamber Singers of Argentinean-American composer Ariel Quintana’s “Mass from Two Worlds.” Quintana’s work gets its name from the combination of classical and Latin influences. 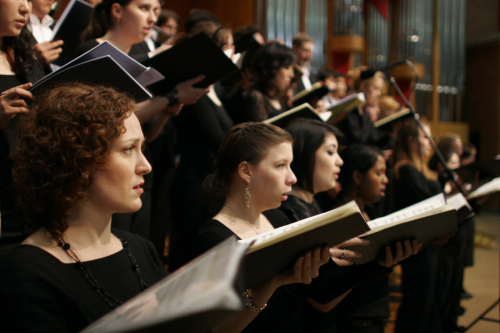 Camarata is a non-profit organization that performs classical music about three times a year, with the biggest event being the annual December concert of Handel’s Messiah. The group brought in U.S. choral director Weston Noble to conduct the 2010 year-end concert, which had more than 1,200 attend.

The group is also preparing for a performance of “Little Shop of Horrors” on June 18 and 19.

Thought to be composed for his own death, and completed by his student, Mozart’s Requiem is one of the most important classical choral works.

Goessl said Camarata chose the piece because it was challenging and also because it was one of the best known choral works and people had wanted to do it for some time. He added that Easter-time was a traditional time for requiems to be performed.