Any doubts about the transformative abilities of ballroom dance should be quashed after watching one season of “Dancing With the Stars” and seeing celebrities going from flabby to fit in a matter of weeks.

Sure, they’re rehearsing five to six hours a day, week after week. But the spins, turns, lifts, kicks and fast footwork of the routines show the athleticism and technique that make up the waltz, tango, cha-cha and other dances.

“I think people are happy it’s a workout,” says Erin Stevens, president of the Pasadena Ballroom Dance Association. “At the end of a class you feel like you’ve enriched your life in so many ways ― you’ve burned calories and made friends and learned an art form.” 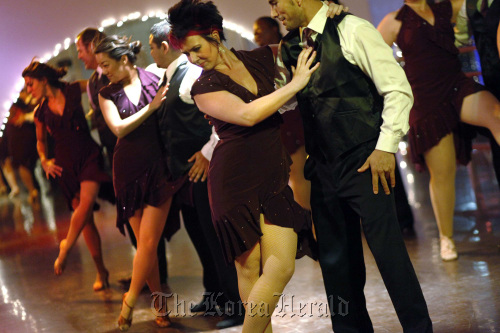 A salsa dance group, including Rebecca Rea (second from right), made up of 3rd Street Dance students, performs for a class at the studio, near the Beverly Center, in Los Angeles, California, Dec.15, 2010.  (Los Angeles Times/MCT)
Workout intensity varies by dance, but all have something to offer. “In the rumba, which is a sensual dance, you work your hips a lot,” says Peri Rogovin, owner of 3rd Street Dance in Los Angeles, where many “DWTS” contestants rehearse. “That’s good for the waistline, and also for coordination.”

Faster dances, such as the salsa and cha-cha, build endurance, while slower ones, like the Argentine tango, feature more muscle control via leg extensions and holds, torso rotations and maintaining posture. Legs get most of the workout in ballroom, but the arms are engaged as well, toning muscles and raising heart rates.

Diana Bolinger has been taking swing and other ballroom dance classes at PDBA for a dozen years and credits it with regaining her fit self after having children. “It’s mostly cardio, but you’re also strengthening your arms and legs. You can sometimes feel it the next day.” While she didn’t need to lose weight, she adds, “I felt like I was more fit and not as flabby.”

Most studios offering ballroom classes for pairs don’t require students to pony up a partner; dancers typically rotate partners anyway. But the ballroom craze has also spawned fitness-dance hybrid classes in which an instructor leads a roomful of people in easy choreographed steps. Louis Van Amstel, a “DWTS” regular and champion competitive dancer, kicks off a class called Dance Blast at Crunch in L.A. later this month, teaching men and women such dances as the cha-cha, salsa and jive to an eclectic and high-energy mix of music.

“It works from a fitness point of view because a lot of people can do it,” Van Amstel says. “Everybody can learn how to dance.”