Rabbit babies are private, introverted and withdrawn. Or quietly charismatic, thoughtful and calm? It is hard to generalize a destiny using a centuries-old system based on natural elements, marked by fixed colors and assigned a dozen animals as they correspond to the hour, date, month and year of birth.

One thing is clear, said Elizabeth VanderVen, an assistant history professor at Rutgers University in Camden, New Jersey, and a specialist on Chinese and eastern Asian culture: “Rabbits are considered to be especially lucky financially,” she said, noting that some believe rabbits are the luckiest of all signs in the Chinese Zodiac. 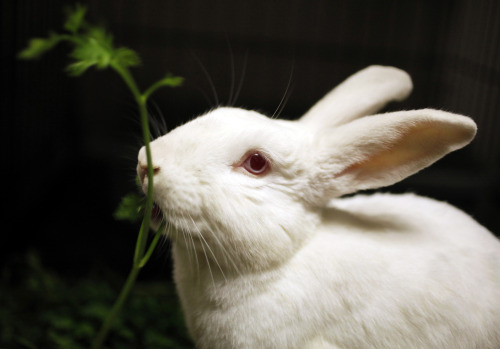 There’s more to the Chinese Zodiac than a quick hippety hop into 2011 for people born in the Year of the Rabbit. (AP-Yonhap News)
That, VanderVen said, could be especially true this year because the 2011 rabbit year corresponds with the element of metal, symbolizing great wealth.

In Vietnam, the rabbit is not a rabbit at all but a cat, which failed to make the top 12 in China, according to legend.

The major holiday in Asia shifts somewhat over January and February. This year it starts Feb. 3 and always lasts for 15 days.

The Chinese calendar not only follows the 12-year cycle but characteristics within the cycle are touched by the influences of fire, earth, metal, water and wood, each with a yin (female) form and a yang (male) form. To make leap year adjustments, the colors of white, black, green, red and brown also are assigned.

This rabbit year is white yin metal, likely making the precious metal of silver prominent, so watch for lots of silver souvenirs.

“The 2011 rabbit will obtain wealth if she or he works hard and diligently,” VanderVen predicts.

Her personality list for rabbits: honest, sensitive, tactful, stylish, sophisticated, virtuous and modest, but they also are viewed as snobbish, standoffish, self-righteous, oversensitive and a little unpredictable.

Boston’s Brittany Falconer, 23, is a rabbit. Is she more an impish old-time cartoon bunny Bugs than the impish cartoon sexpot Jessica?

“I can’t make a rabbit face like Jessica,” Falconer said, “but I guess I’m somewhat rabbit-like: quiet, observant and capable of sneakiness!”

Much of last year was not fueled by rabbit luck for Falconer. She graduated from college in 2009 and could not land a full-time job until September.

“I do think I’ve been very lucky in enjoying an uptick in complimentary drinks,” she said. (AP)