There are several hot places to hang out in Seoul, but there are few that does so to the extent of “Kondae street,” located in eastern Seoul adjacent to Konkuk Univ. Station Lines No. 2 and No. 7.

Just as the name suggests, the subway station is located right next to Konkuk University campus, with the university hospital next to exits No. 3 and No. 4. The area is always bustling with students, those visiting the hospital, and mostly people out to dine and party across the road with friends and loved ones at the “Streets of Flavor. 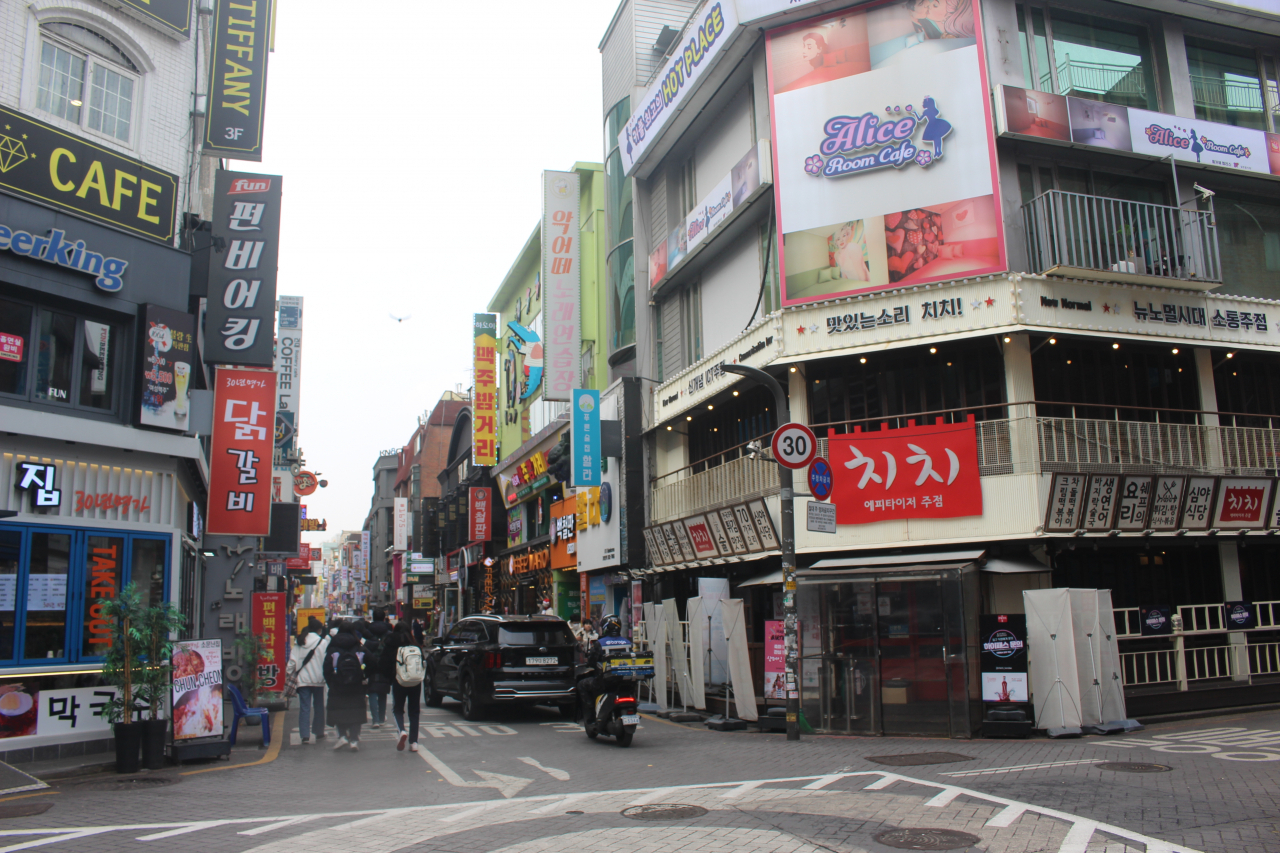 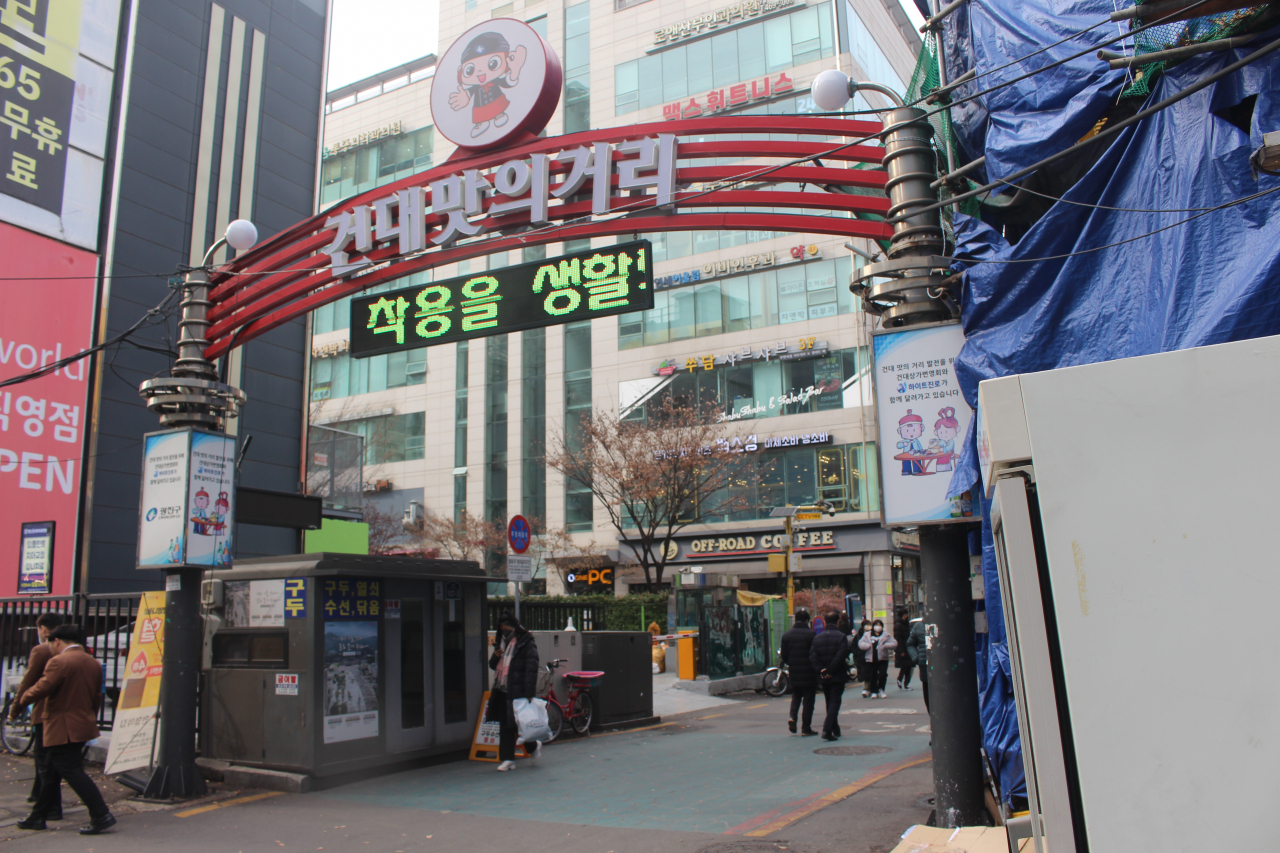 The somewhat odd-sounding name, which is a direct translation of “Mat-ui-geori” in Korean, refers to the main street that is accessible from exits No.1 and No. 2 of the station. Most people use exit No. 2, which has a wooden staircase usually packed with people waiting for their dates or friends, particularly on weekends.

Near the exit lies an outdoor performance space, “Cheongchun-tteurak,” which means “The Garden of Youth” in Korean. It is a place reserved for street performers, who again are usually seen on the weekends. This area is strictly non-smoking.

The famous main street is not hard to find, as the entrance just 30 meters away from exit No. 2 is decorated with a huge sign of its name. Scattered around are restaurants and clothing shops with relatively low prices, especially when compared to shops in affluent Gangnam or Apgujeong, southern Seoul.

Kondae has a vibe different from other popular areas in Seoul.

While Hongdae, on the west side of the city, tends to attract people with its numerous clubs and bars, the streets of Kondae have more eateries and overall less flamboyancy.

Kondae’s bars are mostly located within smaller alleys rather than on the main street. There are a few famous bars near the main street that became a safe haven for party-goers during the pandemic, as venues categorized as “clubs” were temporarily closed due to social distancing rules.

Yoo Kyung-min, a 36-year-old who lived in the area four years until earlier this year, said it is ideal for couples like him who had just gotten married. “My favorite thing about the area was that it was so convenient. It’s close to the Star City (shopping mall) so we could just drop by the theater to catch a movie, then go have beer afterwards. After our daughter was born, it was great because the place is close to Han River,” he said.

The Star City shopping complex houses E-Mart, Lotte Department Store and other shops, along with a movie theater. It is located near exit No. 5. And Konkuk Univ. Station is just one stop away from Ttukseom Park Station Line No. 7, which is right next to Ttukseom Hangang Park.

After walking a few minutes from exit No. 6, stacks of shipping containers can be seen. This peculiar design is what is known as the “Common Ground,” which could have been just another run-of-the-mill shopping center, but its unique structure gives it a memorable identity. 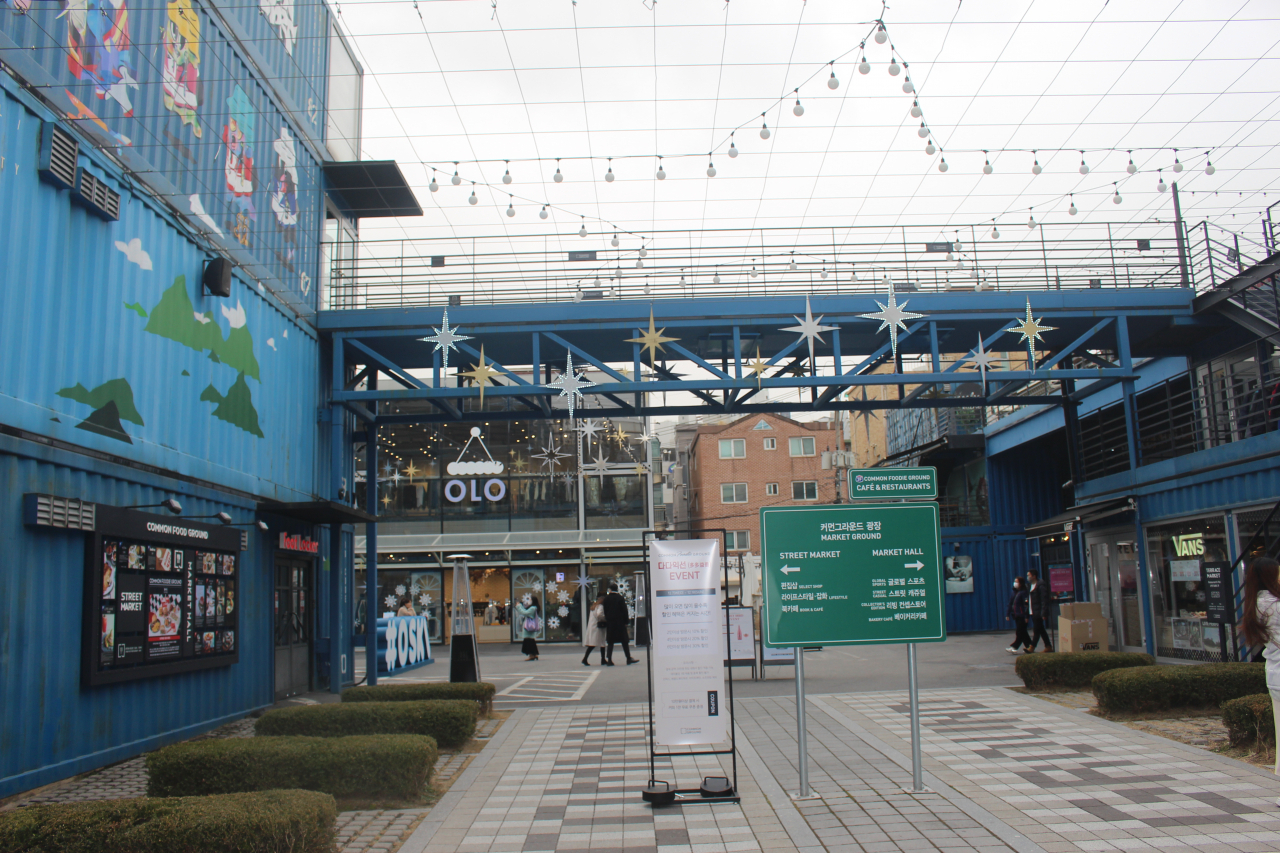 Common Ground shopping mall, located a few dozen meters from Exit No. 6 of Konkuk Univ. Station on the Seoul Metro, is seen in this photo. (Yoon Min-sik/The Korea Herald)

The shops on the first and second floors sell mostly clothes and ornaments, and on the third floor the outdoor restaurants offer a nice view. Photo zones can be found located within the grounds of the structure.

Some say the areas around Kondae are becoming just like any other dining and partying district in Seoul. For instance, the “Kondae Rodeo Street,” near exits No. 5 and No. 6, was designated in 2002 by the Gwangjin-gu district office as the “fashion district.”

This street, stretching 500 meters, once had around 50 clothing shops, but now has only about nine. And so with only a few clothing stores and some restaurants, the street is simply a replica of the main street today.

In a meeting of the district council of Gwangjin-gu held Wednesday, council member Jang Gil-cheon pointed this out and called for means to develop “Kondae Rodeo Street” in a way that helps it stand apart from its competition, the distinctive “Kondae Street.” 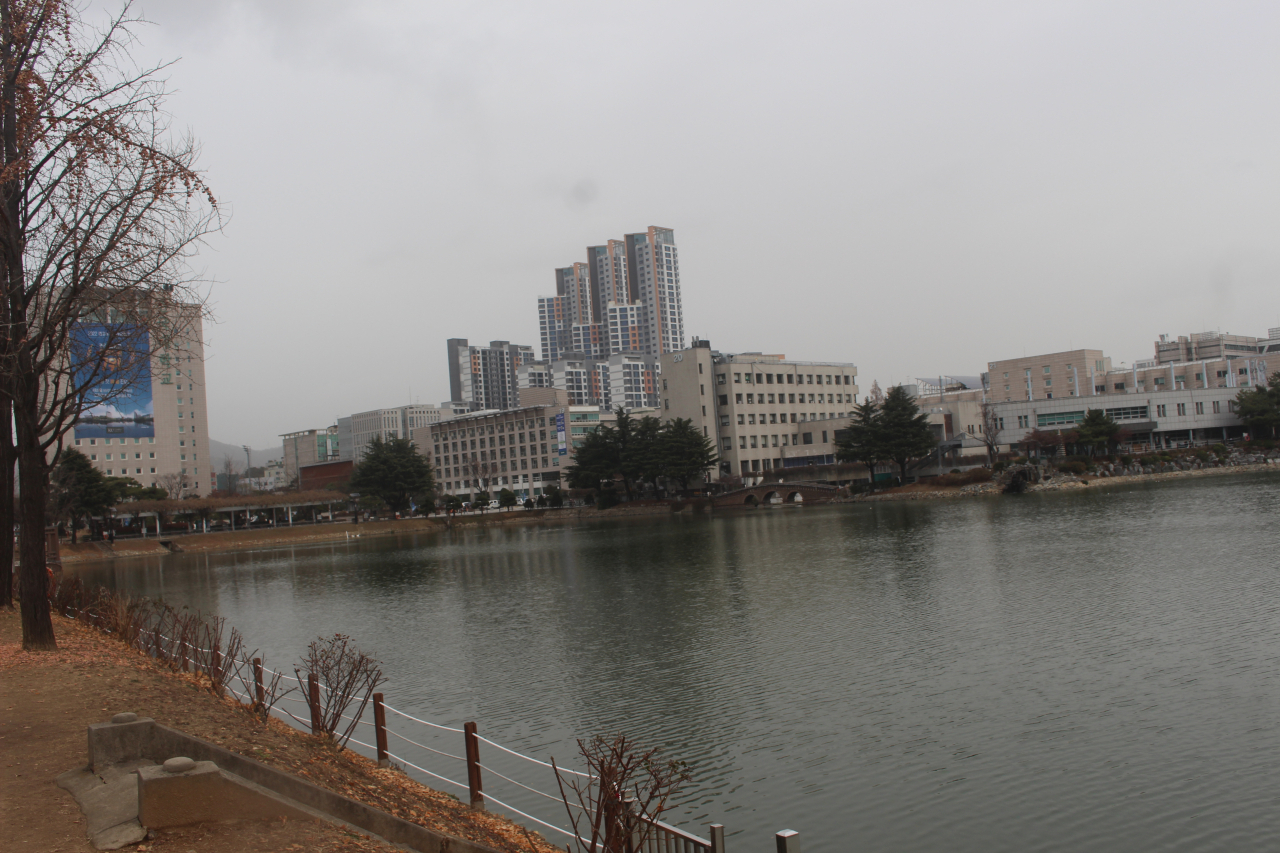