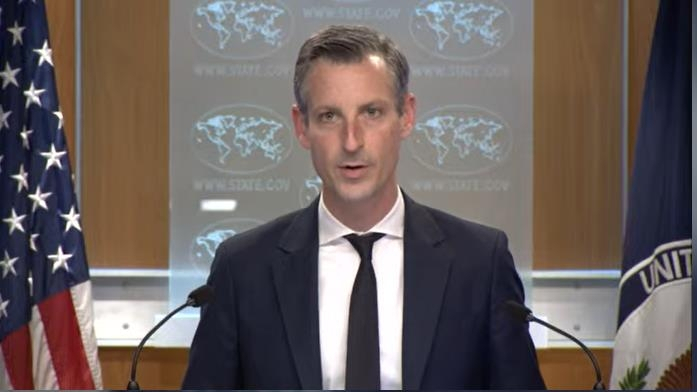 Department of State Press Secretary Ned Price is seen speaking during a daily press briefing at the department in Washington on Tuesday in this captured image. (Washington)

WASHINGTON-- The United States may consider appointing a special envoy solely dedicated to issues related to North Korea should there be active dialogue with the reclusive country, a state department spokesperson said Tuesday.

The department spokesperson, Ned Price, also underscored Pyongyang continued disregard for US overtures as a reason for Sung Kim concurrently serving as special envoy for North Korea and US ambassador to Indonesia.

"If we are to arrive at a position where it does make sense to have an individual singularly focused as special envoy for the DPRK, we can cross that bridge. But right now Sung Kim has been doing a really tremendous job as our ambassador and as a special envoy," Price said when asked if the US would consider appointing a special envoy solely dedicated to North Korea issues.

Price blamed the current lack of North Korea's interest in dialogue for Kim having to serve two positions.

"There's a very practical issue at play. We have made very clear that we seek to engage directly with the DPRK and see if we can arrive at practical, pragmatic steps we can take towards what is our ultimate objective, which complete denuclearization of the Korean Peninsula," he told the press briefing, adding the North has shown no interest in engaging in dialogue so far.

President Joe Biden recently nominated a state department official, Julie Turner, to serve as special envoy for North Korean human rights, a post that has been vacant for over six years since January 2017.

The state department spokesperson noted there were "few people" with the experience and knowledge that Julie would bring to the post if appointed.

However, Price insisted the department has worked tirelessly to help improve human rights conditions in North Korea and elsewhere.

"Even as this position has been vacant, and of course, it is a position that wasn't filled by the previous administration so it's been some time since we've had Senate confirmed individual in this position, state department officials at all levels from the secretary on down have been actively engaged on issues of human rights," he said.

"This administration, as you know, is committed to placing human rights at the center of our foreign policy. And for decades, the United States has championed efforts to improve respect for human rights and indignity of North Koreans and will continue to promote accountability for the DPRK government, for its egregious human rights record," added Price. (Yonhap)