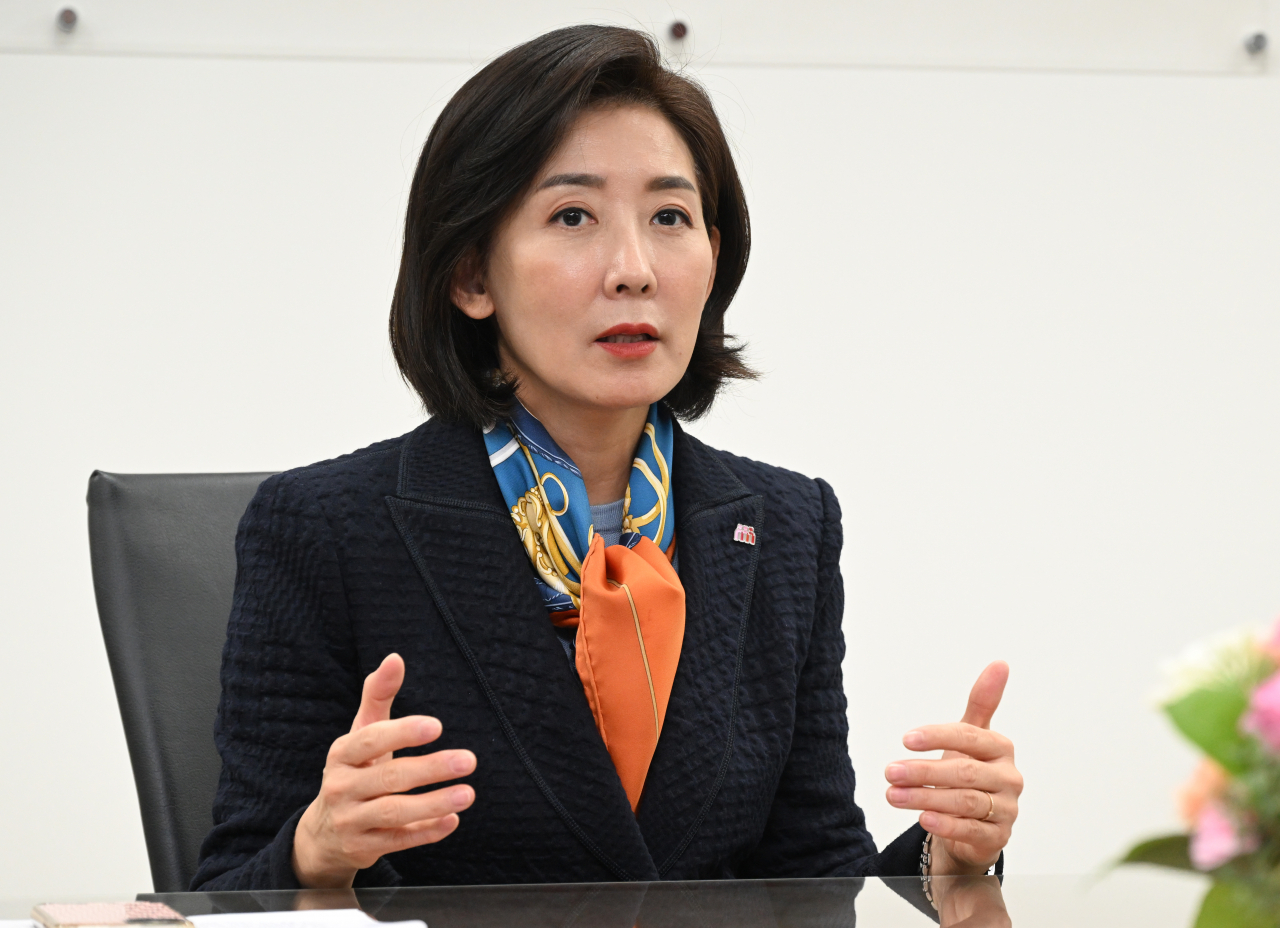 Na Kyung-won, chief of the Presidential Committee on Ageing Society and Population Policy, speaks at her office in Seoul in an interview with The Korea Herald in December. (Lim Se-jun/The Korea Herald)

Na Kyung-won, a four-term lawmaker and the chief of the Presidential Committee on Aging Society and Population Policy, said young Koreans are reluctant to get married and have children because their lives are “very difficult” with “no expectation that their lives will be any better and happier.”

Young Koreans living in a highly competitive society have low expectations for their futures, with the thought that they might not live happier lives than their parents. This growing negativity appears to have affected their decision to build a family, thus further dragging down the nation's already stagnant fertility rate, Na told The Korea Herald. Na, a political heavyweight contending for the ruling party's leadership in March, cited high youth unemployment and the rising cost of housing and child care as the other factors hindering childbirth in the country.

The average number of babies born to each couple was 0.81 in 2021, the world’s lowest for the past two years in a row, and the only nation with a number of less than one per couple. Over the past decade, the nation injected nearly 400 trillion won ($313 billion) to address the declining population issue, but failed to buck the trend.

“This gives us a task to alleviate (the issue) policy-wise, but also to approach the problem through social and cultural perspectives in order to bring about a change," Na said.

A recent survey by the US polling agency Pew Research Center echoed her remarks. Six out of 10 Koreans responded that their children’s generation would be poorer than their parents’ generation, the highest since the survey was first conducted in 2013.

The population decline was recorded in 2020 for the first time, and the trend has continued since. From January to October last year, there was a natural population decrease of 95,879 people.

Na said the state’s coffers aimed at tackling the shrinking population have been spent “inefficiently."

“By the Organization for Economic Cooperation and Development’s standards, we spent less on directly related to childbirth, such as infertility and childcare,” she said.

The OECD average expenditure is 2.4 percent of the gross domestic product, but South Korea only spends 1.4 percent, according to the committee head. The nation needs to “start bitterly reflecting” on its inefficient spending which has given no results, she added.

She is now “closely examining" policies implemented by the Hungarian government.

Since 2019, the Hungarian government began offering married couples an interest-free 10 million forint ($26,500) loan. For couples with one child in a five-year period, they do not have to pay interest on their loan and monthly repayments are halted for three years. The birth of a second child allows them a further three-year pause on repayments and they do not have to pay back the loans at all if they have three children.

This was the nation’s bold scheme to boost its lagging birth rate. Hungary’s average fertility rate was 1.49 children per woman compared to the European Union’s average of 1.59 in 2019.

She believes that giving young parents a large chunk of funds at once, as Hungary does, will be more practical in alleviating housing and child-caring costs, than Korea's current approach of doling out money little by little.

“Considering Korea’s GDP, we will have to give about 200 million won (for each couple) to have some effect,” she said. The average selling price of apartments nationwide in December last year was about 533 million won. The average price of an apartment in Seoul was 1.26 billion won.

The Yoon administration, starting in January, has decided to offer 700,000 won per month to families raising newborns for the first year and 350,000 won for the 12 months after that. The benefits will rise to 1 million won and 500,000 won, respectively, from 2024.

To boost the low birth rate, Na stressed that it is important to change young people’s perceptions of some social and cultural factors, such as career disruption or gender roles.

“The reason many couples are reluctant to have a child is that pregnancy and childbirth is a negative factor in their careers, including promotion and career disruption,” she said.

Company support for childbirth and child care should be mandatory, although it will take some time to make this a reality. Na will strive for public officials to change government policies first, and then urge large companies to follow. She recently met with leaders of the nation’s top conglomerates and urged them to adopt such child care-friendly policies.

Although it would take some to see drastic changes, the government is taking some steps toward changing company policies. It recently decided to increase the statutory parental leave period from one year to one year and six months, a measure that is pending approval in the National Assembly.

It is a common phenomenon that as the number of highly educated women increases, the birth rate falls in many countries. But when women with higher education face gender inequality from both society and their families, they are more hesitant to have a child, she said.

Unfortunately, for women in Korea, “both gender equality in society and family are not good,” she said. In other words, women – who tend to face discrimination in many professional fields – also have to shoulder a greater burden for housework and child care at home.

The Global Gender Gap Report 2022 published by the World Economic Forum echoed her remarks. Gender equality in Korea, Asia’s fourth-largest economy, was still at the bottom, ranking 99th out of 146 countries.

Efforts to deter further population decline are necessary, but it is also time to accept the fast-changing demographic structure, she said.

Korea is expected to become a superaged society by 2025, with 20 percent of the population aged over 65 then. By 2035, 1 in 3 Koreans will be over 65, according to Statistics Korea.

In particular, the aging population is rapidly increasing as those from the baby boomer generation are now in their 60s. Korea’s baby boomers are those born between 1955 and 1963 after the Korean War (1950-53), accounting for about 9 million people.

“We used to only focus on raising the birth rate,” she said. “But now, policies need to change to both mitigate and adapt to the declining population.”

Having a child here used to be a sort of “investment” as they support their parents when they grow up, she said. Things have changed. Having a child is only seen as a “cost” and parents are “not ready for their old age” after investing money in their children.

“If young people are well prepared for old age, they may feel less burdened about having a child,” Na said.

The nation also needs to reflect on how it can extend the period and terms around the elderly workforce, she said.

“Instead of continuing to support them, we need to consider various solutions such as extending the retirement age or changing the wage system -- from the current system in which you earn more the longer you stay -- so that they can continue to work,” Na said.

“It is necessary to think about enhancing their economic capabilities and creating opportunities for them,” she said. “This is different from the issue of just giving them money.”

It is also time to think about things that have been “taboo,” Na said, referring to embracing foreigners to tackle the declining population.

“Until now, our society has been very closed to immigration,” she said. “However, the economy is not sustainable if the population continues to shrink at this pace.”

For a sustainable Korea, the country needs to be more open about immigration, the committee head said. The nation needs to implement a policy that focuses on “accepting good human resources.”

The government announced last month that it would establish a policy system for a mid-to-long-term immigration policy to tackle the challenges of a declining population.

To attract foreign talent, employment-based visa requirements for foreign professionals hired by small and medium-sized enterprises will be relaxed from five to three years. The annual quota for skilled foreign workers will also be expanded from 2,000 to 5,000 this year.

Tackling the declining population and aging society has been a major challenge for Korea. The Presidential Committee on Ageing Society and Population Policy Committee was founded in 2003. The judge-turned-politician was appointed by President Yoon Suk-yeol to lead the committee in October last year.

The conservative heavyweight expressed her intent to run for the party's leadership election to be held on March 8, and is currently ranked at the top in multiple suitability surveys from party supporters.

Na entered politics in 2002 after resigning as a judge and declaring her support for presidential candidate Lee Hoi-chang, serving as a special female adviser. In 2004, she was elected a proportional representative of the Grand National Party, a predecessor to the current ruling People Power Party. Three years later, she was spokesperson for then-presidential candidate Lee Myung-bak and played a crucial role in his eventual win.

Na has been acquainted with President Yoon since they studied at the Seoul National University School of Law.