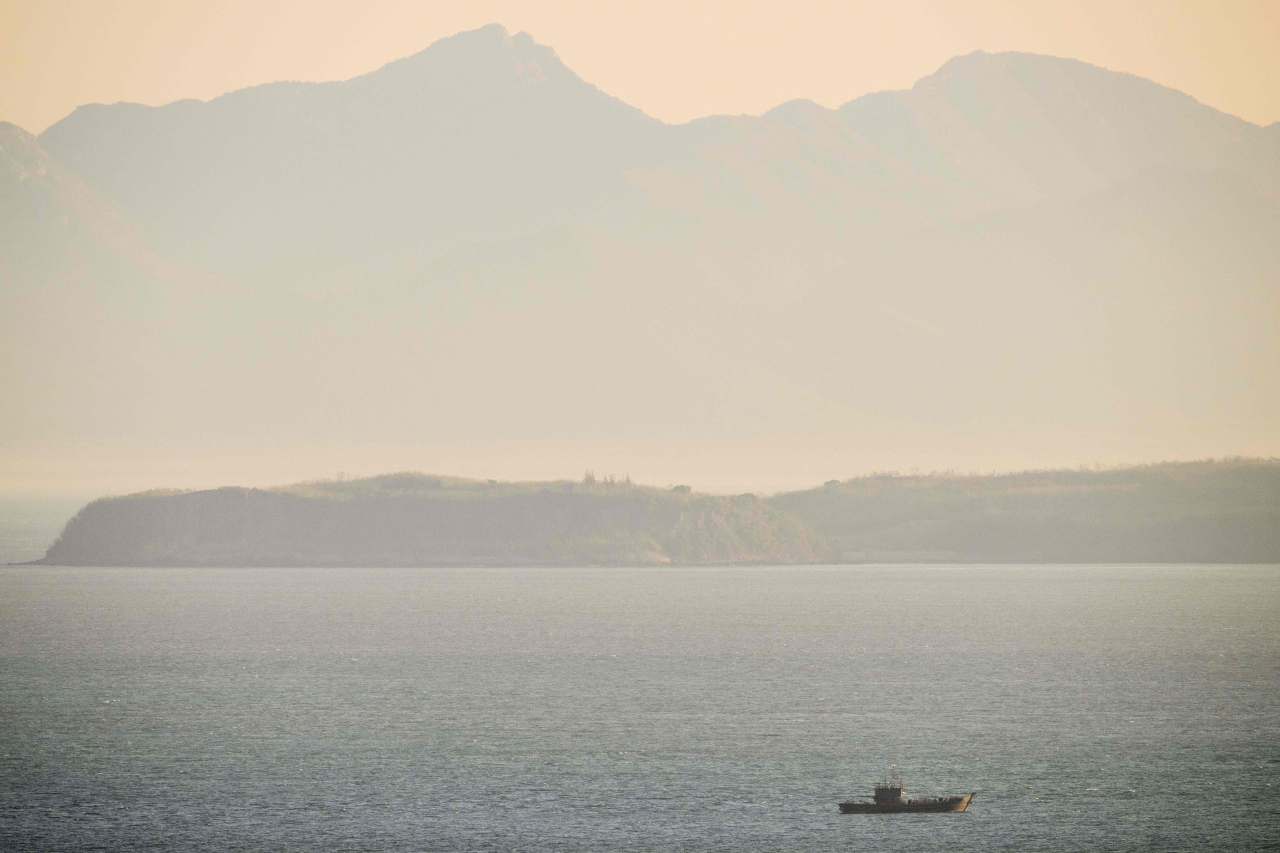 In this picture taken on Oct. 28, a fishing vessel is seen in North Korean waters near North Korea's mainland, as photographed from a viewing point on Baekryeong Island, located two kilometres from the de facto maritime border and just 14 kilometres from the North Korean mainland. Far closer to the North Korean mainland than it is to the South, Baekryeong is a fortress: tanks are parked at the sides of roads, there are guard posts on every hill, and the picturesque beaches are covered in "dragon's teeth" fortifications to deter invasion. (AFP-Yonhap)

The United States on Friday imposed sanctions on a number of individuals and entities, including North Korea's border guard bureau, for serious human rights violations and other crimes.

The move came as part of the designation of over 65 individuals and entities in 17 countries by the US to mark International Anti-Corruption Day, which falls on Friday, and Human Rights Day, observed annually on Dec.10th.

Secretary of State Antony Blinken said the designations partly aim to disrupt and deter "the government of the Democratic People's Republic of Korea's role in restricting freedom of movement, mistreating asylum seekers, and exploiting laborers to generate revenue for the state," referring to North Korea by its official name.

To this end, the Department of Treasury said it has designated North Korea's State Security Border Guard General Bureau.

"People inside the DPRK reportedly are subjected to forced labor, torture, and other human rights violations and abuses at the hands of the government," the treasury department said in a press release.

"Due to their dire circumstances, tens of thousands of North Koreans have fled the country in the past two decades," it added. "The journey to leave the DPRK is particularly treacherous due to attempts by state security agencies, including the BGGB, to thwart escapes through tight border controls, including land mines and shoot-on-sight orders that have resulted in the deaths of numerous North Koreans.

"DPRK nationals are also often forced to work in foreign countries to generate foreign currency that is utilized to support the DPRK's weapons of mass destruction and ballistic missile programs," the treasury department said.

"Foreign entities that are involved in the use of DPRK labor enable the continued poor treatment that these workers endure, which includes constant surveillance, being forced to work long hours, and having a significant portion of their wages confiscated by the regime," it added.

SEK, which itself was designated in December 2021, has "also evaded sanctions targeting the DPRK government using front companies," according to the department.

The fresh US sanctions came as the US and 30 other countries, including South Korea, Japan, Britain, France and Germany, called on the UN Security Council to "publicly" address human rights violations in North Korea.

"The human rights violations and abuses of the DPRK's repressive government are well documented," they said in a joint statement, delivered by US Ambassador to the United Nations Linda Thomas-Greenfield on their behalf in New York.

"The country's repressive political climate allows a coercive system of governance that diverts resources to weapons development," they added. "Forced labor -- both domestically and overseas -- also plays a key role in sustaining the government and generating the revenue it uses to fund its weapons programs."