The Army retired a scout dog, famed for his role in locating a missing teenager in 2019, from surveillance duty due to old age on Thursday, officials said, concluding his storied decadelong career.

The armed service held a retirement ceremony for Dalgwan at the 32nd Infantry Division's maneuver battalion unit in Sejong, about 120 km south of Seoul.

The 10-year-old German Shepherd rose to national prominence in 2019 when he played a pivotal role in the search mission for then-14-year-old Cho Eunnuri who had been missing for 10 days on a mountain in Cheongju, 137 kilometers south of Seoul.

Dalgwan was the first to discover Cho alive, along with his handler Sgt. Maj. Park Sang-jin, in the mission that involved over 5,700 personnel from the police, the fire department and the military. 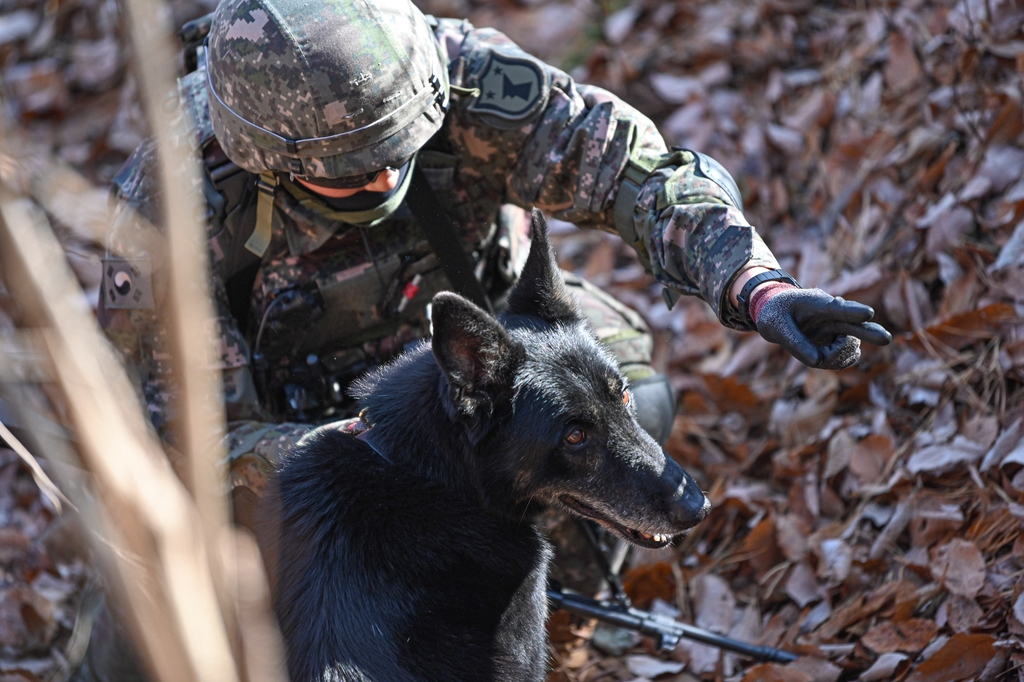 Dalgwan, a scout dog of the Army's 32nd Infantry Division, takes part in his final training session on Dec. 8, 2022, at the division's maneuver battalion unit in Sejong, about 120 kilometers south of Seoul, ahead of his retirement, in this photo provided by the armed service. (Yonhap)

Cho and her family were present at the ceremony at the unit, where he will remain a military dog with a lighter support mission.

"Without the Army service members and Dalgwan, our family would not be here today," Cho's father, Cho Han-sin, was quoted as saying. "I hope Dalgwan, who devoted his life for his country and the people, spends the rest of his days in peace and happiness."

The Army said it decided to retire the veteran dog from surveillance missions due to his age -- roughly in the 70s in human age.

His decadelong service saw him morphing from a onetime deserter to one of the country's best-known, most beloved military dogs.

On Feb. 28, 2014, Dalgwan took military staff aback as he broke out of a military truck on its way to an Army dog training facility. He was captured the next day following a search operation involving staff from the police and military.

But he became an up-and-coming star in 2016 when he received a top prize at a military dog contest in 2016. He remained one of the top-ranked dogs in other training programs in the following years.

Born in 2012, Dalgwan underwent the Army's grueling 20-week training for military dogs the following year and was assigned to the 32nd Division.

There are currently some 790 military dogs across the Army and the Air Force, assigned to such duties as patrolling and tracking, according to the defense ministry.

More than 40 military dogs have been relieved from service this year, with retired dogs spending the rest of their lives either at the barracks or with adopted families. (Yonhap)