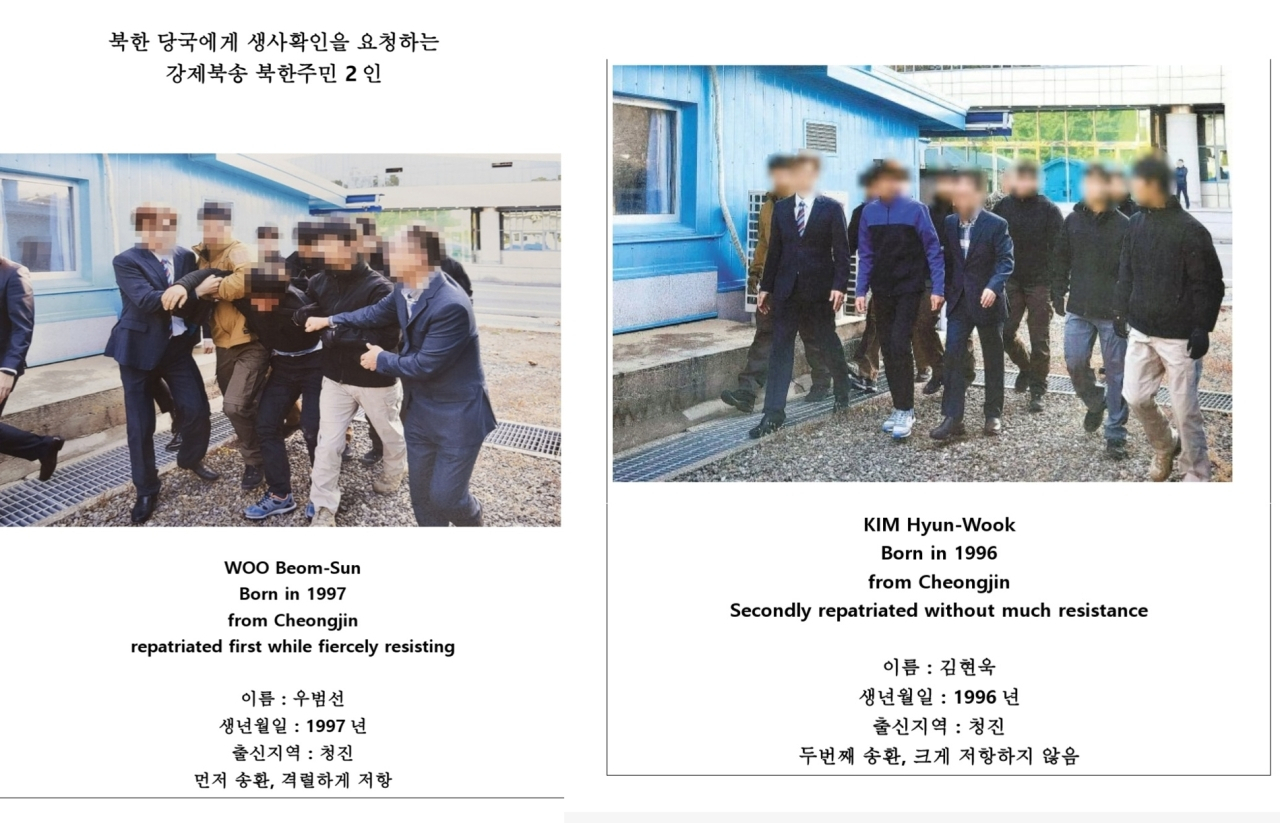 South Korean lawmakers of the International Parliamentarians’ Coalition for North Korean Refugees and Human Rights disclosed the identities of two North Koreans who were forcibly repatriated in 2019. (courtesy of IPCNKR)

South Korea’s Ministry of Unification says it would seek to amend its laws to protect North Koreans who fled their country from being repatriated against their will.

The proposal for amendment to laws on the protection of North Korean refugees, posted on Wednesday, requires the Minister of Unification to confirm the settlement intentions of North Koreans who came to South Korea by sea or land or via a third country.

The amendment would also give the Minister of Unification authority to allow North Koreans under criminal suspicions to be investigated in South Korea after deliberation by government committee.

Under the amendment, the Minister of Foreign Affairs would be given the authority to decide on measures to protect North Koreans who ask for protection with diplomatic offices abroad, and provide support for their entry to South Korea.

South Korean authorities, explaining the deportation, said at the time that the two men were suspected of murdering their captain and crew members as they escaped from their squid fishing boat. Their request to defect to South Korea also appeared to be insincere.

In June, the Ministry of Unification released photographs of the two men resisting as they were handed over to the North Korean side of the border at the truce village of Panmunjom.

Human Rights Watch, a non-governmental organization based in New York, said in a report following the photographs’ release that it “considers the men’s forcible return to a country where they faced torture, forced labor, and possible execution a clear violation of their human rights.”

Reps. Ha Tae-keung, Ji Seong-ho, Hong Suk-joon and Hwangbo Seung-hee of the ruling People Power Party posted the identities of the deported North Korean men for the first time in September, calling on North Korea to disclose their whereabouts.

The lawmakers said both men -- named Woo Beom-sun and Kim Hyun-wook -- are from Cheongjin, a city in North Korea’s Hamgyong Province, and should be about 25 to 26 years of age if they are still alive.