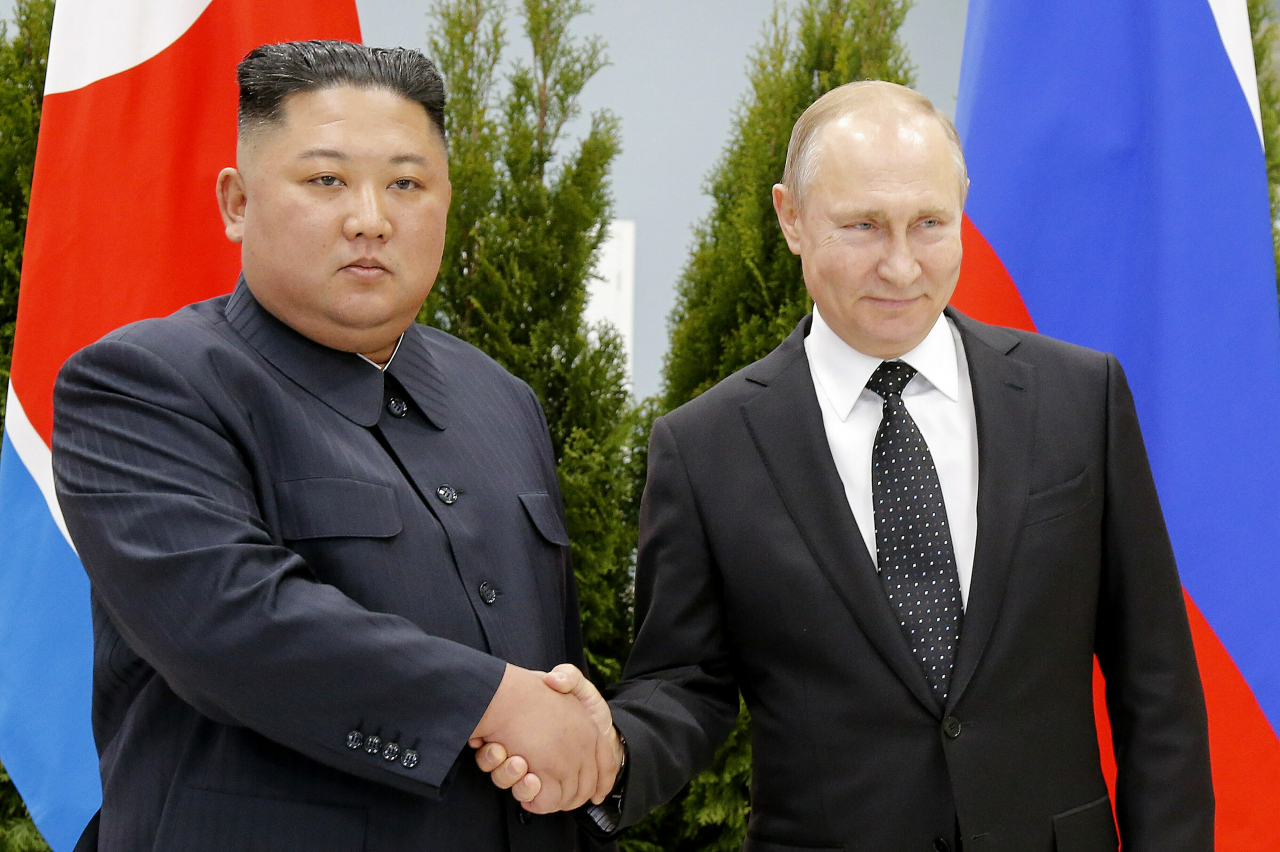 Russian President Vladimir Putin (right) and North Korea's leader Kim Jong-un shake hands during their meeting in Vladivostok, Russia on April 25, 2019. North Korea on November 8, 2022 accused the United States of cooking up a "plot-breeding story" on its alleged arms transfer to Russia, arguing it has never sent artillery shells to Moscow.(AP-Yonhap)

WASHINGTON-- Russia continues to look to North Korea and Iran for weapons to be used in its illegal war against Ukraine, a state department spokesperson said Wednesday.

"We know that Russia's brutal assault against Ukraine has forced Russia to extend its relatively scarce quantities of weaponry, including ballistic missiles," the department spokesperson told a daily press briefing.

"So the concern remains that Russia may look to other countries, including Iran, to help replenish its stocks of ballistic missiles, just as we continue to be concerned that Russia continues to look to the DPRK when it comes to other forms of assistance for its illegal war against Ukraine," Price added.

The US earlier said the North was in the process of secretly shipping "millions" of artillery shells to Russia by obfuscating the true destination of its shipments.

John Kirby, National Security Council coordinator for strategic communications, said it was still not clear whether the North Korean shipments have been delivered.

"We know that the Russians have continued to express interest in obtaining North Korean artillery," Kirby said in a virtual press briefing held earlier in the day when asked if Russia was currently using North Korean ammunition in Ukraine.

"I don't believe we can say today that we have seen definite indications that that transaction has been consummated," he added.

Price said the US will continue to work with its allies in the region to counter any security challenges posed by North Korea.

"So there is no question that Northeast Asia has become a more dangerous neighborhood and there are a number of threats that could lead to that, but none more so than what we have seen from the DPRK," the state department spokesperson said.

Price has also said Pyongyang may conduct a nuclear test at any time, noting the country appears to have completed all preparations for what will be its seventh nuclear test.

"We know that in the absence of the DPRK's willingness to take us up on the offer of dialogue and diplomacy, that what is most important is coordination and defensive and deterrent steps with our allies in the region, and there are no more important allies in the Indo-Pacific than our allies in Japan and the Republic of Korea," he said, referring to South Korea by its official name. (Yonhap)