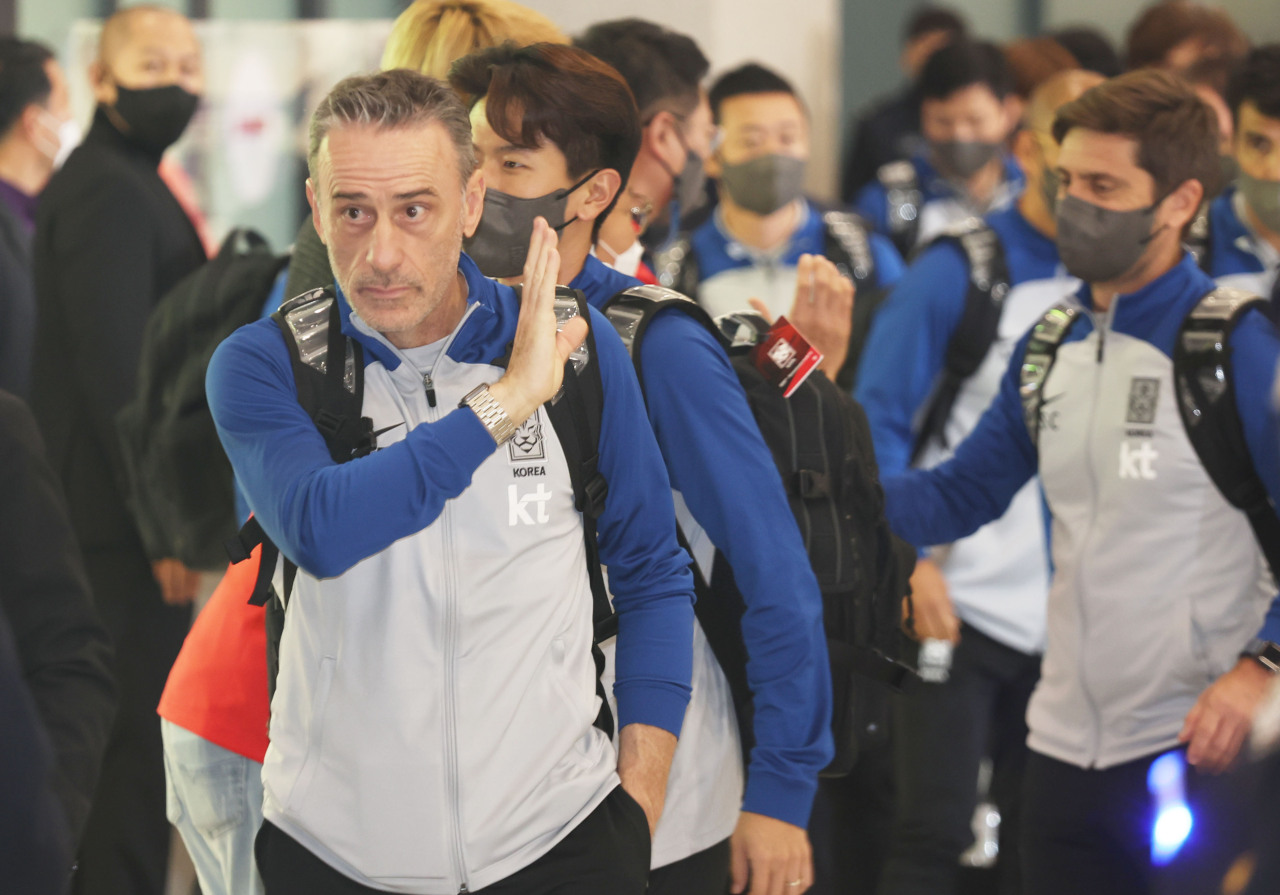 South Korea's head coach Paulo Bento waves his hands towards the welcoming crowd at Incheon International Airport, after returning from the ongoing World Cup in Qatar. (Lim Se-jun/The Korea Herald)
Paulo Bento will soon be leaving South Korea after concluding a mostly successful four-year tenure with the country's men's national football team. But South Korea will always be in his heart, the Portuguese tactician said Wednesday.

Bento and his players returned home Wednesday evening after competing in the round of 16 at the FIFA World Cup in Qatar this week. They lost to Brazil 4-1 in South Korea's first knockout appearance in 12 years and their third overall.

Following the loss, Bento announced he will not return as South Korea's bench boss, saying he had made up his mind in September and had reaffirmed that decision with the national federation and his players.

South Korea, as a country, carries significance for Bento on both personal and professional levels. At the 2002 World Cup, Bento played his final match for Portugal when they lost to South Korea

1-0 to go home after the group stage. Then 20 years later, he coached the very country that had ended his World Cup dreams to the knockout stage.

"Things didn't go so well in 2002, because Portugal did not have great results and I finished my international career," Bento recalled in a media scrum at Incheon International Airport, west of Seoul. "But in 2022, things have gone well overall. Although we were eliminated in the round of 16, we still stuck to our style of play against a powerful team. And I will always be connected with South Korea, both in terms of my career and my personal life."

Speaking of the South Korean style, Bento had earlier faced criticism for his tactical inflexibility. His signature brand of buildup play, predicated on winning the possession battle and patiently creating offensive chances from the back, had worked well against inferior competition in friendlies and World Cup qualifiers. His detractors, however, doubted it would have the same effects against stronger teams, such as Uruguay and Portugal, two of South Korea's group stage opponents in Qatar.

Bento stuck to his guns and proved his system could work by coaching the team to the knockouts. He complimented his players for buying into his philosophy and trusting in it from day one.

"Both in life and football, having trust in what you do is really important. From the beginning, I explained to the team that this was the style that would best help us achieve our objective,"

Bento said. "And even more importantly, the players trusted that it would work. With all due respect to South Korean football, this was a style that hadn't been used here before. But the players still believed this would work and stayed on the right path. I'd like to congratulate them for their professionalism at the World Cup."

Bento, the longest-serving head coach in South Korean national football history, didn't elaborate on reasons why he'd decided not to sign a new contract with the team.

"There are a lot of factors that go into a decision like this,"

Bento said. "I will always remember these players. I wish them all the best in the future."

As for his most memorable moment as South Korea's head coach, Bento said it was difficult to pick one, though the win over Portugal in Group H that lifted South Korea into the knockouts stood out.

The win itself, however, wasn't going to be enough. South Korea needed Uruguay to beat Ghana in the other Group H match that had kicked off at the same time but that had run past the South Korean win. The team gathered in the center of the field to watch the end of Uruguay's 2-0 win, allowing South Korea to advance on a tiebreaker.

"When the Uruguay-Ghana match ended and we sealed our spot in the round of 16, that was the happiest moment for me," Bento said.

"It was the moment when we accomplished our goal." (Yonhap)