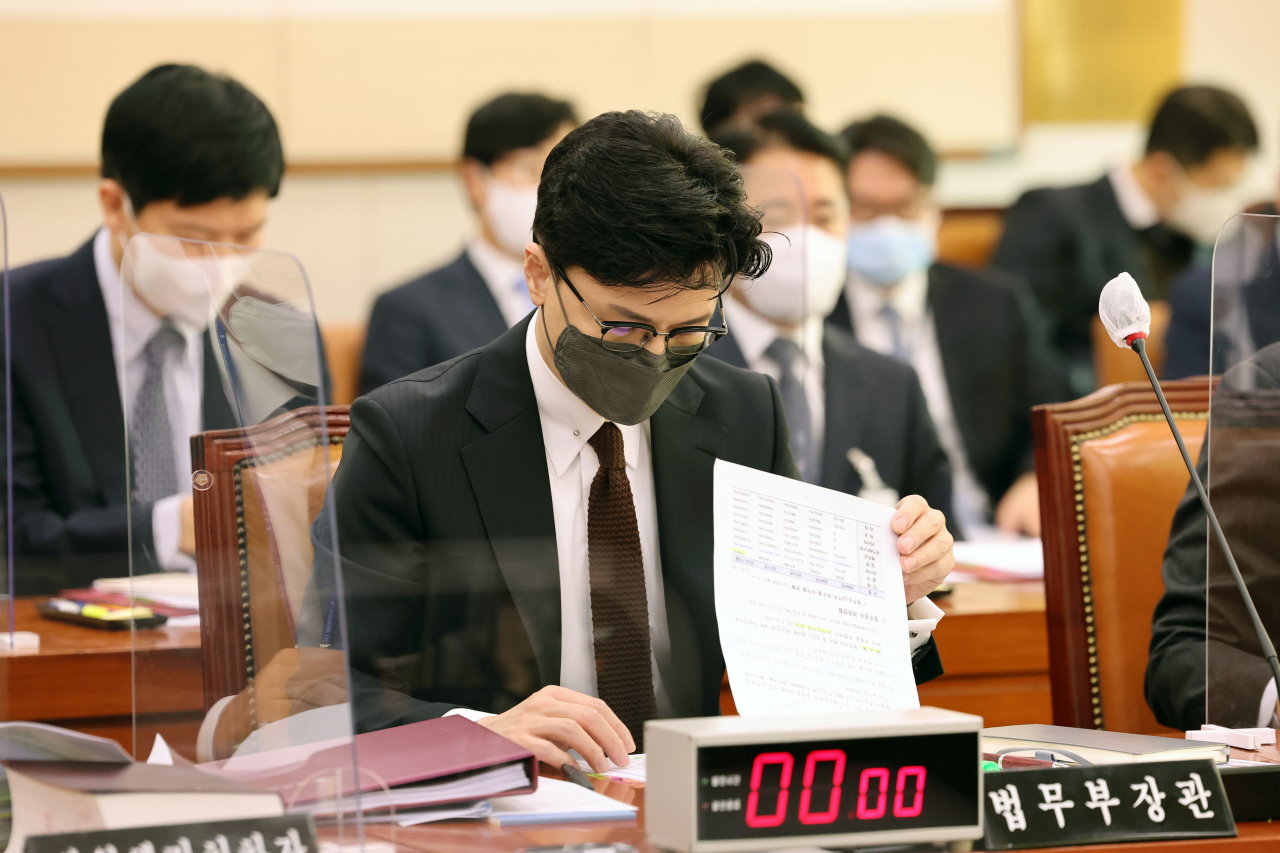 Justice Minister Han Dong-hoon reads documents at the plenary session of the Legislation and Judiciary Committee held at the National Assembly in Seoul, Wednesday. (Yonhap)

Amid growing speculation that Justice Minister Han Dong-hoon may run for the ruling party leadership early next year, Han dismissed the possibility Wednesday, saying he will continue to do his job as the head of the ministry.

Han met with reporters before attending a plenary session of the National Assembly's Legislation and Judiciary Committee on the day and said, "No one has suggested me (to run for the party leadership)."

"I have done my best as a justice minister although it has not been enough. That is all I am going to think about," Han added.

Rumors of Han being a candidate for the party leadership began Saturday with the remarks by ruling People Power Party Floor Leader Rep. Joo Ho-young. During the conference at the Suseong University in Daegu, Joo said, "The person who can win in the Seoul metropolitan area and win popularity among the MZ generation -- young generations encompassing those born from the 1980s to 2010s -- should be the new party leader." He then cited the figures mentioned as probable candidates and added they are not enough.

After the remarks, Han suddenly emerged as a possible party leader as some analyzed that Han, who has public awareness and an elite background, meets the conditions mentioned by Rep. Joo. In addition, Joo met separately with President Yoon Suk-yeol on Nov. 30, leading some to assume that the remark reflected Yoon's intention.

The controversy continued as the People Power Party’s interim chief Chung Jin-suk, who also had separate talks with Yoon, echoed Joo’s words, saying the next party leader should gain support from younger voters.

Han ranks second in early polls for the next president, following Lee Jae-myung, the leader of the main opposition Democratic Party of Korea who narrowly lost to Yoon early this year, according to multiple surveys.

Many within the ruling party showed skepticism regarding Han being a candidate for party leader, saying it is unrealistic and would do more harm than good for the party. Han is one of the closest confidants of the president, but he has no experience in the political arena.

Some critics view the controversy over the next party leader as a battle for control between the current party leadership and the pro-Yoon faction to eventually appoint the person they want, respectively, as party leader.

As controversy heated up, Joo on Monday met with reporters at the National Assembly and elucidated that his remarks were not about Han, labeling the numerous interpretations as an "overreaction."

Yoon also reportedly expressed displeasure with rumors of Han's candidacy as party leader on Tuesday. Daily newspaper Kookmin Ilbo reported Wednesday that Yoon said, "Han is not ready for politics, and he is not in a situation to do politics right now."

Rep. Kwon Sung-dong, another close confidant of Yoon, met with reporters after the gathering of pro-Yoon lawmakers on Wednesday morning and said that the assumption of Han being party leader candidate "has been suggested only by a very small part of the party." Kwon added that Han will make his own judgment, stressing his skepticism as Han has not been in office for long and there is little time left, with the vote expected to be held in late February or early March next year.

Currently, the term of the emergency steering committee for the People Power Party ends on March 12, 2023.