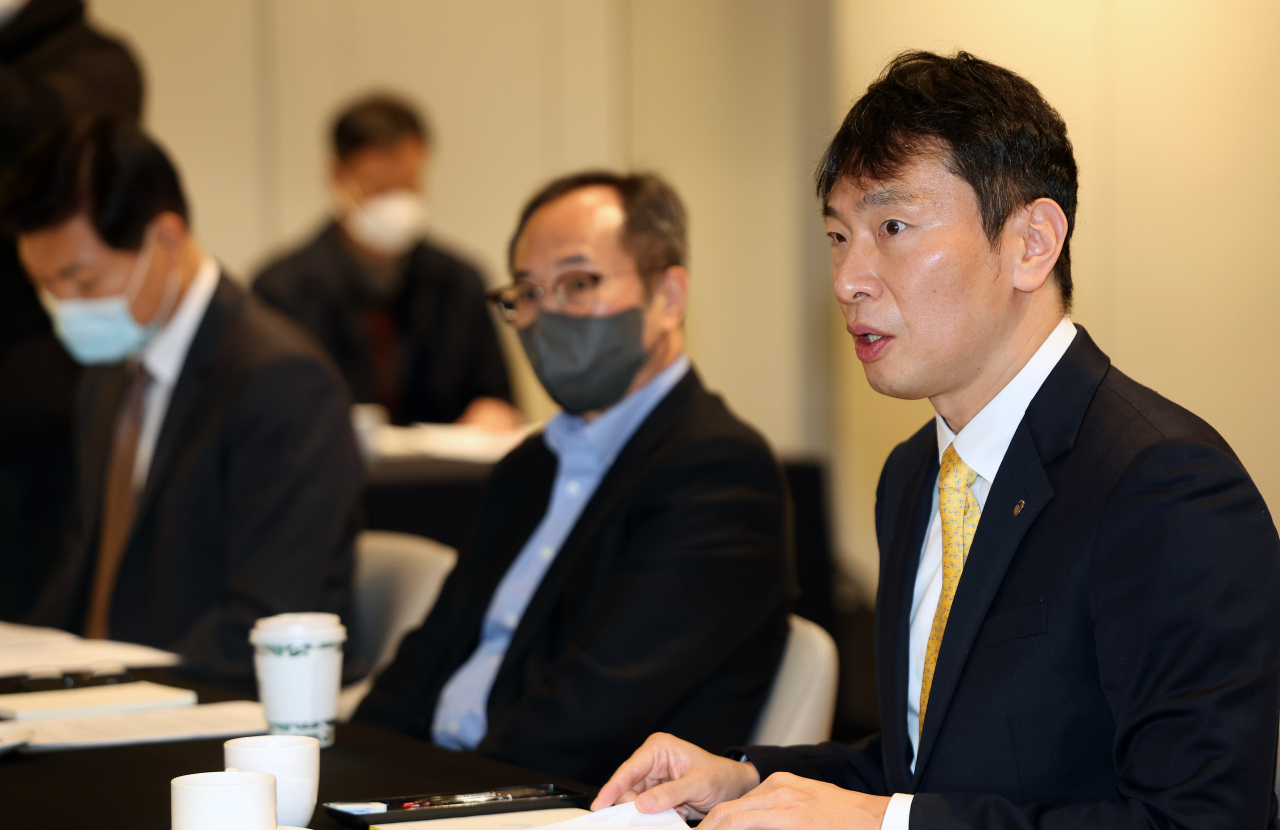 Lee Bok-hyun, head of the Financial Supervisory Service, speaks at a meeting with top officials of major think tanks in Seoul on Wednesday. (Yonhap)

South Korea's financial regulator will keep up its monitoring on short-term money and remain ready to take action in case market volatility spikes amid lingering worries over a liquidity crunch, its chief said Wednesday.

"The bond market has been stabilized more or less as a result of taking market stabilization measures in cooperation with relevant agencies, such as the finance ministry, the Financial Services Commission and the Bank of Korea," Lee Bok-hyun, head of the Financial Supervisory Service, said in a meeting with heads of major economic think tanks in Seoul.

"However, as anxiety could spread again going forward, we will closely monitor with a sense of tension and timely respond in case of market jitters," he added.

The corporate bond market has been roiled by a series of unexpected events in the money market, including a rare default on a municipal government-guaranteed debt and a local insurer's decision not to exercise a call option for hybrid bonds.

Though those market-hurting decisions were taken back later, anxiety has spiked, sending borrowing costs soaring and making it harder for businesses to secure funds for operations amid already high interest rates in place to fight inflation.

The government has unveiled a series of measures to pump liquidity and urged banks and state-run enterprises to reduce or evenly distribute bond selling in a bid to stabilize the debt market.

Lee said that the FSS will push to induce local financial firms to continue to play the role of providing funds for businesses in need, while at the same time encouraging them to strengthen the overall risk-management and increase capital to stave off a crisis.

He also vowed to make efforts to protect ordinary people and other at-risk populations from fast-rising borrowing costs and economy slump.

During the meeting, think tank chiefs voiced concerns that global monetary tightening and high interest rates will likely be here to stay for longer, urging financial authorities to beef up monitoring on the possibility of money leaving for safer profits such as bank deposits.

Some also worried about growing debt burden on households and mounting credit risks for marginal or zombie firms from fast-rising borrowing costs that have been driven up in line with the central bank's rate hikes to fight inflation. (Yonhap)