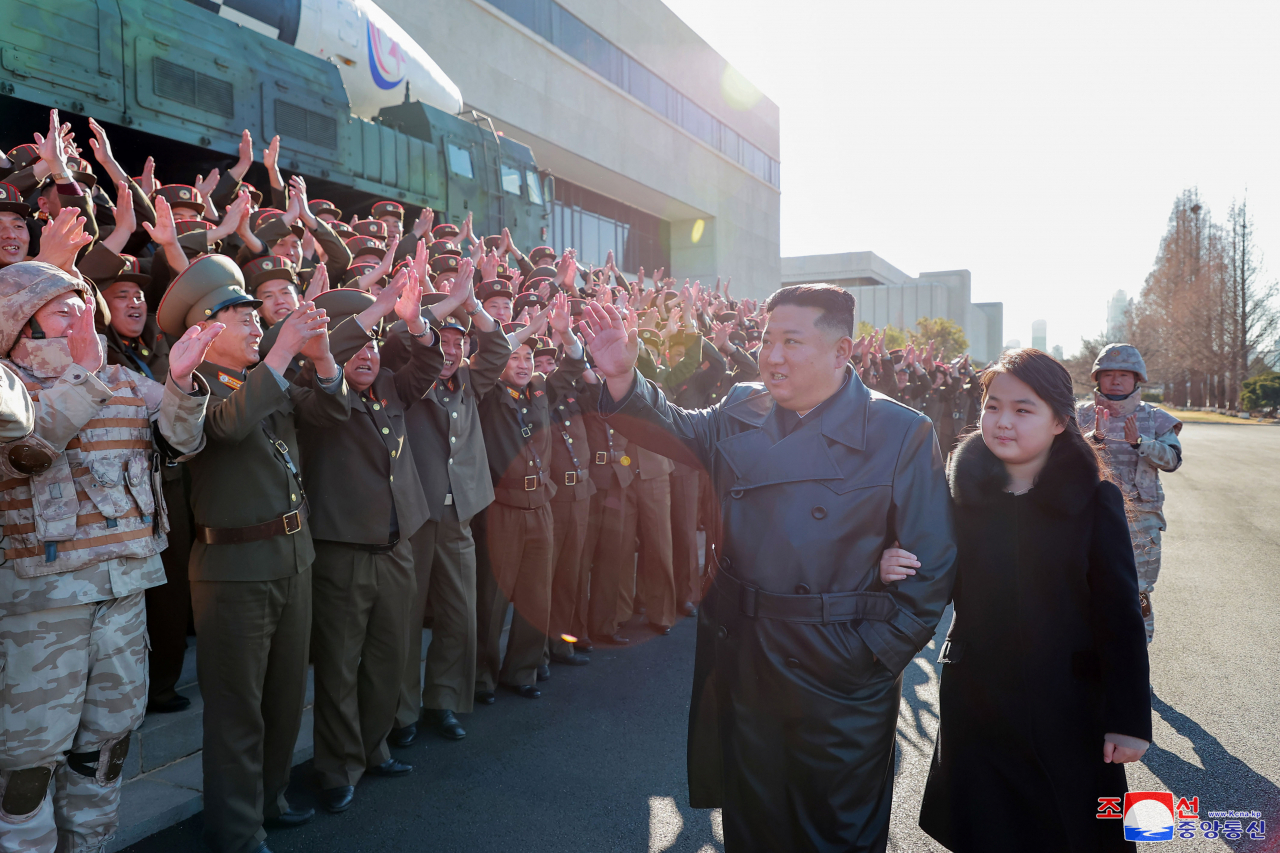 North Korean leader Kim Jong-un (left) walks hand in hand with his daughter, presumed to be his second child, Ju-ae, during a photo session with officials involved in this month's intercontinental ballistic missile launch, in this photo provided (Korean Central News Agency)

WASHINGTON -- The top diplomats and defense chiefs of the United States and Australia urged North Korea on Tuesday to engage in dialogue to completely denuclearize the Korean Peninsula, while expressing concerns over severe human rights violations in the reclusive state.

They also agreed to fully implement United Nations Security Council resolutions on North Korea to this end in an annual two-plus-two meeting, known as the Australia-US Ministerial Consultations.

"The principals reaffirmed their commitment to achieving the complete denuclearization of the Korean Peninsula and to addressing the Democratic People's Republic of Korea's unlawful nuclear and ballistic missile programs," a joint statement of the meeting released by the state department said, referring to North Korea by its official name.

The meeting between US Secretary of State Antony Blinken, Defense Secretary Lloyd Austin and their Australian counterparts -- Minister for Foreign Affairs Penny Wong and Deputy Prime Minister and Minister for Defense Richard Marles -- was held in Washington.

"Acknowledging their shared belief that diplomacy is essential to denuclearization and the establishment of a permanent peace on the Korean Peninsula, the principals called on the DPRK to engage in sustained dialogue and cease its destabilizing behavior," said the statement.

The US and Australian officials stressed the need to fully implement UN sanctions on North Korea.

"They committed to continued bilateral and multilateral coordination and reaffirmed the need for the international community to fully implement all relevant UN Security Council resolutions related to the DPRK," the joint statement said.

The four also expressed concerns over what they called "severe" human rights violations in the North.

"They noted with grave concern continuing reports of severe violations of human rights in the DPRK," it said.

The US last week designated North Korea as a state violator of religious freedom for the 21st consecutive year. (Yonhap)