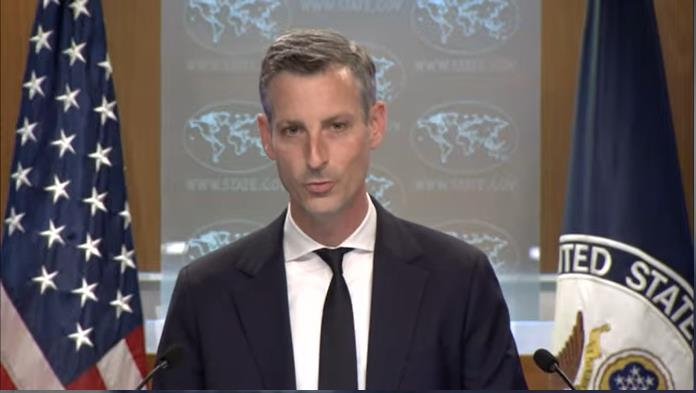 State Department Press Secretary Ned Price is seen answering questions during a daily press briefing at the department in Washington on Thursday in this image captured from the department's website. (Yonhap)

State Department Press Secretary Ned Price also highlighted that the Security Council resolutions in place had been passed unanimously by council members, including both China and Russia.

"There's only one reason why a UN Security Council resolution could come into existence, and that is because it was passed unanimously on the part of the permanent five members of the Security Council," Price told a daily press briefing.

"We think it is incumbent and, in fact, it is required under international law for countries to fulfill their obligations that come into force with the UN Security Council resolutions," he added.

Beijing and Moscow, who are both permanent members of the Security Council and are friendly to North Korea, have blocked all 10 UN Security Council meetings held this year to condemn North Korea's missile provocations or impose fresh UN sanctions on Pyongyang.

"And that is why not only the region but countries around the world should come together, hold the DPRK to account to push back on its provocations, but also to ensure that the global non-proliferation norm isn't further eroded by countries like the DPRK," he added.

The reports from human rights organization Safeguard Defenders suggested that China may be operating the so-called "Chinese Overseas Police Service Stations" in more than 50 countries, including the U.S. and South Korea, to intimidate or threaten Chinese nationals critical of its government and to eventually persuade them to return home where they face persecution.

"We continue to be concerned about PRC transnational repression. We take this issue very seriously," Price said when asked about the reports, referring to China by its official name, the People's Republic of China.

"This is a phenomenon that, unfortunately, is not unique to the PRC. It's something that we've called out on the part of other governments around the world and will work to counter regardless of where it's coming from," he added. (Yonhap)