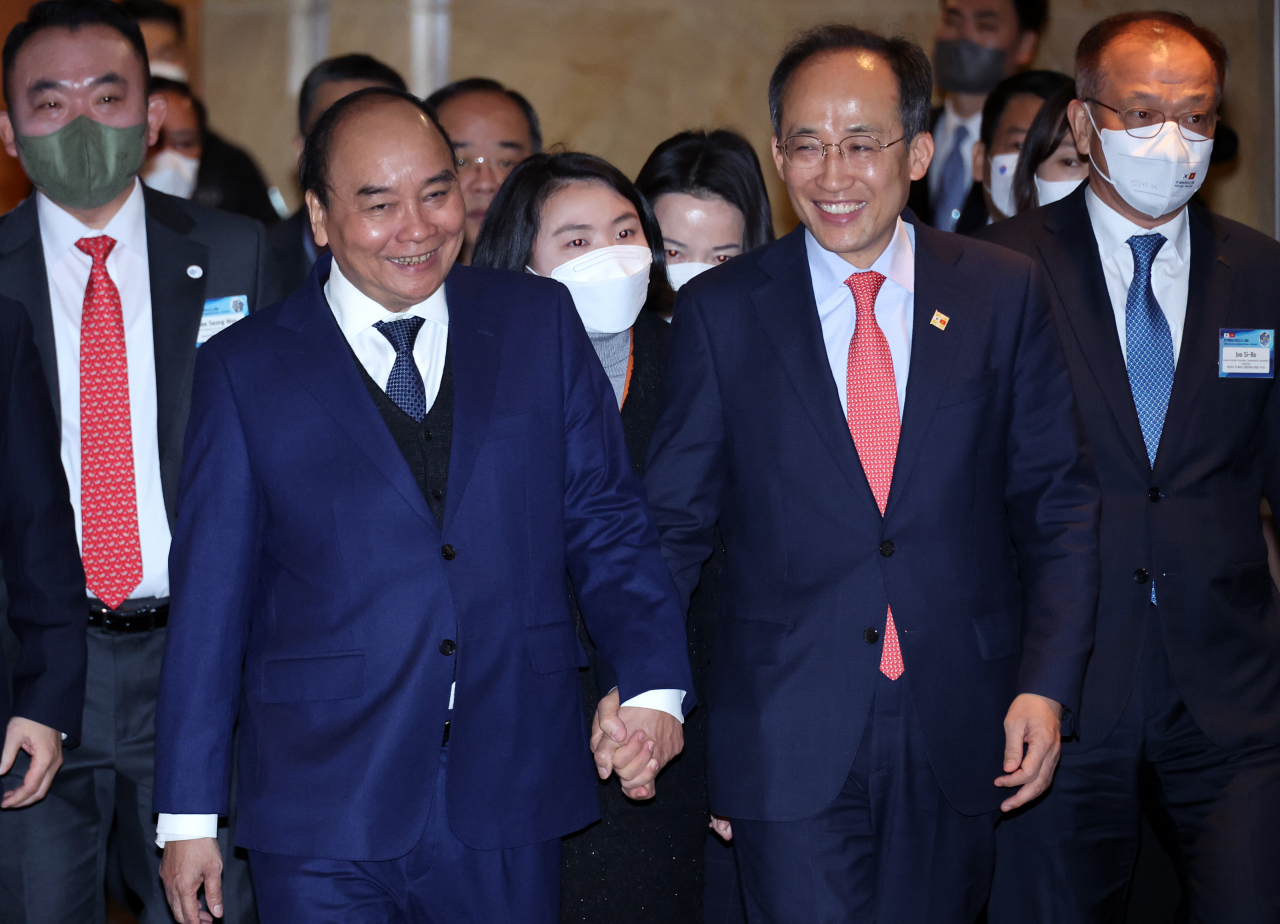 The Korea-Vietnam Business Forum, hosted by the Korea Chamber of Commerce and Industry, was held at Lotte Hotel Seoul on Tuesday to commemorate the 30th anniversary of bilateral diplomatic ties. The Vietnamese president and Korean Finance Minister Choo Kyung-ho attended the forum.

“Vietnam and Korea have the potential and opportunities to contribute to the Fourth Industrial Revolution,” Vietnamese President Nguyen Xuan Phuc said at the forum.

“I will support Korean companies that invest in Vietnam to pursue their economic activities in Vietnam effectively and continuously,” he said.

The Vietnamese president's state visit comes as Korea seeks to expand its reach into the Southeast Asian market amid the rising tension between US and China.

“With economic nationalism, bloc economy and competition for supply chain intensifying in the global economy, the two countries need to cooperate with each other in response to economic issues,” Joo added.

Some 200 business figures from Korea and 100 from Vietnam attended the forum to discuss cooperation between the two countries, mainly focusing on digital growth and green energy transition.

“Vietnam, whose growth is based on manufacturing businesses, must be concerned about reducing carbon emissions,” Hanwha Energy CEO Chung In-seop said. “The infrastructure investment and construction experience of the Korean energy industry and energy solutions based on liquefied natural gas, solar energy, hydrogen and energy storage system can contribute to Vietnam’s energy transition policy,” Chung added.

At the forum, 14 memorandums of understanding were signed, including those for the development of a smart city and high-technology industrial complex in Vietnam.

In a separate meeting with the Vietnamese president, automaker Hyundai Motor Group said it work toward expanding its production business in Vietnam. Local retail and entertainment mogul CJ Group also discussed expanding its various business ventures in Vietnam, ranging from food to culture.

The two countries also promised to cooperate on a governmental level.

Korea and Vietnam also committed to forging closer ties in the resources sector, particularly in seeking and processing rare earth materials. Vietnam, with some of the world's largest reserves of rare earth metals, is an important supply chain partner for Korea and its chip industry.

Korea and Vietnam agreed to expand their cooperation on vaccines and health care policies, along with population policies, ensuring national exchange on a ministerial level.

The two countries also agreed to cooperate on information and communications technology.

Separately, a joint statement from the two presidents stated that the bilateral relationship between Korea and Vietnam will be upgraded to the highest level of bilateral ties, to a “comprehensive strategic partnership” from the previous “strategic cooperative partnership.”