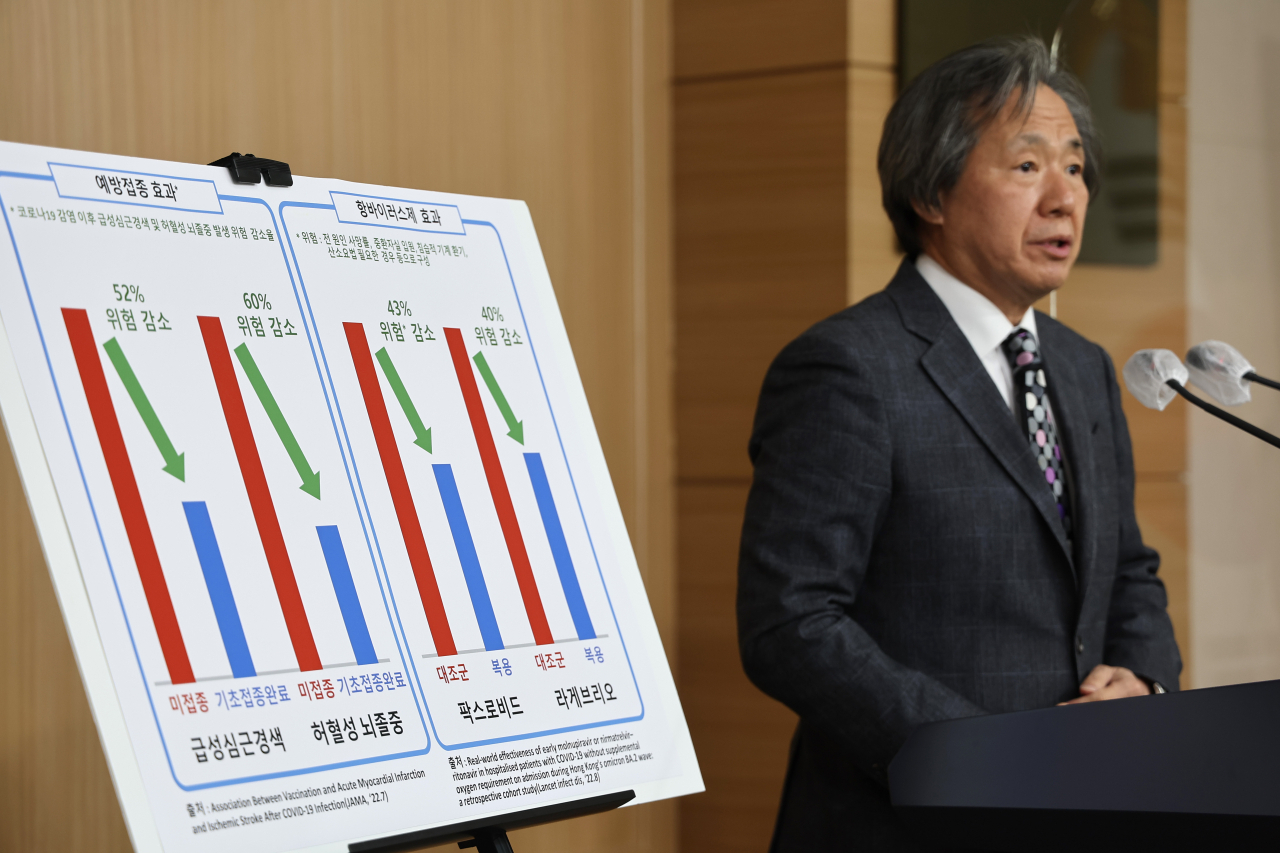 Jung Ki-suck, chair of Special Response Center of the Central Disaster and Safety Countermeasure Headquarters, speaks in a briefing held in Seoul on Nov. 21. (Yonhap)

Amid growing calls to revise the indoor mask mandate, South Korea's top adviser to the Yoon Suk-yeol administration for the handling of the pandemic played down easing the mandate, citing lingering safety concerns.

Jung Ki-suck, a medical pundit who chairs the Special Response Center of the Central Disaster and Safety Countermeasure Headquarters, said Monday at a briefing in Seoul that the premature decision to ease indoor mask rules could exacerbate the chance of infection for those at higher risk from the coronavirus, stressing the need for "uniformity" in following the rules nationwide.

Given that Koreans can travel to the other end of the nation and return in a single day, and that cold spells could trigger the spread of not only COVID-19 but also other diseases like the flu, the decision to ease mask rules must be done with prudence, he cautioned.

"An area prone to danger due to the easing of (the indoor mask rule) will see more patients, and there should be countermeasures ready if the patients there will spread (COVID-19) to other areas in Korea," Jung said.

"A sharp surge in infections in a certain area will force some of the patients there to be transferred to hospitals in other regions, and it is unfair for the other regions to accommodate them. ... Uniformity is key in COVID-related rules."

This comes as the city government of Daejeon and South Chungcheong Province announced plans to deviate from the indoor mask mandate, citing its lack of efficacy in disease prevention and the potential impediment to children's speech and language acquisition that masks pose.

This came soon after Daejeon Mayor Lee Jang-woo submitted a formal letter to the Central Disaster and Safety Countermeasure Headquarters that the city of 1.4 million people would autonomously ditch the indoor mask mandate beginning in January, should the government not lift the mandate nationwide by Dec. 15.

Political circles are upping the ante over the indoor mask mandate dispute. Rep. Kweon Seong-dong, former chair of the ruling People Power Party, called on the Yoon administration to "draw up plans on the preconception that the easing of the mask mandate would be implemented by no later than the end of January 2023."

According to the government, any easing of COVID-19 rules by the provincial and local governments must be done upon consultation with the Central Disaster and Safety Countermeasures Headquarters, while tightening mask rules can be done autonomously.

Under current Korean law, a violation of the indoor mask mandate is punishable with a fine of up to 100,000 won ($77).