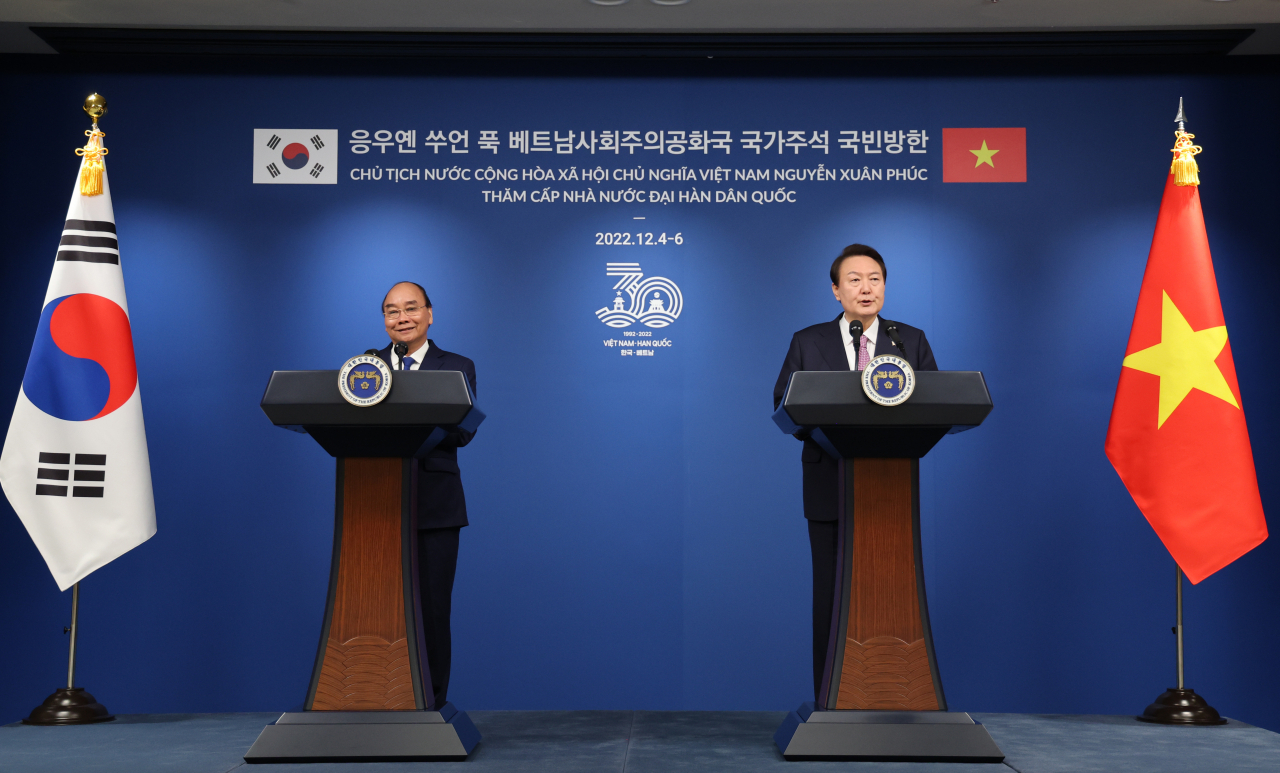 The South Korean and Vietnamese presidents agreed to take ties to a higher level at a summit held in Seoul on Monday, as Asia’s fourth-largest economy steps up its push to expand its reach into Southeast Asia amid the rising US-China tech rivalry.

The three-day summit, which started Sunday and had last taken place 11 years ago, is the latest highlight of the Yoon Suk-yeol administration’s drive to reduce its economic dependence on Seoul’s largest trading partners -- China and the US -- and to cultivate trading ties in Southeast Asia, where Hanoi plays a vital link to the larger market that the Korean leader calls “more important than ever.”

The decision to upgrade the 30-year-old Korea-Vietnam relations to a “comprehensive strategic partnership” from the strategic cooperative partnership -- the highest level to recognize bilateral ties -- marks a new era of cooperation led by deeper economic, security and cultural exchanges, according to a joint statement from Presidents Yoon Suk-yeol and Nguyen Xuan Phuc.

“For the last 30 years, Korea and Vietnam have worked to build a relationship based on reciprocal treatment, while embracing remarkable progress in bilateral trade and investment. We intend to usher in a new era by shaking hands on the new partnership we announce today, brought by the achievements so far,” Yoon said in the statement.

The two leaders doubled down on expanding economic ties, having inked a number of memorandums of understanding or preliminary deals on not only helping Korean businesses in Vietnam, but working together on high-tech sectors like biotechnology. Seoul, the largest investor in Hanoi, is seeking to tap into Hanoi’s rare earth minerals for a bigger foothold in global supply chains, while Hanoi is looking to take advantage of Seoul’s knowhow in technologies like chip, battery and auto production.

Just hours ahead of the summit in an interview with The Korea Herald, Vietnam’s foreign minister openly called for Korea’s help in its economic makeover, saying mutual exchanges are crucial in years to come as the two countries ride out together global headwinds, such as another wave of supply chain disruptions.

Meanwhile, expanding security ties was also discussed at the summit, chiefly by boosting defense and maritime exchanges, though the two leaders did not elaborate on what those exchanges would look like. Cultural exchanges, largely focusing on expanding Vietnam’s access to learning the Korean language in local schools, were cited as another point of agreement.

Yoon also discussed with his counterpart his Indo-Pacific strategy -- one of the latest pieces of his foreign policy that underscores a rules-based order and resists unilateral attempts to change the status quo by force.

Instead of fully endorsing the strategy, however, Phuc said he expects to see its “successful implementation.” Analysts say Vietnam, a longtime partner of China, likely found it uncomfortable to back Yoon in his pursuit of a “free, peaceful and prosperous” region. The campaign, according to critics, parrots the US, which seeks a “free and open” Asia-Pacific that respects international norms -- a move seen as a check on an increasingly assertive China.

How much meaningful support Seoul can muster from Hanoi for its Indo-Pacific plan remains unclear, despite the latest upgrade to their trade ties. Vietnam and China are also among the last five countries in the world ruled by communist parties, along with North Korea, Laos and Cuba.

Phuc leaves Seoul on Tuesday shortly after attending a business forum that brings together about 300 Korean and Vietnamese business leaders, including major Korean corporate chiefs. Business proposals to jointly run projects such as putting up nuclear reactors and smart electricity grids in Vietnam are expected to be the focus of discussion, according to sources.