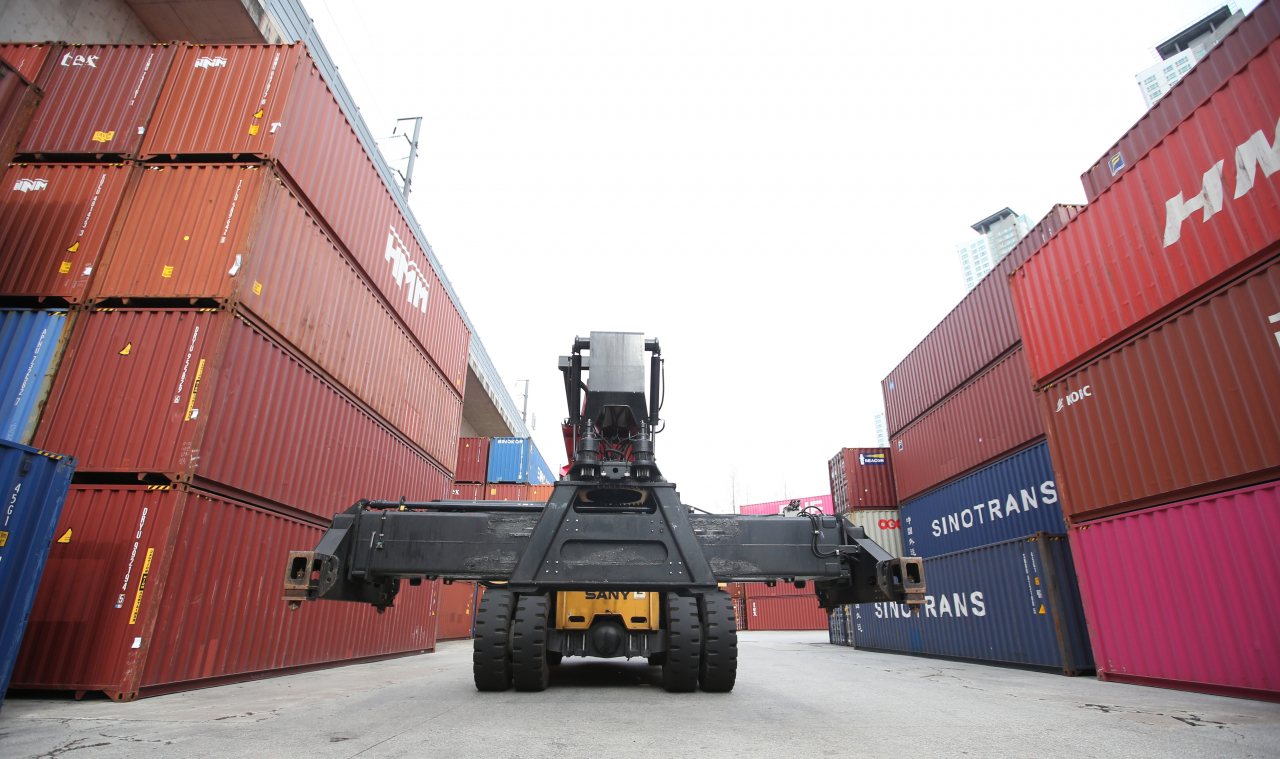 TIRES PILING UP -- Containers loaded with tires are stacked up at Hankook Tire's Daejeon plant logistics center on Sunday morning, as the Korean Public Service and Transport Workers' Union strike continued into its 11th day. As damage to the industry spreads due to the cargo union strike, President Yoon Suk-yeol called a meeting of related ministers to assess the strike situation on Sunday. (Yonhap)

President Yoon Suk-yeol has instructed officials to prepare the extension of the “work start order” for the oil and steel industries, calling the prolonged truckers' protests "political, illegal and violent."

President Yoon presided over a meeting with related ministers on Sunday afternoon, urging the ministers to prepare for immediate issuance of a work start order in the industries concerned about additional damage, such as oil refining and steel, according to a written statement released by the presidential office.

The meeting was attended by the Ministries of Finance, Justice, Industry, Labor and Transportation.

Yoon already had issued the work start order in the cement sector on Nov. 29. If an order to commence work is issued, truckers must withdraw their refusal to transport and return to work by midnight on the day following receipt of the order. If they fail to return without justifiable reasons, they can be subject to administrative measures such as suspension of operations, imprisonment for up to three years and criminal penalties of up to 30 million won ($23,000).

The president said the cargo union is taking away the freedom of others and holding the entire economy hostage for their benefit, calling it “a serious threat to the rule of law.”

He said acts of obstructing or threatening regular operations and retaliating against the owner of the normal operation are "all criminal acts that violate the law." He urged ministers to “use all administrative powers” to track down these illegal acts and “take swift and strict measures.”

Yoon also defined the general strike planned by the Korean Confederation of Trade Unions for Tuesday as a “political strike,” saying it does not represent workers’ rights.

According to government data, shipments worth a total of 3.26 trillion won were disrupted in major industries such as cement, steel, automobile, petrochemical and oil refining during the last 10-day strike.

Finance Minister Choo Kyung-ho told reporters after the meeting with Yoon that the government would hold legal responsibility until the end for the cargo union's collective refusal to transport. The government will “operate the available police force 24 hours a day,” and punish all truckers who refuse to return or induce a violation of the “work start order.”

The government also announced a plan to limit the payment of oil price subsidies for one year to truck owners who refuse to transport and to exclude them from toll reductions on highways for one year.

The truckers’ union has been on a general strike since Nov. 24, claiming that the government failed to keep its promise for continuing the safe trucking freight rates system that both sides had agreed on in June on the condition of ending the eight-day strike.

The safe trucking freight rates system is a measure that guarantees minimum cargo rates for truck drivers to prevent dangerous driving and overwork. It also imposes fines on shippers who pay less than the minimum rate. It was introduced as a three-year system in 2020 and expires at the end of this year.