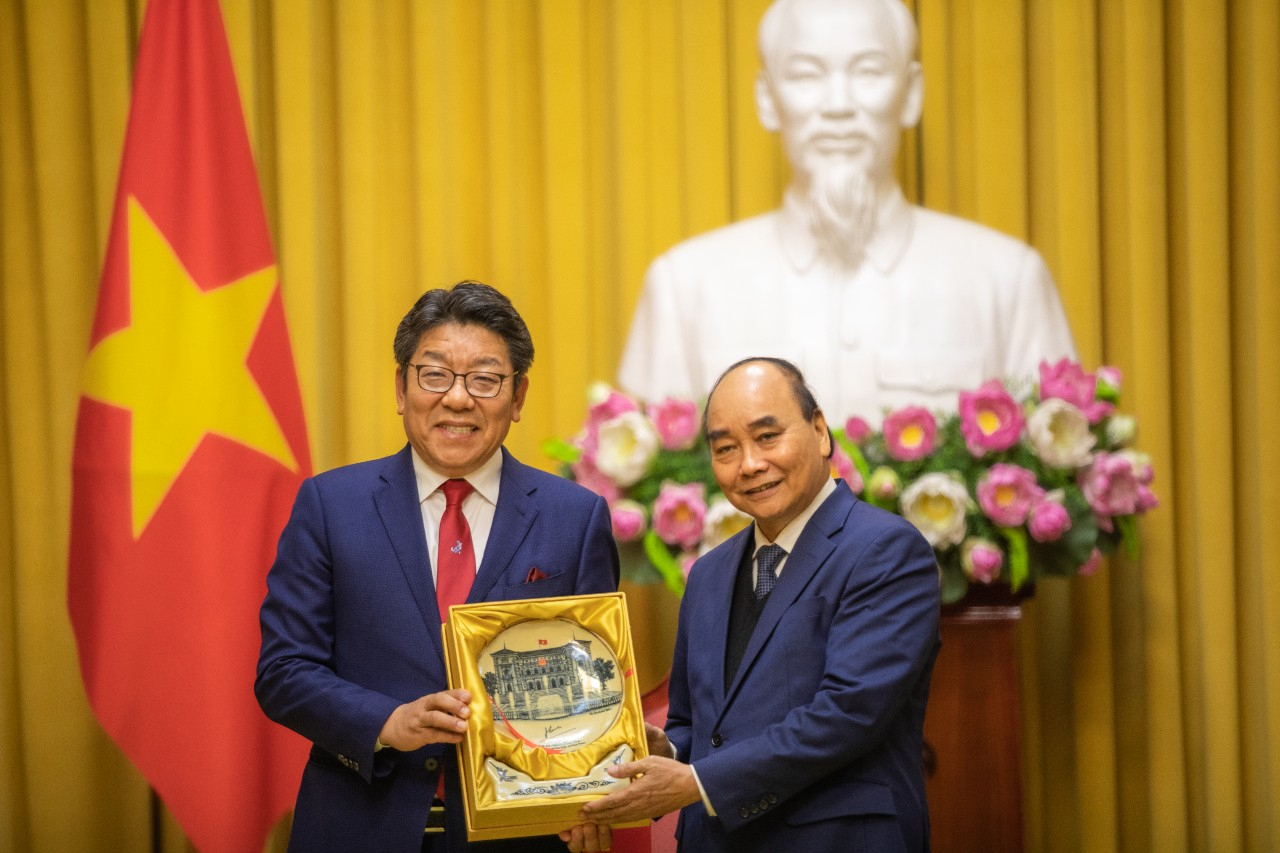 Vietnamese President Nguyen Xuan Phuc (right) and The Korea Herald CEO Choi Jin-young take a photo on Thursday at the presidential palace in Hanoi, Vietnam, after a meeting to commemorate the 30th anniversary of Korea-Vietnam diplomatic relations.

The meeting was attended by Park Hang-seo, head coach of Vietnam's national soccer team, Ambassador to Vietnam Oh Young-ju and leaders of the Korea-Vietnam Friendship Association.

The meeting came a few days before the Vietnamese president's three-day state visit to Seoul for the summit with President Yoon Suk-yeol on Monday.

Phuc highly commended the two nations’ efforts to promote friendship and economic and cultural exchanges and cooperation, according to an official of The Korea Herald who attended the meeting.

“With this state visit as an opportunity, the relationship between Vietnam and Korea will be elevated to the highest level of strategic partnership, and the two countries will open up a new and great future together,” Phuc said.

Choi also extended an invitation to the president to attend the Korea-Vietnam Economic Cooperation Forum 2022 to be held on Dec. 16 at Landmark 72 in Hanoi. The forum is cohosted by Herald Corp., the Korea International Trade Association and the Vietnam Chamber of Commerce and Industry. Herald Corp. is the publisher of The Korea Herald and Herald Business.

“About 500 top leaders in each field from Korea and Vietnam will participate in the forum to gather strength and wisdom to expand cooperation in economic and cultural exchanges,” Choi said, asking for Phuc's "deep interest and support."

Marking the 30th year of trade ties between South Korea and Vietnam, the forum will revolve around the standard of living, industries and wellness the two countries have sought to build together in the fourth-largest economy in Southeast Asia.

The Korea Herald CEO also asked for the Vietnamese government's full support in promoting investment and institutional improvement so that Korean companies in Vietnam can take root and flourish in the nation.