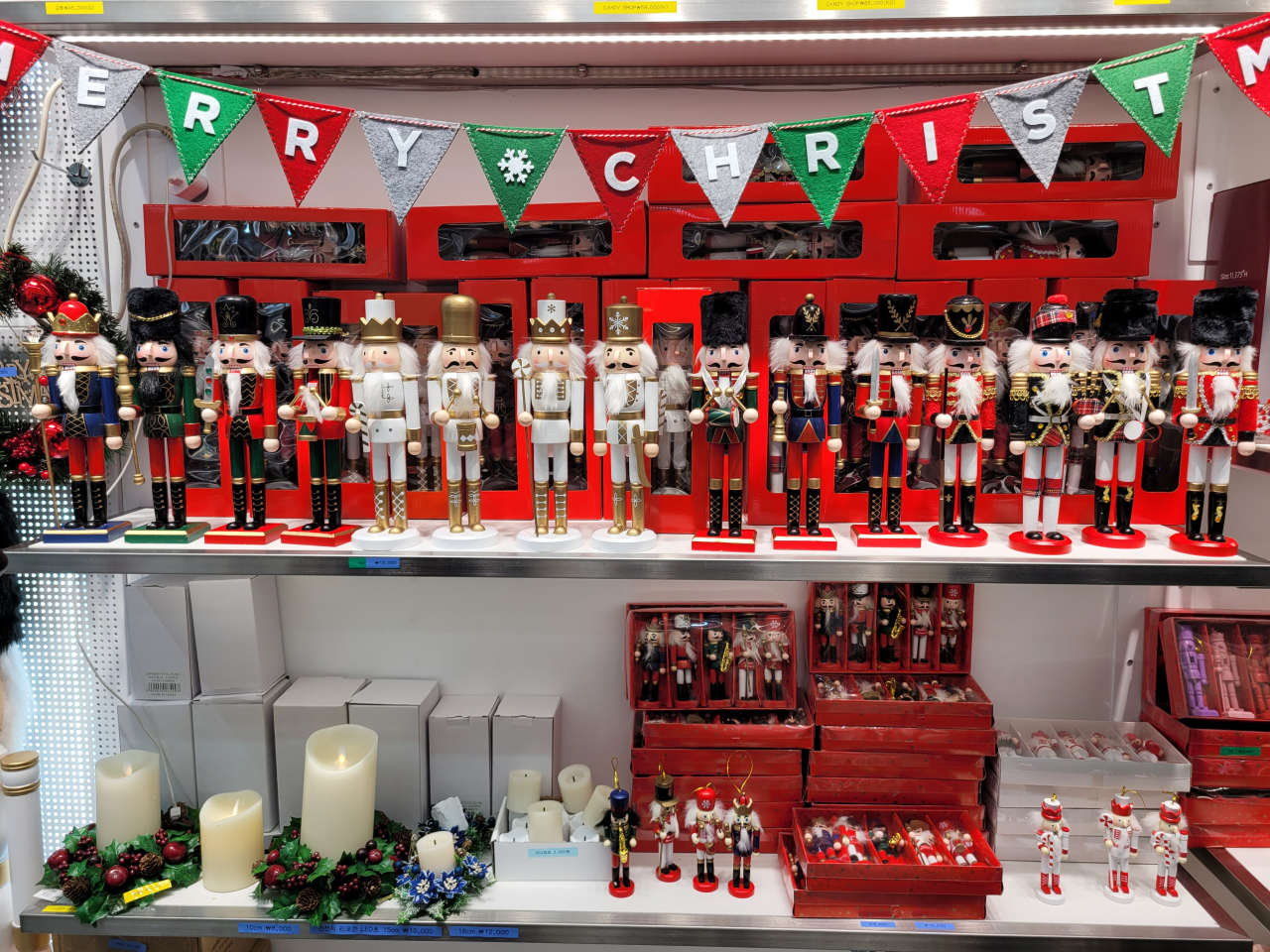 The time has come to bring out the Christmas tree and deck the halls with holly.

Online shopping has never been so convenient, but Christmas markets are always worth a visit if only to enjoy the holiday atmosphere. Here are two places you can purchase Christmas decorations at relatively lower prices.

Namdaemun Market, a large traditional market located next to Shinsegae Department Store in central Seoul, has a wide variety of shops, vendors and wholesalers offering a seemingly endless array of goods at lower prices. During the Christmas season, you will easily spot two small shops decked with Christmas ornaments as you walk up the market's main street. The shops do not have signs, but they will be difficult to miss as Christmas decorations will be on display outside and there will be people taking pictures in front of the shops. 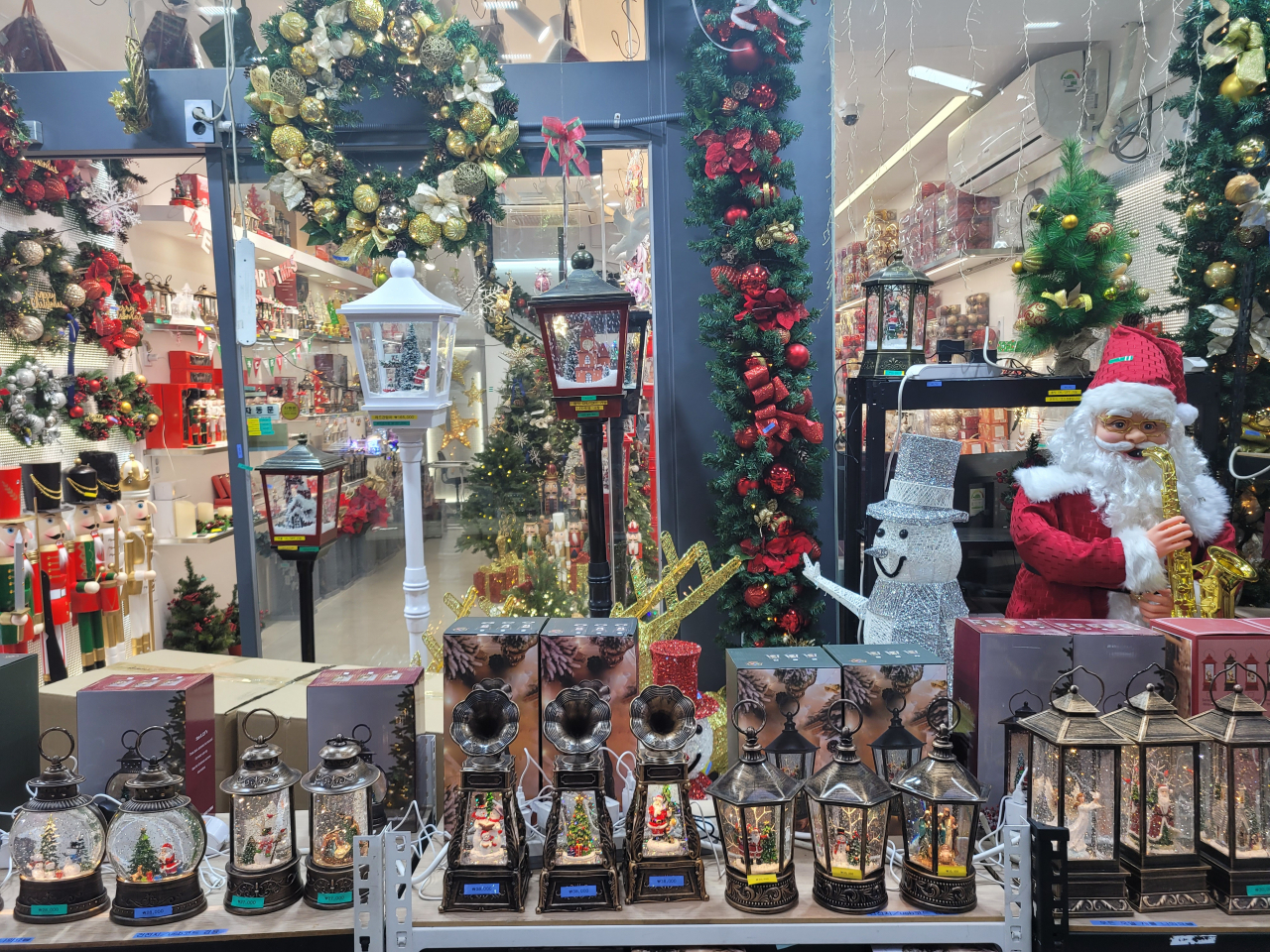 When you are done with shopping, stop by Shinsegae Department Store and Lotte Department store nearby to take in their fancy Christmas decorations. The large-scale Christmas media facade show at Shinsegae and the Christmas-themed shop windows at Lotte will put you in a Christmas mood.

Another place where you can purchase Christmas ornaments is Express Bus Terminal Station on Subway Lines 3, 7 and 9. After getting off the subway, walk up to the wholesale flower market connected to the subway station. There are a lot of Christmas shops and vendors on the third floor of the store that has a sign that reads “Flower Wholesaler.” 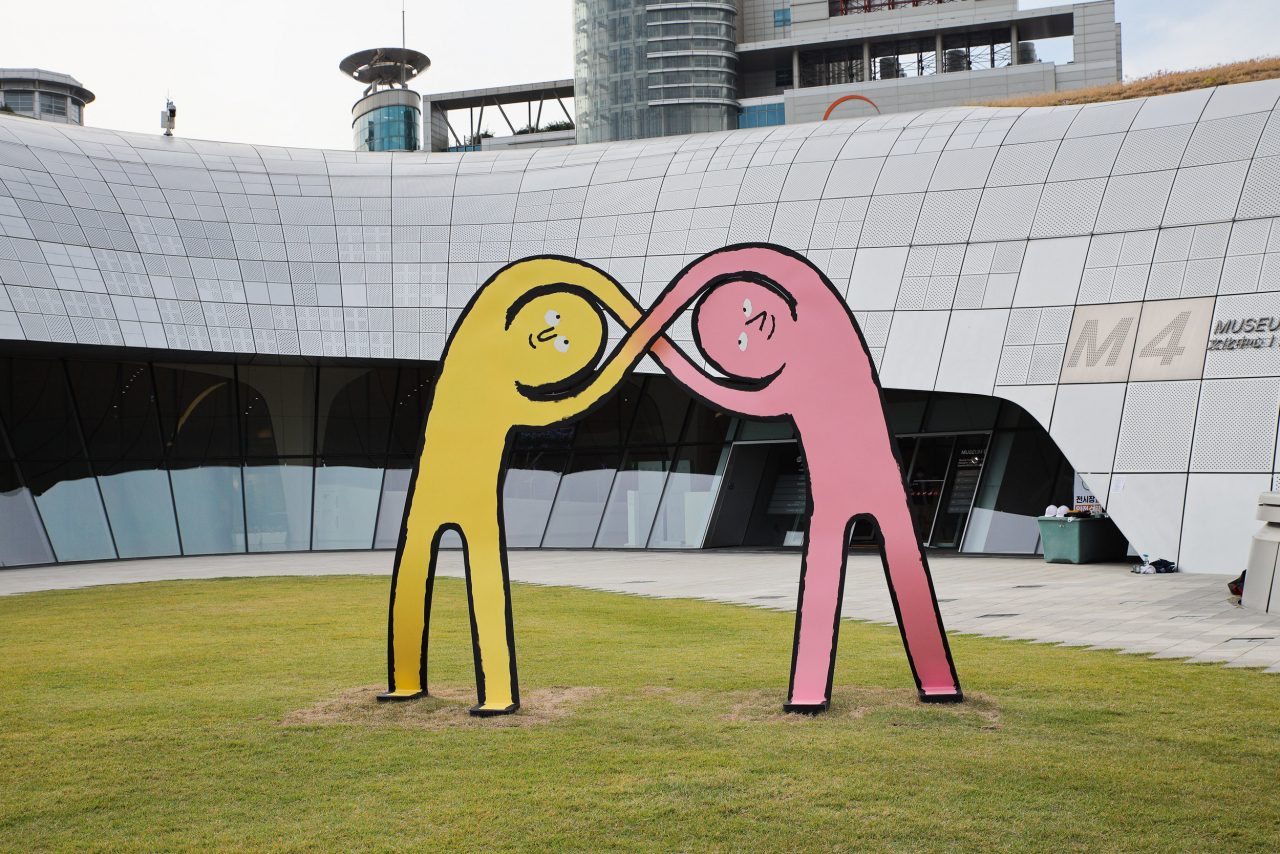 The name Jean Jullien might not be familiar but his work probably is.

An exhibition showcasing the works of the young French artist known for his witty depictions of daily life in simple and original drawings is now running at Dongdaemun Design Plaza in Seoul.

The first large-scale retrospective of the artist in the world shows about 10,000 works of art, including paintings, sculptures, objects and videos as well as 100 sketchbooks. 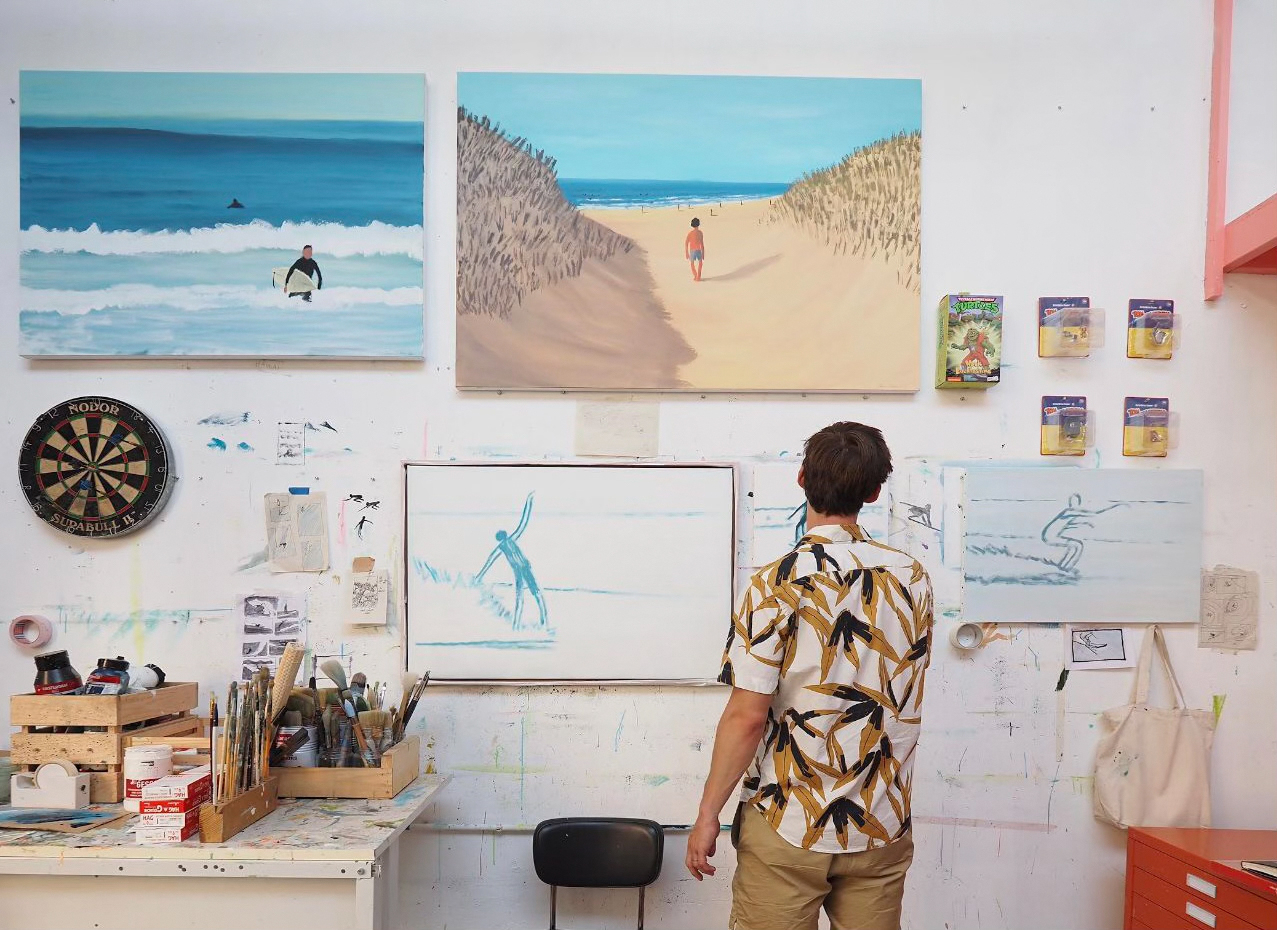 Born in 1983 in France, Jullien sees drawing as the best way to observe the world around us and communicate with others, across language barriers, which is why he works in a very simple way. 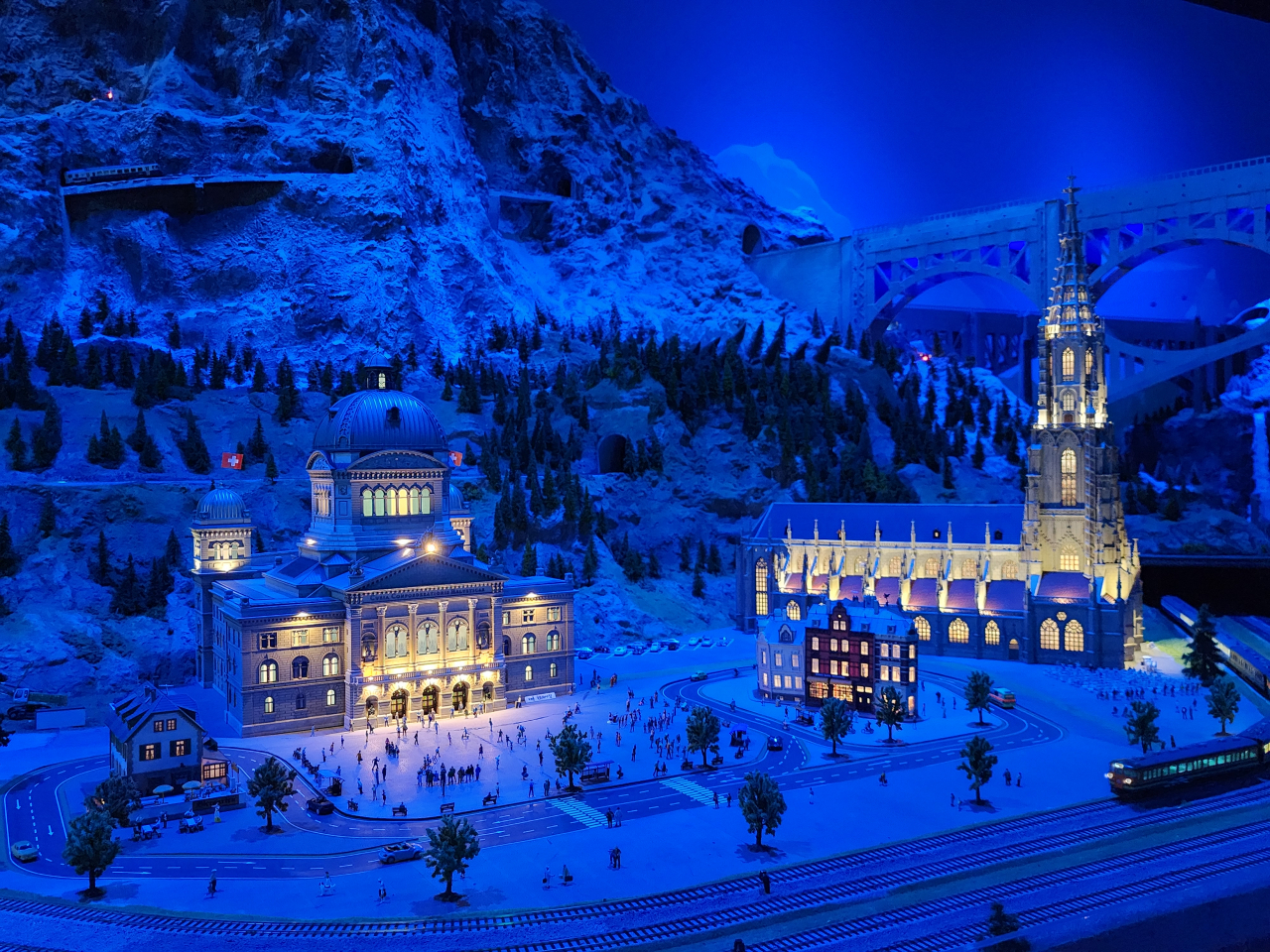 At the “Nowon Train Village -- Swiss Pavilion,” a diorama, or a replica of a scene in a three-dimensional miniature model, shows beautiful cities and rural villages of Switzerland against the backdrop of the Alps.

Starting with the city of Zurich with its City Hall and Fraumunster Church, the pavilion presents nine regions including the Reuss River at Lucerne; Interlaken railway station, parliament and the cathedral in Bern and the United Nations Office at Geneva. 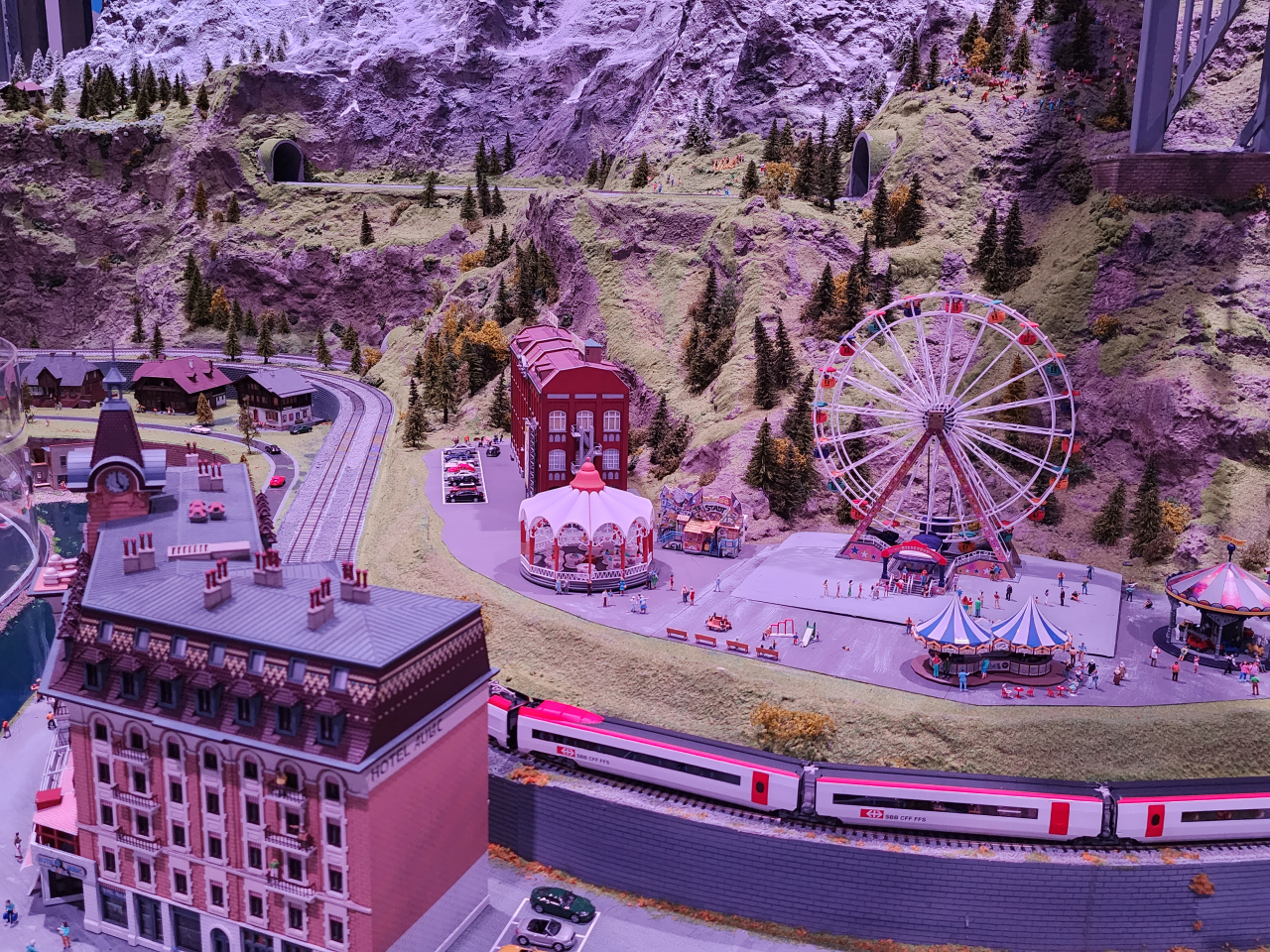 The miniatures come to life with the press of a button -- there are 34 buttons in all.

Various train models run on the tracks connecting the regions, passing through stations and disappearing into mountain tunnels. Cars, bicycles and pedestrians and even the swans on the lake come alive at the touch of a button. The miniatures are so detailed that you can even see the bicyclists pedaling.

The three major peaks of the Alps -- Jungfrau, Matterhorn and Mont Blanc -- make up the background. Piz Gloria’s mountain cable car goes up and down, a rescue helicopter is dispatched, and Heidi from the animated series “Girl of the Alps” plays on the swings. 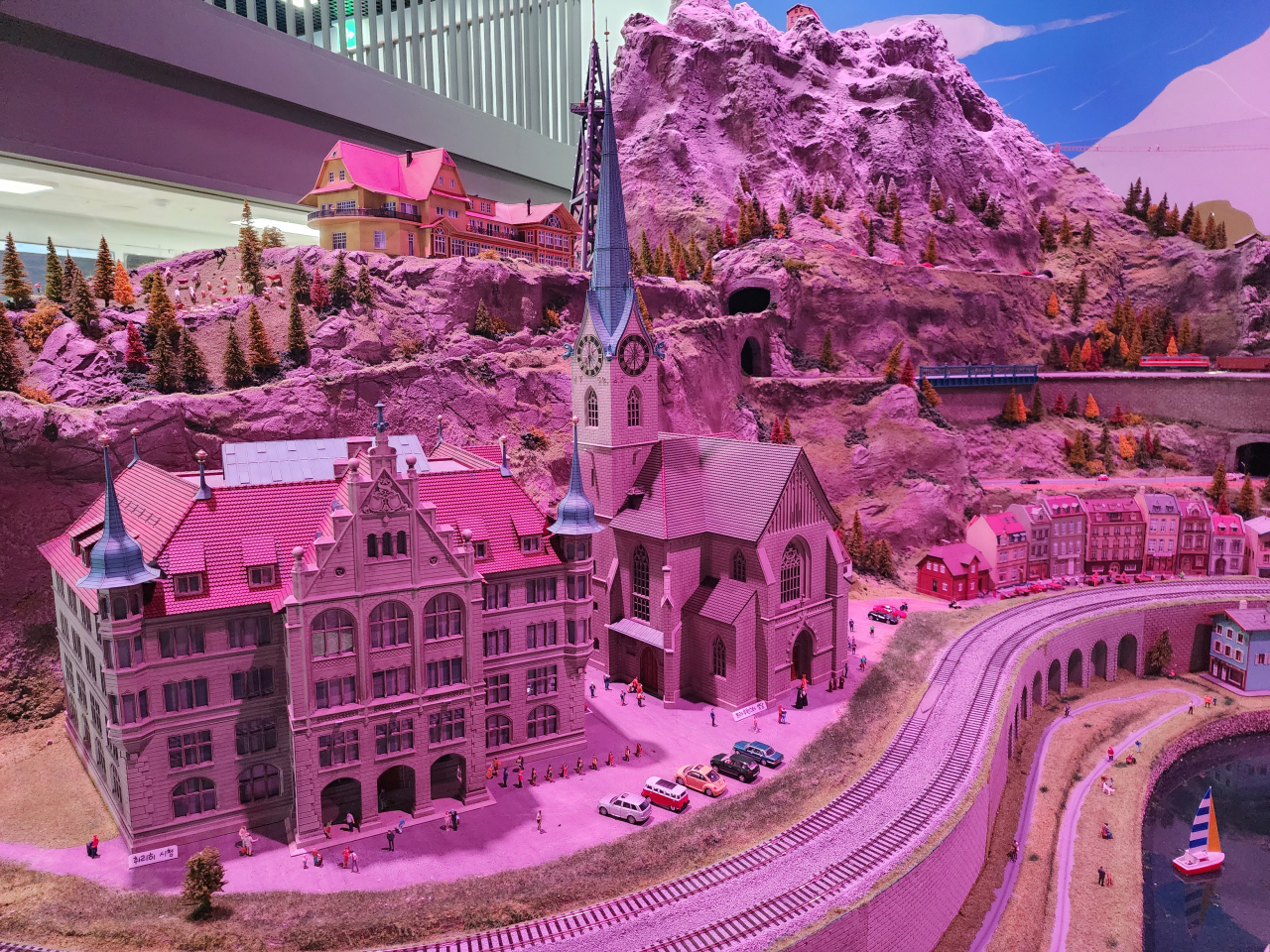 The lights change every 10 minutes to create daytime and nighttime views of the country -- pink for sunrise, blue for sundown and everything turns black at night.

The exhibition hall holds up to 50 people at a time.